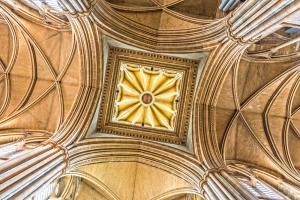 The name "Truro" developed from the Cornish for "Three Rivers", which tells you something of the geography of this, the county town of Cornwall. The town developed between the rivers Kenwyn, Allen, and Truro, as a port for exporting Cornish tin.

The history of the town goes back at least as far as the 13th century, when Richard Lucy, Chief Justice under Henry II, built a castle here, on the site now occupied by the Courts of Justice. By the 14th century, Truro had grown to become one of five stannary towns in Cornwall.

This meant that copper and tin had to be assayed here before being taxed, sold, and shipped elsewhere, a fact which brought prosperity and great growth to the town. During the English Civil War, a royalist mint was set up in the town, but defeat to the Parliamentary troops in 1646 ended that adventure. 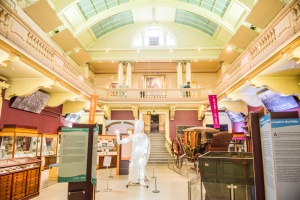 The Georgian and Victorian periods saw a real boom in Truro; industry flourished, led by tin smelting, and numerous elegant townhouses were built in the town - most by wealthy mine owners. The increasing wealth and importance of the town were recognised in 1877 when Queen Victoria granted it city status.

Dominating views of Truro is the splendid late Victorian Cathedral, with its three spires. The cathedral was begun in 1880, the first cathedral to be built in England since St. Paul's in London, though it took a further 30 years to complete the building. Unusually for a major building project, all the money to finance the building of the cathedral was raised by public appeal throughout the Duchy of Cornwall.

The cathedral was built on the site of the former parish church, and it retains the unique status of being both a cathedral and a parish church. The great central spire rises to a height of 250 feet, making it one of the highest in the country. There are regular guided tours of the cathedral available, though groups should pre-book. 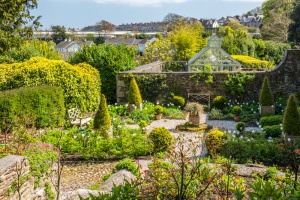 The Royal Cornwall Museum is located on River Street. The museum houses exhibits tracing the history of the Duchy of Cornwall from earliest times as well as collections relating to natural history, the mining industry, minerals, and pottery of Cornwall. More recent exhibits look at the popular Poldark television series and its creator, author Winston Graham.

On the outskirts of Truro is Bosvigo Garden, a series of colourful small garden areas surrounding an elegant Georgian house. The history of the house goes back to at least the 12th century, but the oldest part of the present building is late medieval.

More self catering near Truro

More bed and breakfasts near Truro