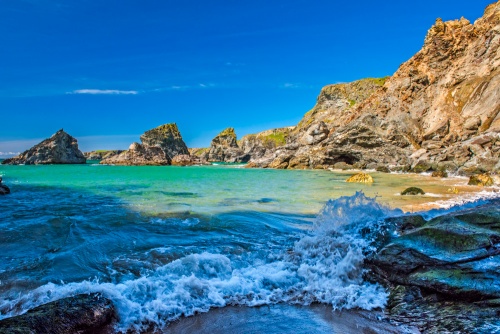 The Bedruthan Steps sea stacks from the beach

The Bedruthan "steps" are a spectacular series of rock stacks stretching across Bedruthan Beach. They first became a tourist destination when nearby Newquay became a popular resort in the Victorian period. Legend tells that the steps were built by a giant named Bedruthan, who used them as stepping stones to traverse the bay.

Unfortunately for students of Cornish folklore it seems that the legend was invented by late 19th century residents to tell their awestruck visitors.

Still another element of confusion surrounds the name "Bedruthan Steps". There is no certainty that the name refers to the rock stacks at all; it may equally well refer to the steps cut into the cliff that allow access to the beach. That certainly makes sense, for as you approach the sea stacks along the clifftop path it is hard to imagine how they could be construed as stepping stones - though one seems to resemble a gigantic foot.

One of the rocks is named Samaritan Island, after the ship of that name that wrecked upon the rock in 1846. Visitors are warned that treacherous tides make swimming dangerous. 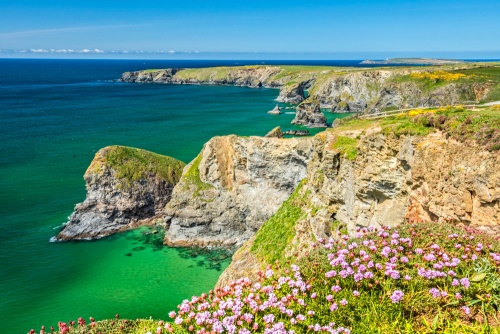 Approaching the Steps from the coast path

There are wonderful walks along the clifftops between Bedruthan and Carnewas, and the National Trust has built new steps into the sides of the cliff for access down to the beach. The steps are closed in the winter for safety reasons but you can still get wonderful views over the beach and sea stacks from the top of the cliffs.

The area around Bedruthan is also rich in prehistoric sites; within two miles there are no less than six Bronze Age barrows and two cliff castles dating from the Iron Age.

There is a large National Trust pay and display parking area on the B3276 between Trenance and Pothcothnan (free to Trust members). Or if you prefer to visit on foot, the Steps are directly on the South West Coast Path National Trail. Beside the car park is a cafe, toilets, and a National Trust information centre and shop, as well as a large map of the site showing footpaths in the area.

From the car park, a trail leads to the coast where it joins up with the South West Coast Path. You turn north and follow the trail for about 10 minutes. You can clearly see the sea stacks in the distance and the coastal scenery is simply stunning. Inland of the trail are large areas of gorse which produce a swath of yellow flowers in spring. 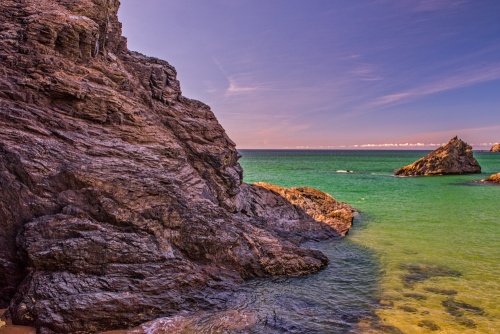 The trail descends to a cliff-top viewing area looking down on the sea stacks and the small beach. Beside the viewing area is a poignant memorial tablet set into the turf, commemorating a tragic drowning in 1903.

Beside the memorial flights of modern concrete steps lead down to the beach. Due to constant sea spray, the steps are usually wet and can be slippery, but there is a handrail all the way down. When the weather is extremely bad the steps are unsafe to descend and a gate at the top will prevent access. The view from the top of the cliffs is wonderful even if the steps to the beach are closed.

At high tide the last few steps are covered by water, but at low tide you can access the small, sandy beach at the bottom of the stairs.

Our family loved visiting the Bedruthan Steps. The scenery is typical Cornwall, that is to say, magnificent. The walk along the cliffs is among the best in Cornwall. Highly recommended. 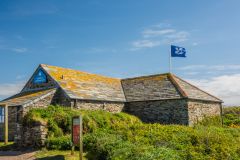 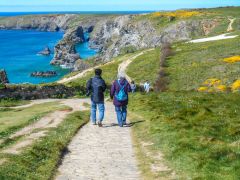 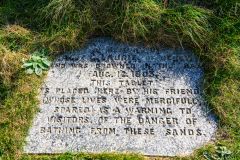 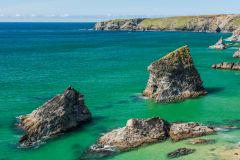 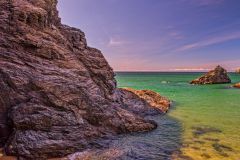 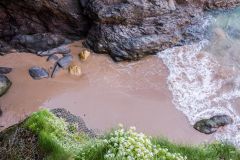 More self catering near Bedruthan Steps