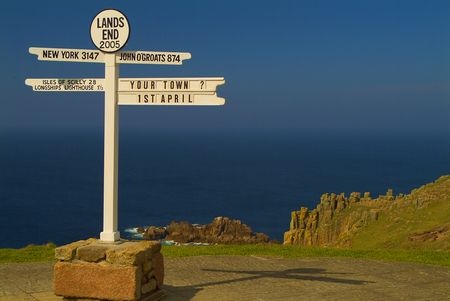 Land's End is the most westerly point of mainland England and is visited by hordes of tourists each year. Most obediently have their photograph taken beside the signpost by the cliffs, with arrows pointing to major centres around the globe.

Land's End Hotel has done its best to become a tourist attraction in its own right, with upgraded facilities, sound and light shows, a suspension bridge, play areas, exhibition halls, and a Lost Labyrinth attraction.

The cliffs at Land's End stand 200 feet above crashing waves, though the cliffs tumble down to nearly nothing at the furthest point of land.

Land's End has been the centre of Cornish legends. Some tales tell that the lost land of Lyonesse - a sort of British version of Atlantis - lies beneath the sea, and even that the spires of churches can be seen poking up from the ocean floor if conditions are right. Sailor's tales say that the sound of bells beneath the waves can be heard. Lyonesse was also said to be the lost Camelot of King Arthur legend.

Around the point from Land's End is Sennen, where a very popular beach draws visitors in search of sun and sand.

More self catering near Land's End

Self Catering near Lands End