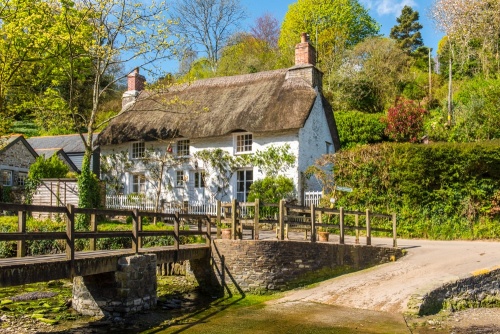 A thatched cottage by the ford in Helford

A lovely old village in southern Cornwall, Helford was once a busy port until the Helford River silted up. Readers of Daphne DuMaurier's classic novel, 'Frenchman's Creek' will be familiar with Helford's reputation for smuggling. Du Maurier spent her own honeymoon here and was inspired by the romance of the port's smuggling past to create her only romance novel.

A wooded trail from the top of the village leads along the coast to the original 'Frenchman's Creek', a secluded waterway used by du Maurier as the inspiration for her novel. The footpath starts at the end of the paved road, just past the pub. The area around Frenchman's Creek is a popular bird habitat and is especially rich in herons.

The village of Helford makes an excellent centre for exploring the Lizard peninsula. The Helford Estuary marks the northern, softer edge of the Lizard. This is an area of gardens, gentle breezes, and quiet villages.

Helford itself was once a major centre for tin export, but today it is a secluded backwater, notable more for the wealthy sailing community who make it a regular stop. You will likely find the harbour filled with yachts and pleasure craft. 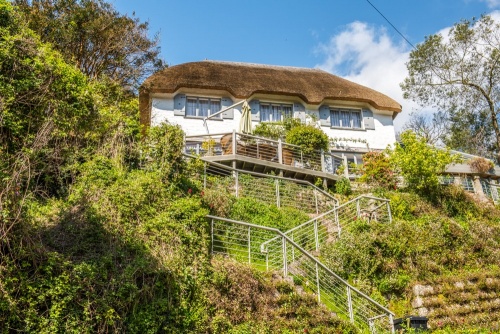 Another thatched cottage, near the village stores

It is hard to imagine the quiet waterside village of Helford was once a bustling port, with smugglers, fishermen, and trading ships docking here. So busy was trade from the European continent that a customs house was set up by the harbour.

The formation of Loe Bar meant that Gweek became a better port, and activity at Helford died away. When the Cornish tin mining industry collapsed, many miners emigrated from Helford, with quite a large number sailing to the new mining areas of Australia.

Near the mouth of the Helford is the medieval church of St Anthony-in-Meneage, outside Gillan harbour. The church is said to have been built by Normans shipwrecked by a dreadful storm and dates to at least 1170. In Pengwedhen Wood is a small chapel built in 1930 and dedicated to St Francis.

The village pub is the thatched Shipwrights Arms, which was built as a farm, and was then transformed into an inn with rooms, and then into a traditional pub. Other interesting historic buildings include Rosemullion, a pretty thatched cottage, dating to at least 1660. Another is Penkestle, near the footbridge at the head of the village, which dates to the 18th century and is the only house in Helford from that period with stone chimneys. 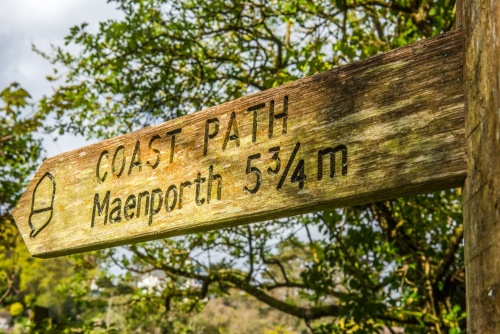 You can explore the Helford area on the coast path

A seasonal pedestrian-only ferry carries foot passengers across the river mouth to the hamlet of Helford Passage on the north bank. The Cornish Coastal Footpath can be joined at the beach, offering fairly gentle walking and good views. Boats and dinghies can be hired to explore the estuary. At Porth Navas is an oyster farm traditionally owned by the Duke of Cornwall.

Helford is very well placed for several of the most famous of Cornwall's many attractive gardens. Just 2 miles away is Trebah Garden, with Glendurgan Garden only slightly further. The busy port of Falmouth, with historic Pendennis Castle, is only 5 miles away, while the Cornish Seal Sanctuary is located one mile up the Helford River at Gweek.

If you come by car be aware that vehicles are prohibited in the village itself. There is a large, free parking area at the top of the hill leading down into Helford. From the parking area, it is a very short walk down the roadside into the village.

You emerge from a belt of trees to find yourself at a picturesque ford across the creek, with a pretty wooden clapper bridge leading to a thatched cottage on the far bank. Turn right as you cross the footbridge and stroll along the road as it runs beside the inlet, and where you can see boats drawn up by the bank at low tide.

A very short stroll past more thatched cottages brings you to the villages stores and just beyond, the village pub, with a riverside deck to sit and admire the views. Beyond the pub, the road peters out and becomes a path leading along the shore to the pedestrian ferry landing.

It doesn't take long to explore the village itself, but once you do, you won't want to leave. I speak from experience, for no sooner had we finished our visit than I immediately started looking into renting a holiday cottage in Helford so I could enjoy a longer stay. 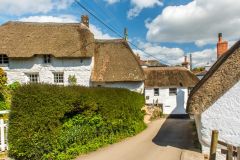 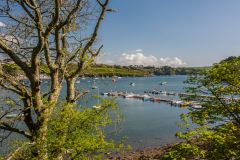 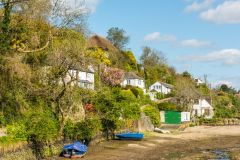 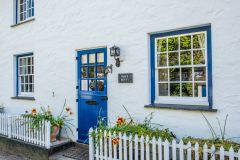 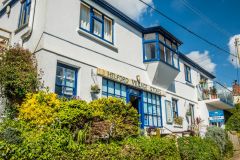 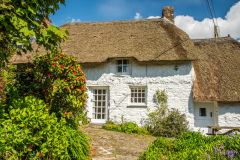 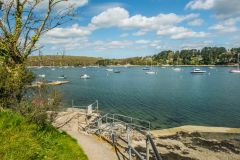 More self catering near Helford

More bed and breakfasts near Helford

Self Catering near Helford