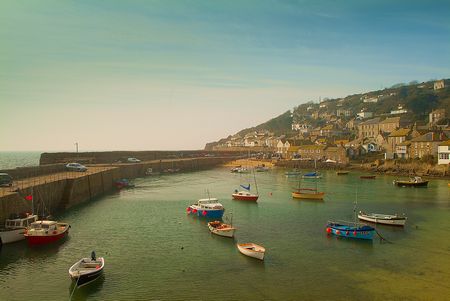 As every guidebook to Cornwall will be sure to mention, the name of this attractive little fishing village near Penzance is pronounced "Mowzel". Mousehole has been called one of the prettiest villages in Cornwall, and with good reason. It is a maze of narrow, winding streets lined by cottages built of local dark grey stone. Within the harbour are two small beaches.

In the churchyard at nearby Paul is the grave of Dolly Pentreath, a native of Mousehole and reputedly the last living person to speak Cornish as her native language. Outside the almost circular harbour is St Clement's Isle, once home to a religious hermit. Along the coast is a huge cave, said to be the source of the village's unusual name.

The road into the village is extremely narrow, and parking is quite limited so visitors are encouraged to park their cars at the parking lot outside the village and walk in, or use the regular bus from Penzance.

Mousehole has its own unique holiday. December 23 in the village is Tom Bawcock's Eve, in memory of a famous episode in the village's past. It seems that long ago bad weather forced fishing boats to stay in the harbour, and the villagers were faced with starvation. In a short lull in the storm, one brave man by the name of Tom Bawcock managed to catch enough fish to keep the villagers alive until the storm abated. The fish was baked into a large pie, called Star Gazzy Pie.

Each year on December 23 Star Gazzy Pie is eaten at the inn on the quay to commemorate the event, and the village is lit with spectacular lights. Most of the illuminations are in the shape of traditional Christmas characters, but there is always a Star Gazzy Pie created in lights!

More self catering near Mousehole

More bed and breakfasts near Mousehole

Self Catering near Mousehole