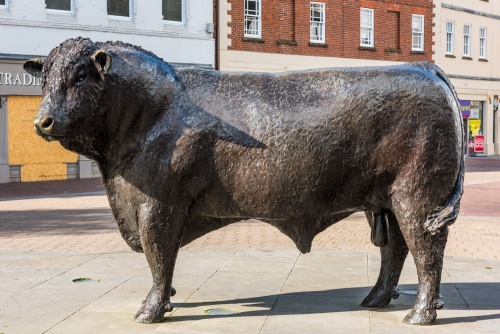 One of Hereford's most modern public sculptures is a life-sized statue of a Hereford bull. The statue was a gift to the city from Clive Richards and was designed by the architect Brian Alabaster. The statue is a precise replica of a Hereford bull, with every feature measured to an exacting standard.

Hereford cattle originated in Herefordshire, though they are now found around the world. As of 2020, an estimated five million purebred Hereford cattle were living in over 50 countries worldwide. It is one of the oldest British breeds, originating in the middle of the 18th century.

The city's links to the breed are also recognised in the sporting area; the city's football club, Hereford United, is nicknamed The Bulls.

The bull stands directly in front of the iconic timber-framed Black and White House Museum at the eastern end of High Town.

The statue's location proved controversial when it was erected in 2012. Several city councillors complained that trees had to be removed to provide a space for the statue, which stands 1.6m high (5.2 feet). 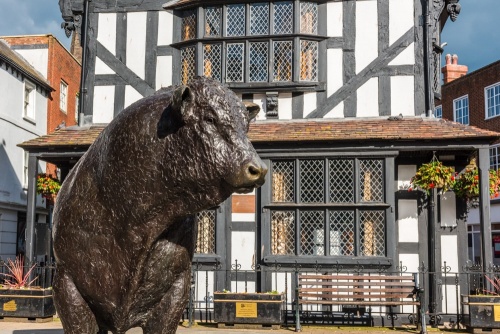 The Bull Statue and the Black & White House Museum

Another controversial feature was the choice of material; the statue was cast from bronze, which has weathered to a very dark, almost black colour, whereas Hereford bulls are naturally brown and white.

Despite the controversy, the statue has proven a big hit with visitors and you will often find people having their photos taken in front of the statue, with the timber-framed Black and White House acting as a backdrop.

The statue isn't signposted but it stands in front of theBlack and White House Museum, which is very well signposted for pedestrians around the city centre. It is at the junction of Commercial Street and the eastern end of High Town.