HERITAGE HIGHLIGHTS:   Grade II listed memorial in the style of an Eleanor Cross 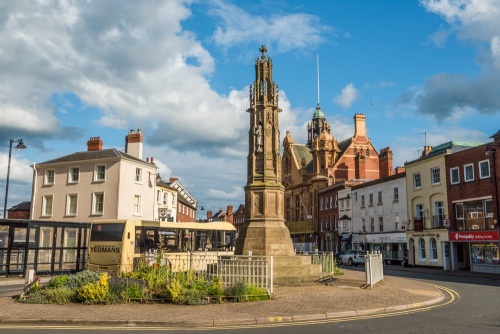 Hereford's War Memorial with the Town Hall beyond

Standing in isolation on a traffic island near the bus depot in St Peter's Square stands Hereford's impressive war memorial, erected in 1922 to commemorate the fallen of WWI but later adapted to remember those who fell in subsequent conflicts.

The 30-foot high memorial is inspired by the 13th-century 'Eleanor Crosses' erected by Edward I in memory of his wife, Queen Eleanor of Castile. Compare the memorial design in these photos with an authentic Eleanor Cross at Geddington, Northamptonshire.

The monument was designed by the architect Leonard William Barnard of Cheltenham. It is an octagonal column of ashlar sandstone with a Perpendicular Gothic lantern and finial decoration. It is inscribed with military insignia, civic arms, and statues representing branches of the Armed Forces.

The story behind the memorial is explained in a modern plaque affixed to iron railings. The plaque reads:

The Hereford War Memorial
Designed in the form of an Eleanor Cross, the 30ft high Memorial was unveiled and dedicated on 7th October, 1922 in commemoration of about 2000 Herefordshire service men and women who gave their lives in the 1914-1918 War. It was committed to the permanent charge of Hereford corporation.

Included in the design by L.W. Barnard, F.R.I.B.A are 8 badges representing almost all the services in which Herefordshire forces were engaged, 4 shields displaying the ancient and modern Arms of the City of Hereford and carved natural foliage and fruit of the apple, hop, and mistletoe.

Stone for construction was from Darley Dale quarries, the steps are of Cotswold peagrit stone and the 4 figures are in Portland Stone.

Later inscriptions commemorate those from Herefordshire who fell in the Second World War, all those who fell in Korea and during the Falklands Conflict and soldiers of the Special Air Services Regiment who have died in action.

The Memorial, now a Grade 2 listed building, was repaired, renovated and established in a new setting by Hereford City Council with assistance from English Heritage in 1988 and was rededicated on 9th April, 1989 by the Lod Bishop of Hereford. 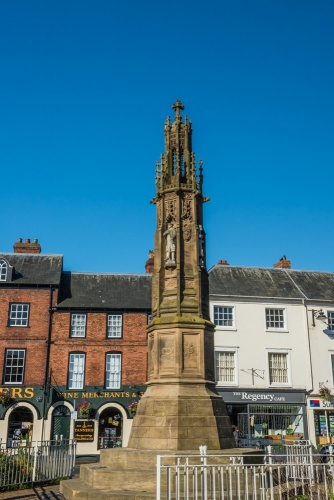 The War Memorial is in the style
of an Eleanor Cross

Not mentioned on the plaque is that there are also recent inscriptions on the memorial to the fallen of Burma, Afghanistan, and Iraq.

The inscriptions on the memorial column are as follows:

The men of Herefordshire who fell in World War II

1941-1945
When you go home tell them of us and say, for your tomorrow we gave our today. Their memory hallows in the land they loved.

Falklands
To the Fallen during the Falklands Conflict 1982 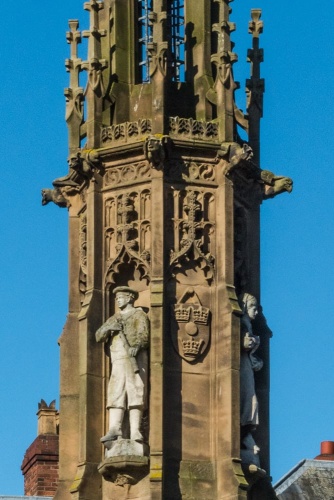 The war memorial is directly opposite St Peter's Church, while the Shirehall is a stone's throw to the east. It is within easy walking distance of the city centre.