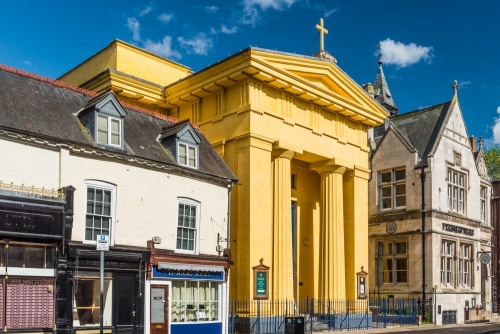 St Francis Xavier Church is a stunning neoclassical Roman Catholic church facing onto Broad Street in the heart of Hereford. The church is [almost literally] overshadowed by the neighbouring Cathedral, but it is well worth exploring this beautiful 19th-century building.

Before the English Reformation this site on Broad Street, just north of the Cathedral, was the home of a convent dedicated to St Catherine. During the Georgian period, a house on the site of the convent was owned by two maiden sisters of the Etheridge family. The sisters were devout Catholics and used one of the upstairs chambers as a chapel, administered by the Jesuit order.

In 1829 the Catholic Emancipation Bill was enacted, allowing Catholic worship (though it would not be until 1850 that the Catholic Church was re-established in England). As a result, plans were made for a Catholic church. 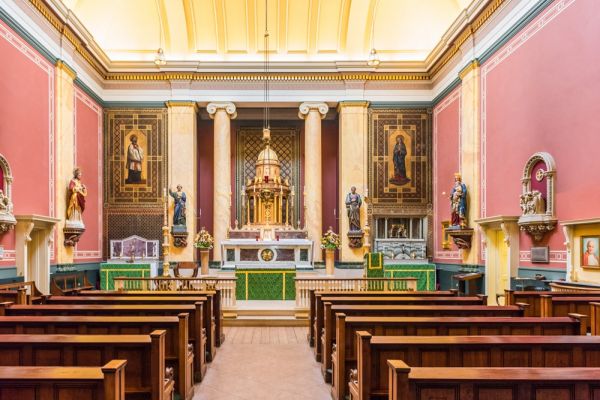 St Francis Xavier Church was begun in 1837 and opened for worship in 1839. The foundation stone was laid on 19 September 1837 and, unusually for the head of the Anglican Church, Queen Victoria sent the High Sheriff of Herefordshire, Thomas Mornington, as her personal representative to the ceremony. This was the first time in 300 years that the reigning monarch had a representative at a Catholic ceremony.

The architect for the new church was Charles Day of Worcester, who also designed St Edmund's Church in Bury St Edmunds, Suffolk, in the same year. The finished building cost roughly Â£16,000, and all expenses were born by the Jesuit order.

The first thing you notice about Day's design is that there are no windows to illuminate the body of the church (there are two small windows in the portico). This was intentional; officials feared that anti-Catholic sentiment might lead to any windows being broken. 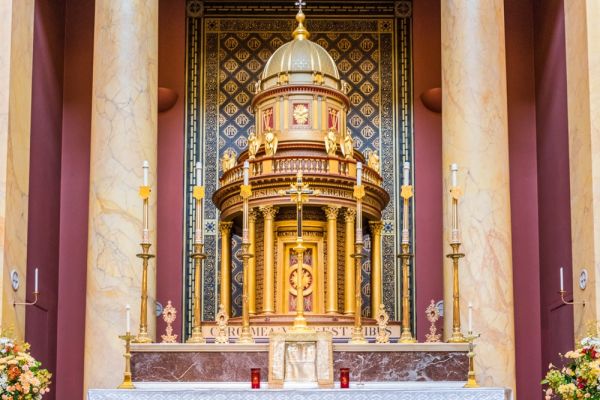 The design was in Greek style, using the Doric order. The front facade with its large neoclassical portico is modelled on the Treasury of the Athenians at Delphi, Greece. The interior is a typical hall church layout, with a coved ceiling and a lantern dome admitting light.

The dome is 60 feet above the floor and its curved ceiling is beautifully decorated with 390 golden stars on a background of dark blue. The ceiling design is based on the ceiling of the mausoleum of the Empress Galla Placidia in Ravenna.

Behind the ornate high altar is a gilded tabernacle modelled on the one at the Chapel of the Blessed Sacrament of St. Peter’s in Rome. The tabernacle holds relics of The Venerable Bede, St Francis Xavier, Pope Pius X, St Francis de Sales, and St Jane de Chantal.

Lining the walls are 14 Stations of the Cross. These are modelled on designs first shown to the public at the Great Exhibition of 1851 in London.

To the right (south) of the altar is the shrine of St John Kemble, one of the Forty Martyrs of England and Wales. 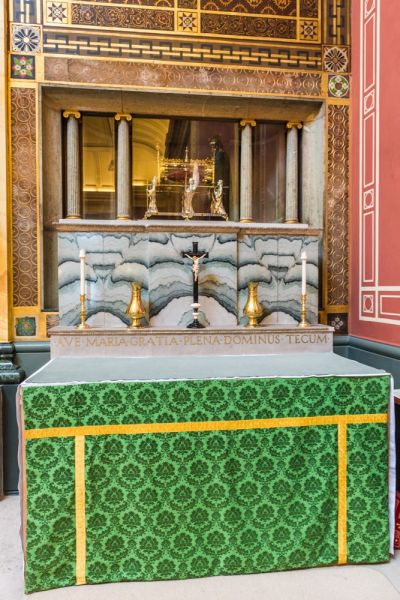 John Kemble as a Jesuit priest executed in the furore following the Popish Plot scandal in 1679. Kemble was born in 1599 at St Weonards, Herefordshire to a wealthy recusant family. Four other members of the family entered the Roman Catholic Church.

John Kemble was educated in France and returned to Britain in 1625 as a missionary, travelling throughout Monmouthshire and his native Herefordshire from a base at Pembridge Castle. He was arrested on 7 December 1678.

He was acquitted of any involvement in the 'Plot' but was found guilty of being a Catholic priest, a treasonous crime. Though sentenced to be hanged, drawn, and quartered, Kemble was allowed to die on the gallows. He was executed at Widemarsh Common on 22 August 1679 at the age of 80. He was buried at Welsh Newton but one of Kemble's hands is preserved in his shrine here at St Francis Xavier Church. He was beatified in 1929 canonised in 1970. 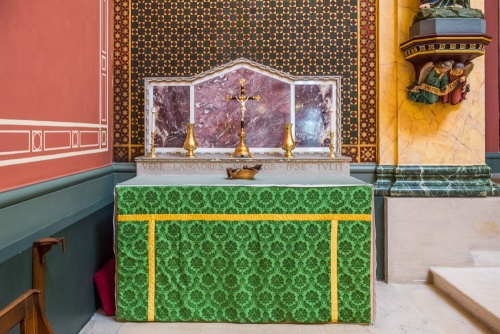 A more recent addition to the church is a shrine dedicated to St John Paul II.

The original church organ was given in 1850 and was played by Edward Elgar on numerous occasions. Unfortunately, it decayed to the point where it had to be replaced by the present digital instrument.

The church was in such a poor state by 1995 that the archdiocese put it up for sale, thinking that the expense of repair would be too great. A group of parishioners formed a charity and applied for grants from the National Lottery and English Heritage. the money was enough to save the building and undertake its restoration.

St Francis Xavier Church is on the east side of Broad Street, almost opposite the Hereford Museum and Art Gallery and just north of the Cathedral. The church is usually open daylight hours. If the main entrance is closed, check the side entrance (on the north side of the building). There is no dedicated parking but there are parking spaces along Broad Street and the church is within easy walking distance of city centre car parks. 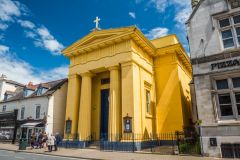 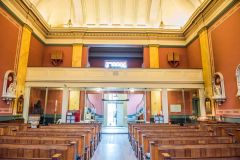 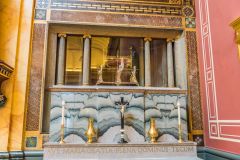 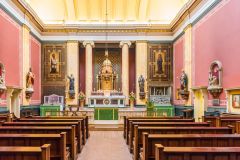 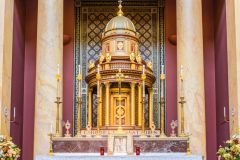