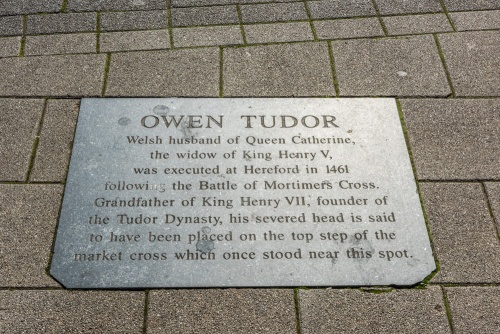 Set into the pavement of Hereford's High Town is a rectangular block of stone, marking the execution place of Owen Tudor (Owain ap Maredudd ap Tudur) the founder of the Tudor dynasty. Tudor was a Welsh nobleman whose uncles played a prominent role in Owain Glyndwr's revolt against the English. He fought at Agincourt in 1415, and through the patronage of Sir Walter Hungerford he was presented to the royal court.

Sometime after the death of Henry V in 1422 Tudor began an affair with his widowed queen, Catherine de Valois. The couple married secretly and had at least three children. Their eldest son was Edmund Tudor, the father of Henry VII. With his second son Jasper, he fought for the Lancastrian cause in the Wars of the Roses.

Owen Tudor was captured at the Battle of Mortimers Cross in 1460, where he led the army of his step-son, Henry VI. He was taken to Hereford, where he spent the night at the Green Dragon Hotel on Broad Street. The elegant Victorian hotel we see today stands on the same site.

On the morning of 4 February 1460 Tudor was led to the market place by Roger Vaughan, apparently unaware that he was about to be executed until he saw the chopping block and the executioner's axe.

When Tudor's red collar was removed to make the axe-stroke easier he is said to have remarked at the irony that 'the head that was won’t to lie on Queen Katherine’s lap' would now be cut off.

After the execution, Tudor's body was taken for burial to the Carmelite monastery of Greyfriars outside the city walls. The friary site is now a housing estate and no evidence of the friary can be found above ground.

Tudor's head, however, was put on the top step of Hereford's market cross (no longer standing). There, a 'mad woman' washed the blood away, combed his hair and beard, and lit 100 candles.

Remember Roger Vaughan, who led Owen Tudor to his execution? In 1471 he was captured and executed by Jasper Tudor, Owen's son and Henry VI's half-brother.

All the monarchs of England since Henry VII have been descended from Owen Tudor.

You can see the plaque set into the pavement near the western end of High Town. If there is a market going on you may find it hard to find the plaque amidst all the market stalls. The plaque reads:

Owen Tudor
Welsh husband of Queen Catherine,
the widow of King Henry V,
was executed at Hereford in 1461
following the Battle of Mortimer's Cross.
Grandfather of King Henry VII, founder of
the Tudor Dynasty, his severed head is said
to have been placed on the top step of the
market cross which once stood near this spot.

Look for the plaque at the western end of High Town. It is not signposted but should not prove difficult to spot. The plaque itself is not terribly striking but it is interesting to imagine the scene in 1461, with a crowd gathered to watch an execution where busy shoppers now scurry past.