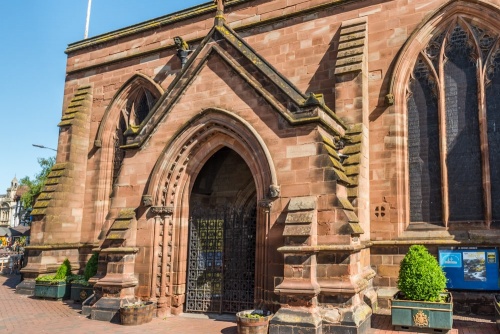 St Peter's is one of two medieval churches in Hereford (aside from the Cathedral) and acts as the city's official civic church. It is the largest and the oldest parish church in Herefordshire.

The church's early history is obscure, but it may have been established as a collegiate church around 1035. Another version of the church's history suggests that it was founded -- or re-founded -- by the Norman nobleman Walter de Lacy in 1080. De Lacy tragically died in a fall from the tower in 1085.

The completed church was given by Walter de Lacy's son Hugh to the monks of St Peter's Abbey in Gloucester (now Gloucester Cathedral). 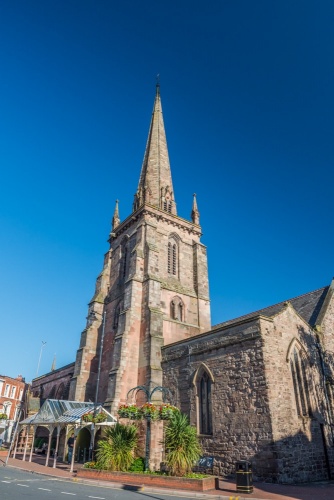 The church from St Peter's Square

The medieval church was heavily restored in 1888 under the direction of Thomas Nicholson, the diocesan architect. The restored church is built mainly of rubble and ashlar sandstone under a roof of Welsh slate.

It has a simple layout with a nave, chancel, south aisle, and west tower with a slender spire that acts as a local landmark. The spire belfry holds a 14th-century bell. This is probably the Common Bell used to warn of approaching danger -- like a medieval early-warning system to the citizens of Hereford.

Historical highlights include 15th-century choir stalls with carved misericords. The carved panels fronting the organ and the royal coat of arms to William III are by the famed woodcarver Grinling Gibbons. 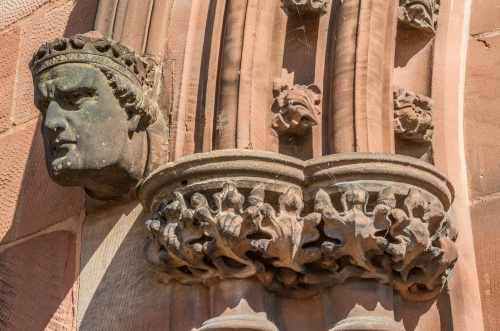 The interior has recently undergone a complete restoration, in which the old pews were removed and the interior opened up to create a multi-purpose space for community events.

Immediately opposite the church is Shire Hall, and occupying a traffic island between the church and hall is Hereford's striking war memorial.

The most famous vicar of St Peter's Church was John Venn, who together with his sister Emelia established the Hereford City Mission to care for the city's poor. The Venns built a corn mill, bought space to establish kitchen gardens so people could grow their own food, opened a public dispensary, built a model farm, a school, and a children's home, worked to improve sanitation, helped build a public library, and helped bring the YMCA to Hereford. The Venn's contribution to Hereford is unrivalled and is still felt today. 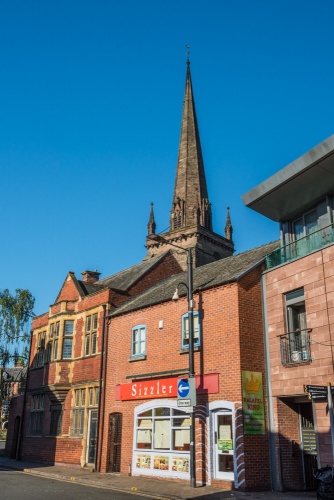 The church spire from Union Street

The church is opposite Shire Hall and the bus station on St Peter's square. It is easily reached on foot from the Cathedral and is just a stone's throw from the Black and White House Museum on High Town.