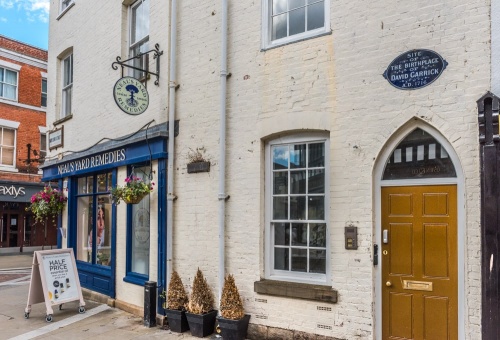 David Garrick was perhaps the first celebrity actor, celebrated for his stage performances in London's west end. He was also a theatre owner and promoter. The site of his birthplace lies just north of High Town in the heart of historic Hereford.

David Garrick was born at the Angel Inn in Hereford on 17 February 1717. He was christened at All Saints Church, a few blocks away, on 28 February. You can see a plaque on the chancel wall commemorating his ties to the church and to Hereford.

He spent his childhood in Lichfield with a brief stay in Lisbon with his uncle and another short stint at a school in Staffordshire when he was 19, where he studied under Samuel Johnson of dictionary fame. He married at 32 to Eva Maria Veigel and lived in London, not far from Drury Lane theatre. 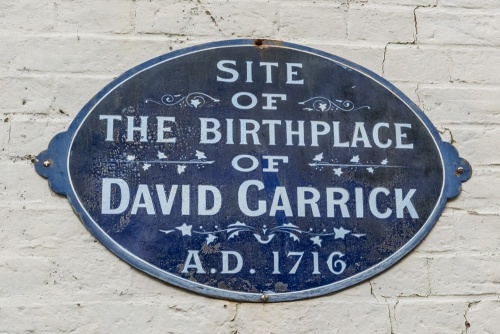 It may have been Johnson who first prompted Garrick to take the stage in 1740 in a performance of Henry Fielding's 'The Mock Doctor'. his career took off with startling speed; he became celebrated as an actor, and as a playwright. His fame may have been helped by the fact that he became part-owner of several newspapers, where his stage performances were lauded with praise.

He was also responsible for raising public awareness of Stratford-upon-Avon and its links to William Shakespeare. It was Garrick's promotion of a Jubilee to honour Shakespeare's birth that helped focus attention on Stratford, which until that time was a quiet market town. Garrick's efforts prompted a campaign to buy Shakespeare's birthplace for the nation.

For over 35 years Garrick was the most name in theatre, and his success as a performer, writer, and critic may never be equalled. He did more than any other single actor to raise the public's perception of acting as a profession. He died on 20 January 1779 and was buried in Poets Corner at Westminster Abbey.

As for his birthplace, the Angel Inn was pulled down sometime before 1823. All that remains is a plaque on the wall of Angel House. The plaque reads simply:

'Site of the Birthplace of David Garrick AD 1716' (the date is incorrect).

At the junction of Widemarsh Street and Maylord Street, just north of High Town.

More self catering near Garrick's Birthplace