HERITAGE HIGHLIGHTS:   The only medieval city gate in England retaining its barbican 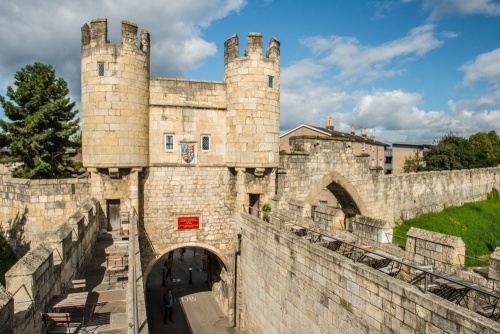 Though it does not get the number of tourists as Micklegate Bar or Monk Bar, Walmgate Bar is the most complete and well-preserved of York's medieval city gates. It is the only city gate to retain its barbican, portcullis, and inner doors and the only medieval city gate in England with an intact barbican.

Like both Micklegate Bar and Monk Bar, which both host museums, Walmgate Bar has found a new purpose; it is home to a very popular cafe, with tables inside the historic gatehouse and along the barbican walkways.

The oldest part of Walmgate is the stone arch at the rear (closest to the city centre) which dates to the 12th century. The barbican was built in the 14th century and the heavy oak doors followed in the 15th century. The final part of the building is a timber-framed Tudor extension on the inner wall. This was added during repairs to the Bar in 1584-1586 and probably replaced an earlier medieval structure. 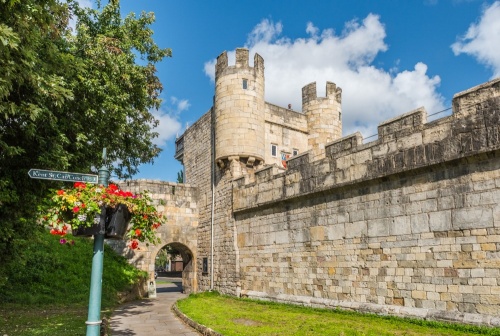 Walmgate Bar from the south

Walmgate long history was punctuated by two episodes of violence. In 1489 King Henry VII imposed new taxes to finance military aid for Brittany in his campaign against France. The king sent Henry Percy, the 4th Earl of Northumberland to collect the taxes in Yorkshire and Northumberland. The people of northern England saw no reason to defend Brittany, which was so far away to the south.

They rose in an abortive revolt known as the Yorkshire Rebellion. The rebels met with the Earl of Northumberland, but the meeting descended into violence and the Earl was killed. Henry responded by sending an army and the rebellion fizzled out. Walmgate Bar was set on fire during the revolt and badly damaged.

It was also heavily damaged by Parliamentary cannon in the 1644 Civil War Siege of York. Cannon from Lamel Hill and St Lawrence churchyard bombarded the Bar and Parliamentary soldiers mined the approach to the gateway. The mine tunnel was filled in in 1645. The Corporation of York couldn't afford to repair the Bar but Parliament granted £5,000 for the work in 1648. 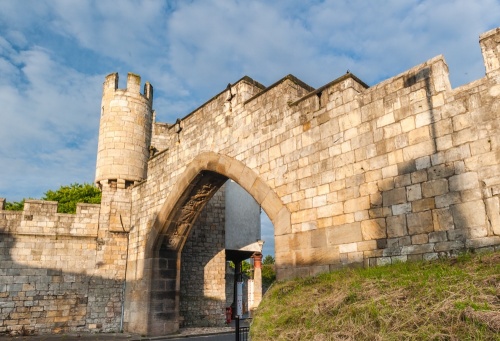 Walmgate Bar from the north

Over the next 200 years houses space within the city walls was at a premium and houses were thrown up against the barbican. The barbican and neighbouring walls were in a very poor state of repair and plans were mooted to pull down the barbican completely (this is what happened to the other medieval city gates). The Bar was fully restored in 1840 and the neighbouring houses were pulled down.

Look for a painted commemorative plaque installed following the restoration. It reads:

This Bar and Barbican
restored by the corporation
of York
A.D. 1840 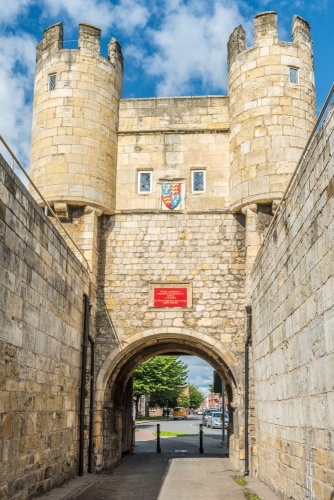 Inside the barbican passage

A painted and gilded city coat of arms is set over the central gatehouse passage. The coat of arms partially covers a worn 1684 datestone. There is a similar royal coat of arms over the inner face of the gateway passage.

Walmgate Bar consists of a three-storey gatehouse and a single-storey barbican stretching out to the east. The barbican creates a long, narrow passage which attackers would have been forced to cross before reaching the portcullis and heavy oak doors. The design was state of the art in the 14th century but it couldn't stand up to Parliamentary cannon in the Civil War Siege of York.

Walmgate Bar is now home to Gatehouse Coffee, a popular cafe that has been voted one of England's top coffee shops. Certainly, it is hard to beat the location! My wife and I took a break from exploring the city walls and had a hot cuppa at a table on the barbican parapet walk. What an amazing location to relax and soak in the atmosphere of history.

Walmgate Bar is at the junction of Walmgate and Barbican Road (the A1036) opposite the entrance to Lawrence Street. The gate is open at any time for pedestrians but access to the barbican walk depends on Gatehouse Coffee's opening hours. 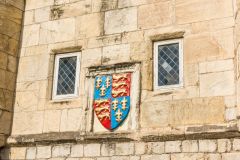 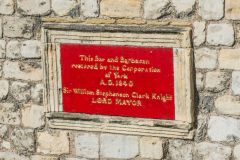 More self catering near Walmgate Bar