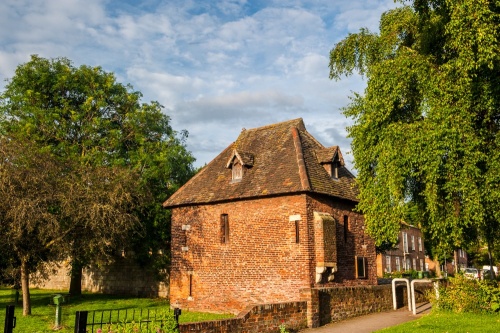 The Red Tower is the only brick-built tower on York's famous medieval city walls. The watchtower was built in 1490 to defend a vulnerable area of the wall that bordered on the King's Fishpool, a large manmade lake and marsh made by damming the River Foss.

The King's Fishpool stretched from the Red Tower to Layerthorpe Bridge some 700 yards to the north. It was begun in 1068 by William the Conqueror, who was building York Castle at the same time. By damming the river he forced the water level to rise and flow into the freshly-dug moat around the castle. aside from filling the moat, the flooded area created a large lake that effectively defended the eastern side of the city.

The king appointed Keepers to maintain the pool, which was stocked with pike and bream. Ordinary citizens were barred from fishing in the King's Fishpool. The only people allowed to row a boat on the lake were the wardens of Foss Bridge, the Keepers, and monks. 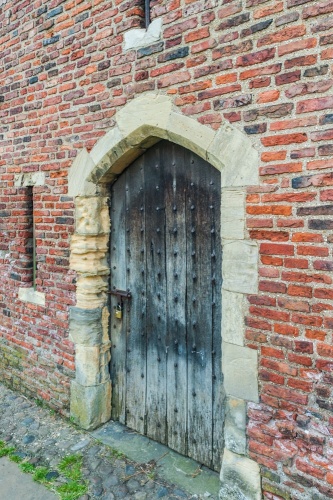 The Keeper had to watch out for people dumping rubbish in the pool. It was such a serious offence that transgressors in the Tudor period could be fined £100, a staggering sum at the time.

The Pool gradually silted up and by the 17th century it had created a large marsh with isolated islands. The area was called 'Foss Islands', a name that lives on in the neighbouring Foss Islands Road (the A1036).

The Red Tower was part of a major strengthening of the York defences begun by Richard III and completed under his successor Henry VII. Masonry walls were added in the 14th century to replace an earlier timber palisade.

At first glance, the Red Tower looks like a squat brick-built cottage. Looks can be deceiving, however; the base of the tower is buried under centuries of soil accumulation. The base is stone, which suggests that either stone was used where the tower was exposed to the waters of the King's Fishpool, or the upper section of brick was built atop an earlier stone foundation.

The top section of the tower had a flat lead roof and bristling battlements like Monk Bar.

The tower takes its name from the red brick used to build it. The bricks were probably made locally in brickworks that stood where James Street is today. 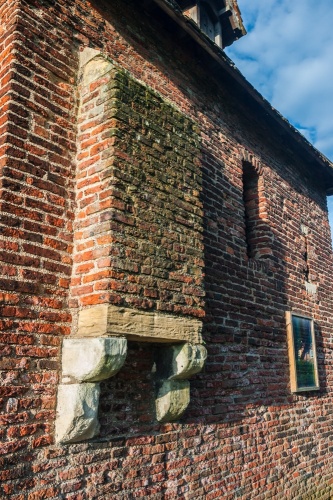 The City Corporation of York asked the Tilers' Guild to build the tower. The choice of building material prompted a conflict between the tilers and the stonemasons, who resented losing work that would ordinarily fall to them.

At that time there was no bricklayers guild and brickwork was performed by tilers. The Masons' Guild were unhappy at the choice since they had a de facto monopoly on all stonework in York.

The stonemasons took matters into there own hands, and tilers were soon complaining of having their tools stolen and destroyed.

The conflict took an ugly turn in 1491 when two masons were accused of murdering a tiler named John Patrick. One of the accused was William Hindley, the Master Mason at York Minster and a leading official in the Masons' Guild. Hindley was unfazed by his arrest and hired a man to walk through the streets shouting the news, so that anyone who had business with him would know where to find him.

Both men were acquitted of the murder, which says a lot about the high status of stonemasons in York and the relatively low status given to tilers. It is also worth noting that no other towers were built in stone. Perhaps the Masons had made their point.

The first written record of 'Red Tower' came in 1511 when it provided with artillery for defence. The tower was repaired in 1541 and again in 1545, but after that it seems to have had little strategic importance and was regularly leased out to tenants. 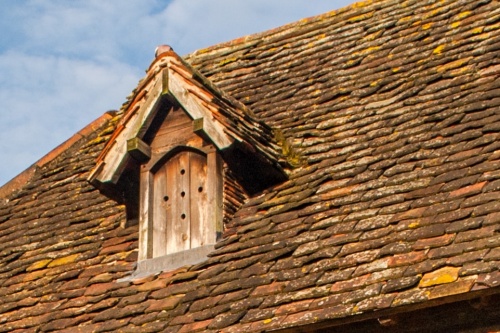 Red Tower was damaged during the Civil War siege of York in 1644. After the siege ended in favour of Parliament the eastern stretch of walls around the King's Fishpool were repaired. Work included enlarging the ditch in front of Red Tower.

In the 19th century the King's Fishpond was filled in and Foss Islands Road was built. This had the effect of raising the ground level and burying the stone base of the Red Tower. The present roof dates from this 19th-century work, though it incorporates some original material.

The Red Tower has been used for a variety of purposes over the years. It has been a cow-shed, a stable, and a place for making gunpowder. In that latter guise, it was known as Brimstone House.

The most interesting feature is a prominent garderobe projecting from the wall at first-floor height. The building's history is succinctly summed up by a plaque on the wall reading: 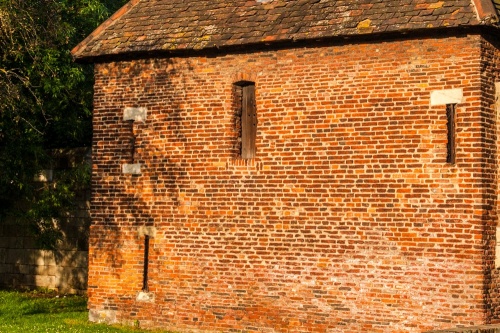 RED TOWER
This Tower marks the termination
of the City Wall, and at one time
marked the commencement of an
impassable swamp, which extended
to Layerthorpe Postern, the position
of which was near the existing
Layerthorpe Bridge; the Tower
suffered severely in the siege of 1644
and has undergone many restorations
since that period rendered necessary
by the nature of the ground on which
the foundations are laid. Formerly
the Tower was known as Brimstone
House after a manufactory carried
on within its walls.

The Red Tower entered a new phase of its history in 2015 when the Red Tower Project was launched. This volunteer initiative aims to transform the historic building into a community centre for learning and social activities.

Red Tower is set back from Foss Islands Road (the A1036) by Rosemary Place, just south of Navigation Road. There are no signposts, but there is a very useful information panel giving the history of the site.

More self catering near Red Tower