St Olave's was founded in the late Saxon period, sometime before 1055, by Siward, Earl of Northumberland. Olav (Olaf) died in 1030, and Siward's new church in York is the first in the world dedicated to the saint. It is possible that the church was part of a minster, or religious centre, with monks who went out into local communities.

The church was built beside a major road into York, probably just beside Siward's principal residence.

After the Norman Conquest, the church was granted to Alan of Brittany, who in turn gave it to Benedictine monks to establish a new abbey. The new abbey grew to become St Mary's, one of the great monasteries in northern England. The abbey grew, and the monks needed a larger church, so around 1089 they abandoned St Olave's in favour of a new church in what is now Museum Gardens.

The main entrance into the abbey was beside St Olave's church; indeed the abbey's entrance arch was built onto the west tower of the church. The church was later incorporated into a 13th-century defensive wall that encircled the abbey site. The church nave served local parishioners as their parish church. Despite the strong links between the abbey and church, the church entered into a long and bitter legal battle with the abbey. The city claimed that the abbey should keep up nave repairs, and the courts eventually declared that the church was indeed parochial, but the laity was responsible for upkeep. Following this decision, the church was rebuilt, with a tower and bells added. Thus, much of what we see today dates from the late 15th century.

The location of St Olave's on the abbey's encircling wall made it an important point in the Civil War siege of York in 1644. Tradition says that the church tower was used as a gun platform, but that claim does not appear in contemporary accounts, only in a later letter written by someone who seems to not know the geographic layout of York very well. 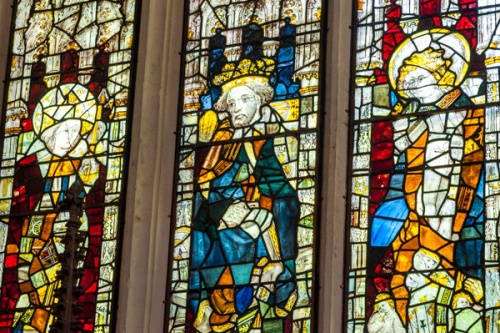 In 1721 the church was in decay, and had to be repaired using stone from the abbey ruins, which seems somewhat fitting given the links between church and abbey!

The interior is a mix of 15th and 18th-century work, with a large east window set with 15th century stained glass. Look for the figure of St Olave and a depiction of St Dunstan with tongs and a devil's nose. The piers have 18th-century bases and capitals. There is a royal coat of arms dated 1610-12.

St Olave's is a lovely church, and its location beside Museum Gardens make it one of the most easily visited historic churches in York. It is usually open daylight hours. 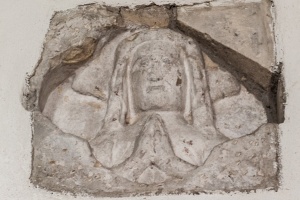 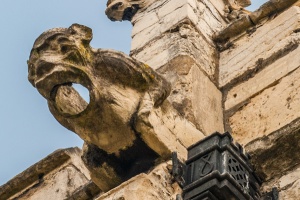 Gargoyle on the north wall 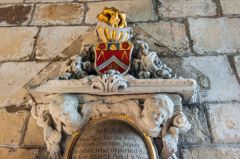