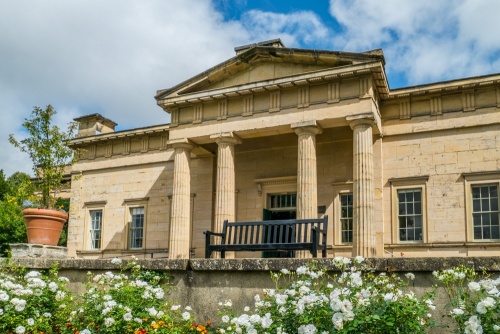 Museum Gardens is a public park stretching along the north bank of the River Ouse between Museum Street and Marygate. It takes its name from the Yorkshire Museum, which stands in the northern area of the gardens.

The Gardens were established in the 1830s by the Yorkshire Philosophical Society (YPS). At that time the word 'philosophical' did not have the same meaning it does today. It was roughly synonymous with 'scientific'. The YPS had the aim of promoting public understanding and appreciation of natural and social sciences.

Founding the gardens helped promote both natural science and an appreciation of antiquities, for the gardens encompassed an extraordinary wealth of historical artefacts from parts of the earliest Roman fort in York, a medieval hospital and monastery, and the medieval city walls. 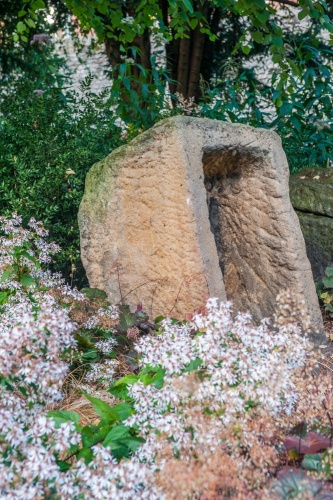 A medieval coffin from St Mary's Abbey
amid flower beds

It also provided space to build a museum covering the natural and social history of Yorkshire. The Yorkshire Museum opened to the public in 1830 and was one of the first purpose-built museums in Britain. The Museum Gardens were created for the YPS by Sir John Naysmith and included a pond, a conservatory, and a menagerie.

The Museum Gardens is known for its outstanding collection of plants and flowers. The Garden is a multi-award winner in the annual Yorkshire in Bloom competition. Features include an Oriental Border, Butterfly Border, and a Bulb Bank with thousands of vibrant daffodils in spring. The Rock Garden features alpine plants and dwarf conifers, while the Fern Garden is planted around carved stones from the abbey ruins.

A Prairie Border showcases plants once common on the North American prairie, while the Observatory Border features plants with star-shaped flowers - an appropriate them as the garden is laid out around one of the oldest working astronomical observatories in Britain. 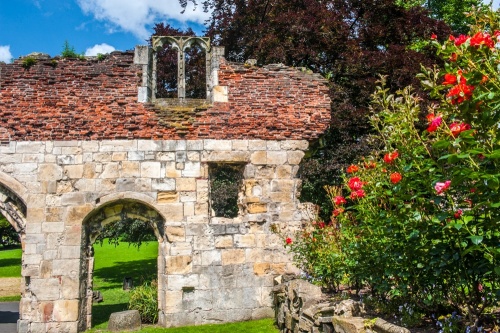 The museum that gives the garden its name opened in 1830 to hold the collections of the YPS. It is built on top of some of the medieval buildings of St Mary's Abbey. You can see the remains of these medieval foundations in the museum basement. The museum was designed in Greek Revival style by the architect William Wilkins. It is meant to remind viewers of a Greek temple since the museum is supposed to be a 'shrine to science'.

The museum has outstanding collections of Yorkshire geology, palaeontology, natural history, and archaeology. You can see carved stones and other objects from St Mary's Abbey. See Roman tombstones and mosaic floors found in York and a huge marble head from a Roman statue of Emperor Constantine which once stood inside the Roman fort of Eboracum.

One poignant exhibit showcases skeletons of those who died at the bloody Battle of Towton in 1461. They were buried in a mass grave on the site of Towton Hall. Even more moving is the skull of a young woman discovered in a well at Clifford's Tower. She is thought to have died in the tragic massacre of over 150 Jewish residents of York during mob violence in 1190. 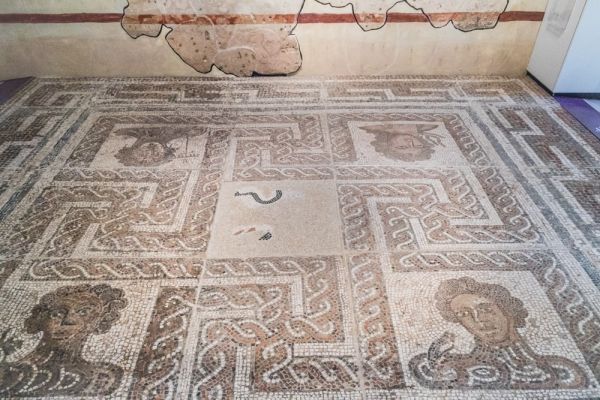 The gardens began as the grounds of St Mary's Abbey, the most important and powerful monastery in the north of England. The abbey was founded by William the Conqueror during his efforts to exert Norman control over the region after his successful bid for the English throne in 1066. The abbot of St Mary's was one of the most powerful ecclesiastical figures in medieval England, on a par with the archbishop of York.

The Abbey was suppressed by Henry VIII in his Dissolution of the Monasteries. All that remains of the Abbey buildings are the nave and crossing of the monastic church and the outline of the cloister. The abbey precinct is surrounded by high walls, most of which are still intact and make up the most complete set of monastic walls in the country.

The walls were necessary, for the monks of St Mary's and the townsfolk of York clashed repeatedly over the centuries. The gateway through the abbey walls on Marygate is known as St Mary's Lodge. It is now the headquarters of the York Museums Trust. 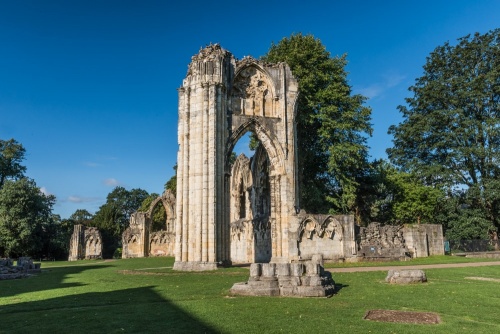 In the centre of the gardens is the Hospitium, an attractive building made of two timber-framed upper floors on a stone base. The name suggests that the building was used to house abbey guests. Next to the Hospitium is a stone archway that once led to a water gate on the River Ouse.

The ground floor of the Hospitium may have been used to store goods brought by water to a landing point by the water gate. The stone-built ground floor dates to the 14th century and the archway was built around 1500. The Hospitium was used by the Yorkshire Philosophical Society to store their collections until the Yorkshire Museum was complete. The building is now a popular function venue for weddings and private events. 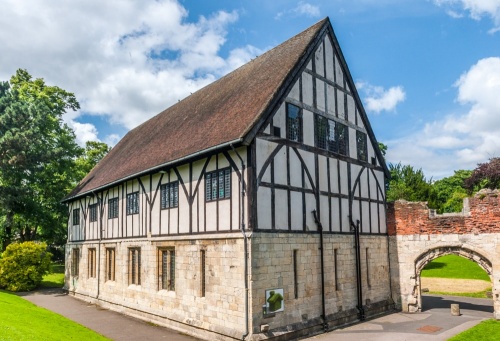 Bordering on Museum Street in the north-east corner of the Gardens is the ruin of a medieval hospital dedicated to St Leonard. The remains we see today include the hospital chapel, undercroft, and entrance passage. St Leonards was one of the oldest and largest hospitals in medieval England. As a religious organisation, it was forced to close by Henry VIII during his Dissolution of the Monasteries. 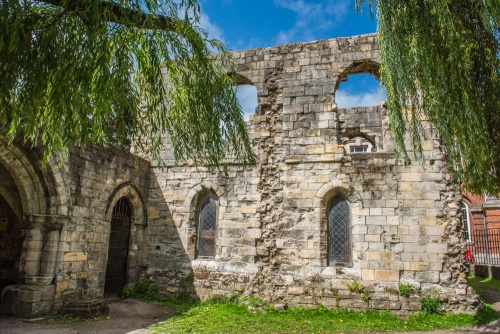 On the northern edge of Museum Gardens stands the Multangular Tower, a beautifully-preserved 4th-century Roman tower that was built to defend the fort of Eboracum. The tower stands roughly 30 feet high, with the bottom 20 feet Roman construction and the top 10 feet a medieval rebuilding featuring several arrow slits. Roman tiles are built into the tower wall. Inside the tower are several Roman stone coffins brought here from excavated sites around York. 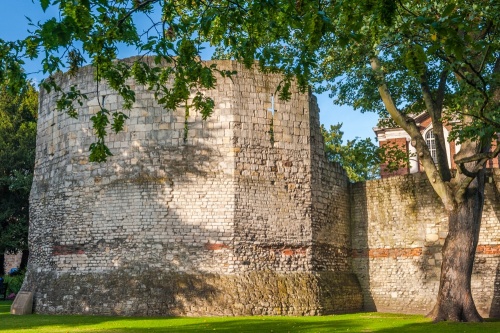 A stone's throw from the Multangular Tower is the Anglian Tower, a watchtower built onto the Roman walls after the departure of the Romans. This one of just two secular Anglo-Saxon structures in England. 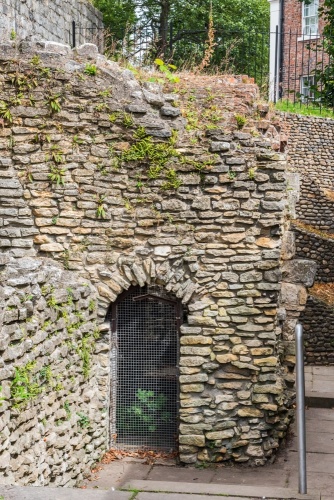 Within the Gardens stands the York Observatory, begun in 1832 and the oldest working observatory in Yorkshire. Highlights include a four-inch refractor telescope built by York native Thomas Cooke in 1850, but the real prize is an 1811 clock that keeps time by observing astronomical alignments. It was at one time the clock by which all others in York were set.

Immediately outside Museum Gardens on Marygate stands St Olave's Church, which can trace its foundation to at least AD 1055. It was founded by Earl Siward of York, whose stone coffin lid is in the Yorkshire Museum.

Museum Gardens can be accessed from Marygate through St Mary's Lodge, beside St Olave's Church, but most people will enter the Gardens off Museum Street, immediately north of the Lendal Bridge. If in doubt, just follow the pedestrian signs for the Yorkshire Museum.

Be aware that the Gardens gates are locked in the evenings!

More self catering near Museum Gardens