HERITAGE HIGHLIGHTS:   Former headuarters of the Council of the North 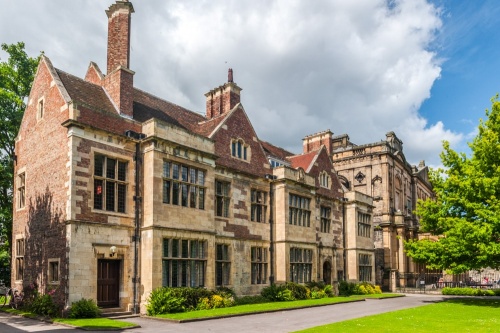 King's Manor is a lovely 15th-century building on Exhibition Square in York. It was built as a residence for the abbots of St Mary's Benedictine monastery, the wealthiest Benedictine house in northern England, and later served as the headquarters for the Council of the North. The Manor now houses the Archaeology department of York University.

St Mary's Abbey was founded in 1088 and rebuilt in 1271 just outside York's city walls. Sometime during the tenure of Simon de Warwick, Abbot of St Mary's from 1258-1296, an Abbot's House was built on the foundations of an earlier 11th-century building. This new residence was in the shape of an open courtyard with the opening on the north. You can still see evidence of the original 13th-century stonework in the lower sections of the current walls.

The upper storeys were built of timber but these were rebuilt in brick when the house was remodelled in the 15th century. Documents show that in 1483 Abbot Thomas Boothe hired a bricklayer named Richard Cheryholme and his four servants to construct the building. It was completed under Boothe's successor Abbot William Sever (1485-1502). 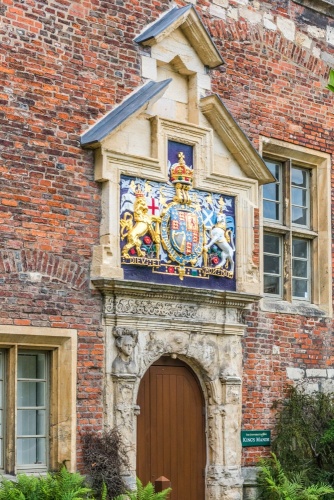 Charles I royal coat of arms

The Council of the North

St Mary's Abbey was suppressed by Henry VIII in 1539. You can see the extensive remains in Museum Gardens, immediately behind King's Manor. Though most of the monastery was destroyed, King's Manor survived and was used as the headquarters of the Council of the North. At this time the building was known as the Abbot's House.

The Council of the North was established by Edward IV in 1472 to administer northern England. It was originally based at Sheriff Hutton Castle and later at Sandal Castle.

The Council lost its importance under the Tudors but in 1537 Henry VIII resurrected it in the wake of the Catholic uprising known as the Pilgrimage of Grace. Not only did the Council meet here but the King's Manor acted as the official residence for the President of the Council. 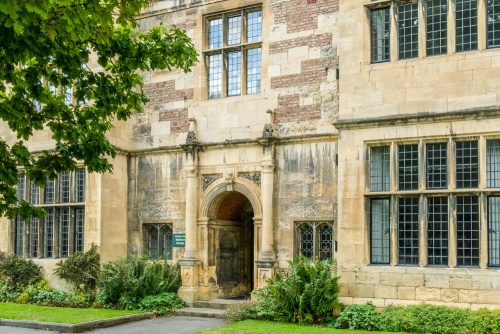 The former Centre for Medieval Studies

Henry VIII and Queen Catherine Howard made an ostentatious royal visit to York in 1541. In anticipation of the royal visit the city repaired and improved the King's Manor. The royal party stayed in the manor house fr 12 days. It was this visit that gives the building its popular name, 'King's Manor'.

The building was allowed to decay to the point where, in 1562, Henry Manners, the 2nd Earl of Rutland, Lord President of the Council of the North (1561-3), told Elizabeth I's Secretary of State William Cecil that 'it has been so defaced that only one large chamber remains'. Cecil must have acted on Manner's complaint, for the house was restored with new accommodation and an adjoining service building.

Construction did not go smoothly and building costs rose. Elizabeth I granted 100 oak trees from the Royal Forest of Galtres and the 3rd Earl of Sussex (President of the Council from 1568-72) requested 100 more.

The Earl of Sussex's successor was the Earl of Huntingdon, who added a Council Chamber on the first floor. He wasn't shy about promoting his own involvement, either; he installed an ornate plaster frieze incorporating his personal coat of arms. 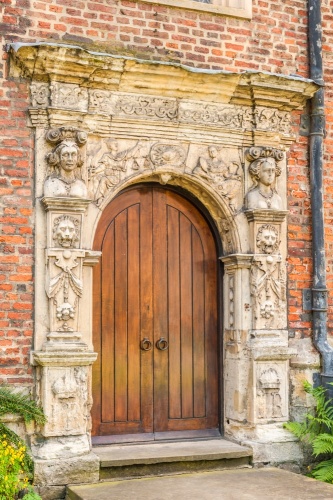 James I visited the King's Manor in 1603 and again in 1617. To prepare for the second visit the kitchen was remodelled, a new hall added, richly carved fireplaces inserted, and ornately decorated doorcases carved.

In 1628 a severe storm caused seven chimney stacks to collapse, killing the son of the Vice-President of the Council, Lord Osborne. Like his father, Charles I stayed twice at King's Manor, in 1633 and again in 1639. His connection to the building is made obvious by the ornate gilded and painted royal coat of arms over the entrance.

The Council of the North was dissolved in 1641 and the manor was badly damaged during the upheaval of the Civil War in 1644 when it served as the Royalist headquarters.

It was restored after the Civil War and turned into a residence for the Governor of the City of York. More upheaval followed in 1688 during the Glorious Revolution. When the Protestant prince William of Orange landed in England to claim the throne from the Catholic James II the Governor, Sir John Revesby, remained loyal to James. A band of armed Protestants under Thomas Osborne, Earl of Danby, forced the defenders of York to surrender and captured the King's Manor on William's behalf.

From the late 17th century the house was leased to a succession of private tenants, none of whom had any incentive to maintain the building. As a result, it was declared 'ruinous' in 1690. The house was subdivided and one part served as a boarding school. 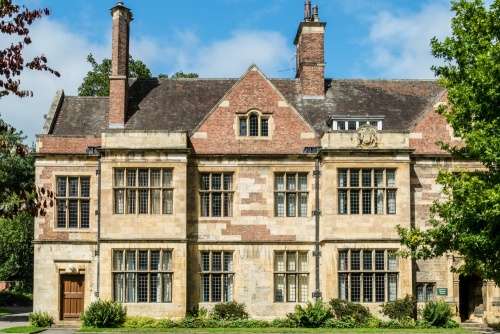 Another view of the north front

The High Sheriffs of Yorkshire began to use the chapel as a banqueting hall for entertaining guests during the assizes and race meetings. From 1710 assemblies were held in the hall. These stopped in 1732 when the York Assembly Rooms were built nearby.

The former Council Chamber used by the Council of the North now houses the refectory cafe. 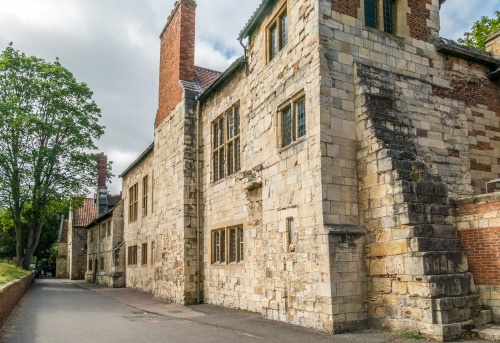 King's Manor occupies the south side of Exhibition Square, near Bootham Bar and a stone's throw from the York Art Gallery. There is a pay display parking area on Marygate, a short stroll away.

Visitors are welcome to enjoy the Refectory Cafe, but the building interior is usually closed to visitors as it is in constant use by students and staff.