HERITAGE HIGHLIGHTS:   The most visited of Cornwall's ancient holy wells 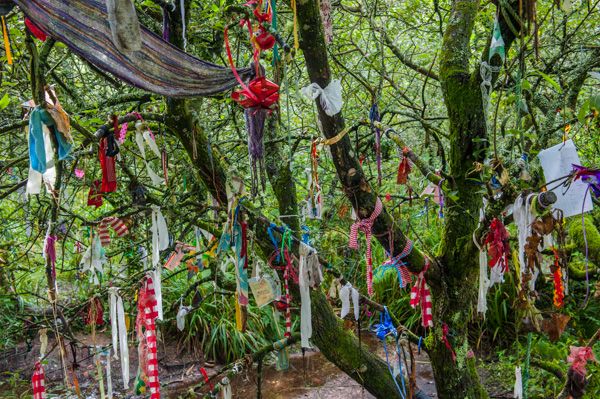 The Madron cloutie tree, over the holy well

Just west of Madron village a muddy trail leads through thickets to an ancient holy well which has been drawing visitors for thousands of years. Many come for the reputed healing powers of the water which bubbles up from an underground spring. Near the well is a ruined 12th-century chapel and baptistry, fed by the same water supply.

There are actually two wells, and it is easy to confuse them. The first is a wishing well, reached after a walk of 5 minutes or so. The first indication you have that you've arrived at the wishing well is a tree absolutely festooned with small, colourful strips of cloth, glittering bangles, and more peculiar objects like small child's toys. The tree's spreading branches shade a shallow circular pool, with an underground spring emerging at one end.

The custom of tying strips of cloth to the tree goes back deep into the pagan period, and is followed in several parts of the country. For example, a similar custom is followed at West Kennet, Wiltshire.

The idea is that if you are ill, you tie a piece of organic material to the tree, and bathe in, or drink, the sacred waters of the well. As the cloth slowly disintegrates over time, so too the illness or disability will pass.

I rather suspect that a great many people who leave behind pieces of cloth today are not necessarily praying for healing, but simply enjoying the ceremonial observance. This type of tree is often called a 'cloutie' tree, and the rags are 'clouties'. 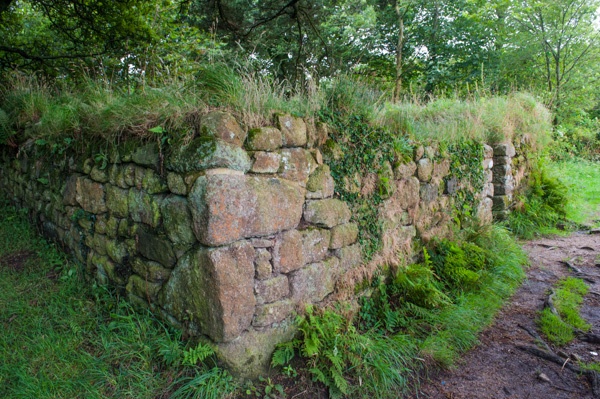 Beside the wishing well the trail divides. One path leads right to the chapel, the other goes off at an angle to the well. The 'trail' to the well - and I use the word advisedly - can be extremely wet and boggy, even during dry periods, so good rubber boots are a necessity.

However, access to the chapel is easy. From the wishing well the trail continues north through woodland, following the boundary of a farm field. After 75 yards you come to a small, overgrown glade containing a rectangular building, covered in moss and roofless to the sky.

The walls are about chest high, and there is one opening. Inside, to your left is a small raised dais with a stone altar, looking like a bench. At the opposite corner is a baptistry, or well-head, with steps going down into a dim enclosure, where water burbles up from the same underground source that feeds the nearby holy well.

The chapel measures roughly 24 feet long by 16 feet wide, with granite benches down the sides. The chapel dates to the 12th century, but almost certainly stands on a much, much earlier site of pagan observance.

The well, and the nearby village, is named for St Madron, a hermit in Brittany but of Cornish descent. Madron, or Maddern, was the patron saint of Cures and Protection against pain. His date of birth is uncertain, but tradition suggests that he died around AD 540. 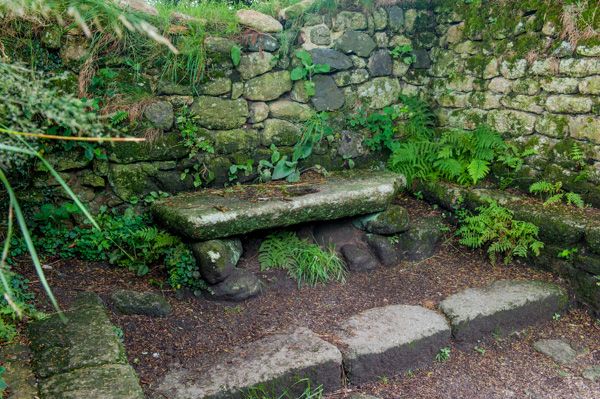 From the cloutie tree by the wishing well the trail branches off, and meanders indistinctly for about 1/2 mile, crossing a field to the original holy well, which is not marked and hard to spot until you are right on top of it. This is a circular pool, lined with stones, with a nearby green mound. The mound was called St Maddern's bed, and pilgrims used to sleep on it as part of a healing ritual.

Numerous stories of healing are associated with the well and chapel. The most famous of these stories concerns a 12th-century man named John Trelille, who had been paralysed from the waist down for 16 years. He bathed three times in the well, and each time spent the night on St Maddern's Bed.

At the end of his 'treatment' he was cured of his paralysis and was able to gain work as a labourer. Trelille's cure was verified by the Bishop of Exeter after an enquiry, and the publicity helped keep pilgrim's coming to Madron throughout the medieval period.

Another tradition at Madron is a little less dramatic than curing paralysis. Unmarried females would tie pieces of straw together in the shape of a cross, and lay the cross on the surface of the water. The number of bubbles that rose to the surface was said to indicate the number of years until they would be married.

I've visited Madron twice, and both times I found the sort of place I wanted to linger, to simply sit and soak up the atmosphere. There are some place that simply have a certain 'something' about them, and Madron has it in spades. 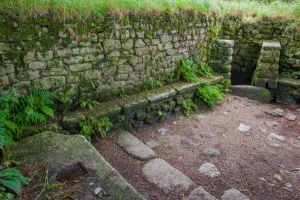 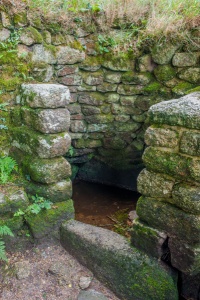 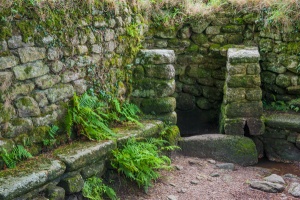 The baptistry and granite bench