Zennor Church and the Mermaid of Zennor 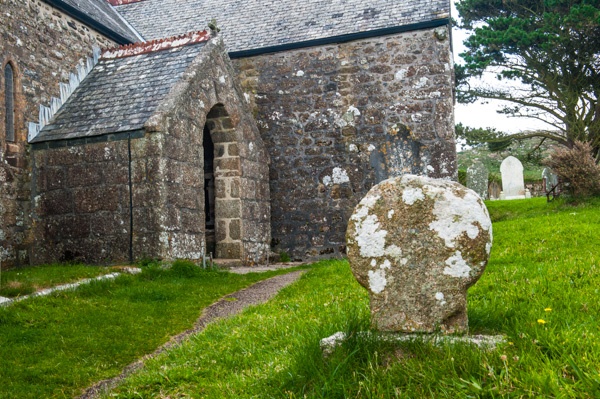 The church of St Senara in the small Cornish village of Zennor is one of the historic delights of the St Ives area. The present church dates to the 12th century, but it is thought to stand on the site of a cell founded by the 6th century saint, Senara, whose name has been altered over the centuries to become 'Zennor'.

Senara may have been a Breton princess named Asenora, a devout Christian, who was married to a king named Goello. When Senara became pregnant, the king's mother falsely accused her of infidelity, and the king cast her into the sea.

According to the tale, she was put in a barrel, which was then nailed shut and allowed to drift on the waves. The barrel drifted to Ireland, and she was rescued by an angel. After her son, Budoc, had grown, they both set out to convert the natives to Christianity.

Alternative versions of the story say that she was washed up at Zennor, where she founded a church, before continuing on to Ireland, or that she came ashore in Ireland, and only later visited Cornwall and founded a church here. In either event, her husband heard of her good work and invited her to return to Brittany as his queen, and named her son as his heir. 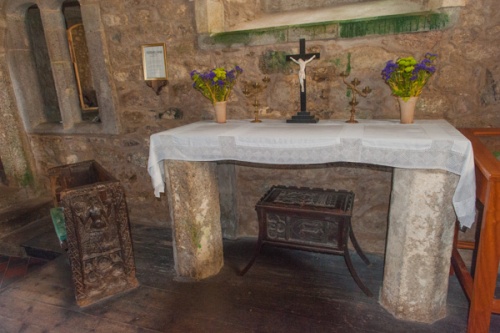 Alternatively, the church may have been founded by Irish or Breton missionaries and simply dedicated to Senara. The churchyard follows the oval outline of an Iron Age enclosure, which itself is built atop earlier Stone Age and Bronze Age field boundaries.

Most people come to Zennor church to see the 'mermaid chair', so let's cover that first. 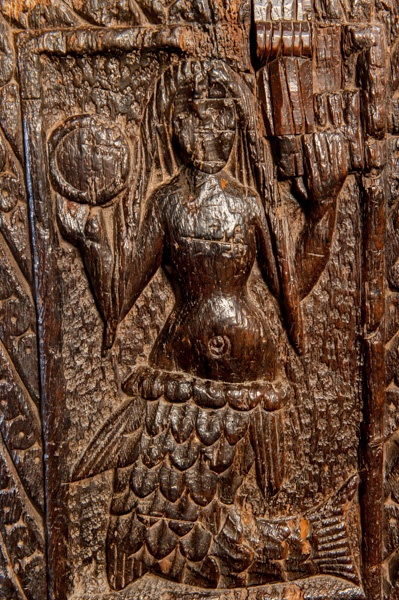 The Mermaid Carving
Zennor church is famous for a carved medieval chair, or bench end, displayed in the south side chapel. The carving is generally dated to between 1400-1500. The carving shows a mermaid carrying a comb and mirror. The pose is similar to classical depictions of the goddess of love and of the sea, Aphrodite. In the classical tradition, Aphrodite carries a quince (sometimes called a love apple).

In later images, the quince has become a mirror, a symbol of heartlessness and vanity, which rather twists the original meaning. In the medieval period, it was a common Cornish custom to perform 'miracle plays', in which the mermaid was used to represent the dual nature of Christ; just as the mermaid was both fish and human, Christ was both God and man.

You can still see medieval wall paintings of mermaids in other Cornish churches, such as Altarnun and Breage, but only at Zennor is there a surviving mermaid carving.

Why here? Well, St Senara, who founded the first church at Zennor over 1400 years ago, came here by sea, so the mermaid seems an appropriate symbol. Also, there is a local legend linking Zennor to mermaids.

A local squire's son named Matthew Trewhella was a member of the church choir and was known for his pure singing voice. A mermaid named Morveren, hearing his song, came into the church to listen. She was smitten by Matthew and lured the chorister into the sea at nearby Pendour Cove.

You can guess the next bit; he never returned, and on warm summer evenings it is said that their voices can be heard joined in song, emanating from beneath the waves.

Now, did the legend inspire the mermaid chair carving, or did the carving give rise to the legend?

Also in the side chapel is a small stone carving leaning against the wall. This is very worn, but you can see that it depicts a saint. The church guide simply describes it as 'ancient', but I'd say it is at least Norman, and probably a lot earlier. The stone altar slab is certainly Norman. Above the altar is a window with stained glass depicting naval scenes, commemorating Admiral Borlase, who is buried in the churchyard. 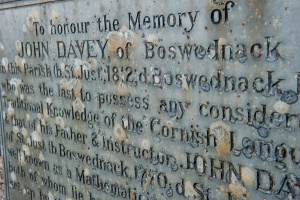 To the left of the south porch is a plaque to John Davey (d. 1891) said to be the last person to have a real working knowledge of the Cornish language. Natives of Mousehole, on the south coast, may like to point out that Dolly Pentreath (d. 1777), who is buried at Paul church just outside Mousehole, was the last person to speak Cornish as her native language, but let's not split hairs!

There are a wonderful collection of monuments under the tower. One is to John Quick (d. 1784), with an inscription that says he 'excell'd his equals', a rather neat trick! Another memorial is to a 'hen-pecked husband'.

In the south-west corner of the church is a worn Norman font. This was found buried in the vicarage garden and was restored to the church in 1960. Close to the south door is the current font, dating to the late 13th or early 14th century. This has an octagonal bowl, decorated with quatrefoils, supported on four slender columns and a strong central pillar.

In the north wall is the Burma Star window, dedicated to armed forces who served in Burma during WWII. Hanging from the roof near the window is a model of a West Country schooner, created as a memorial to WA Proctor, who died on a solitary round-the-world voyage, and also to all unnamed sailors who were shipwrecked along this stretch of the Cornish coast.

In the churchyard are a pair of Celtic crosses and a cross head on a rough plinth. On the south wall is a sundial dated to 1737 decorated with crossed bones, (for death), and an angel head and wings (for immortality).

NOTE: Zennor is very popular in summer. Free parking along the one-way village access road is very limited; you might get lucky and find a space, or you might not! There is, however, a paid parking lot beside the pub and museum, about 30 seconds stroll from the church!

More self catering near Zennor

More bed and breakfasts near Zennor