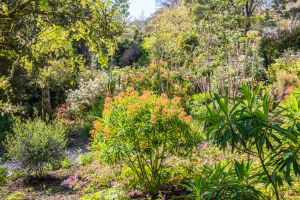 Tregwainton is a sheltered garden on the outskirts of Madron, featuring a surprising variety of exotic plants and shrubs, including giant tree ferns. A viewing platform lets visitors take in the walled gardens, built to the dimensions of Noah's Ark. A terrace with summer house gives wonderful views across Mount's Bay.

The first record of a house at Tregwainton comes from the 16th century. The oldest part of the gardens also date to the Elizabethan period, when the walled gardens were designed. The walls were built, not for style, but to keep cool air from escaping at night, making the gardens more suitable for tender plant varieties such as fruit trees.

The Elizabethan house was extended and rebuilt in the 18th and 19th centuries. In 1814 the estate was purchased by Sir Rose Price, whose father made the family fortune as the owner of a sugar plantation in Jamaica.

Rose Price laid out most of the gardens we see today, including the new west-facing walled gardens, in the exact dimensions of Noah's Ark according to the Bible. The gardens are bordered by brick, rather than local stone. Though brick is more expensive, it holds heat better, and as a result, Tregwainton's walled garden is virtually frost-free. This enabled vegetables to be planted earlier in the year and means the gardens can support tender varieties of plants not viable under normal conditions. 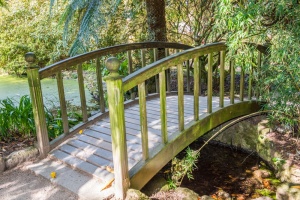 A picturesque footbridge crosses a stream

The Price family's Jamaica plantation, like so many others, used slave labour, but the 1833 Emancipation Act spelled the end of slavery in the British Empire and the Price family slowly lost their income. They were forced to sell Trengwainton to the Bolitho family, who still own the property.

From 1925 Sir Edward Bolitho sponsored a plant-hunting expedition to Burma and Assam. The results of the expedition meant Trengwainton was the first place in Britain to grow some varieties of Eastern plants. One of the major successes of that seed-hunting trip was sweet-smelling rhododendrons that come into bloom in late Spring.

The gardens were opened to the public in 1931 and thirty years later Sir Edward Bolitho gave 98 acres of park and gardens to the National Trust. Twenty five of those acres are open to the public.

The south-facing garden has a uniquely warm micro-climate, meaning that half-hardy and tender trees, shrubs, and other plants thrive here even when they cannot survive in the open anywhere else in Britain. There is a stream and bog garden laid out along the meandering course of a quiet stream, offering a home to bamboo, lilies, primulas, and gigantic Australian tree ferns.

The original vegetable gardens have been converted into 5 separate garden areas, holding plants from around the world. See separate 'mini-gardens with plants from Chile, Japan, China, the Canary Islands, and New Zealand. One highlight is a Magnolia cylindrica, native to China, with small, scented flowers from April. Perhaps even more impressive is the Magnolia campbellii, planted in 1926, who produces masses of rose pink flowers from February.

Our family had a wonderful time exploring Trengwainton. We came late on a sunny day in April, when spring flowers were in full bloom, colour was everywhere, and the scent of flowers filled the air. The walled garden was lush even by Cornwall standards. We really enjoyed relaxing on a handy bench near the mansion house (off-limits to visitors) and looking out over Mounts Bay and Penzance. Trengwainton deserves to be better-known. 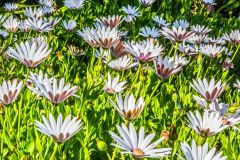 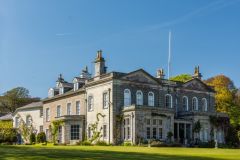 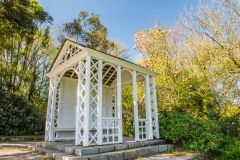 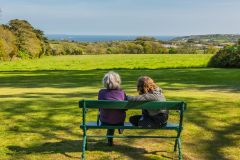 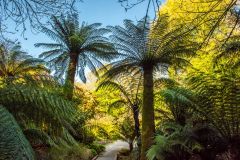 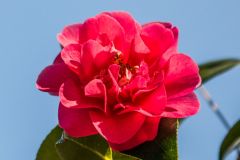 More self catering near Trengwainton Garden >>