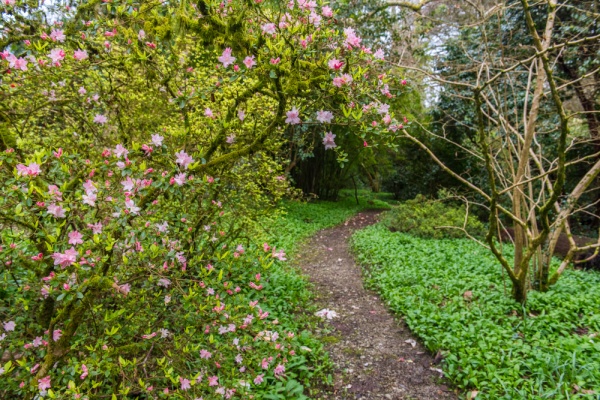 The Upper Garden at Penjerrick

Penjerrick is one of Cornwall's best-kept secrets and one of the most intriguing historic gardens in England. The origins of the 15-acre gardens go back to the 18th century when the Penjerick estate was purchased by the Fox family to serve as a summer residence. At that time there were several small cottages but no actual house.

The Fox family had a tradition as avid gardeners, and were responsible for two other famous gardens in south Cornwall; Glendurgan, laid out by Alfred Fox, and Trebah, designed by his brother Charles.

Charles and Alfred Fox had another brother, Robert Were Fox (1789-1877), a keen geologist, mining expert, and philosopher with an interest in gardening. RW Fox carried out numerous experiments on acclimatising foreign plant species to new environments.

Fox began to lay out the estate and encourage new species of plants. His son Barclay Fox enlarged the cottages to form a house and developed the surrounding gardens further. The 19th-century house fell into decay in the early 20th century and had to be pulled down. 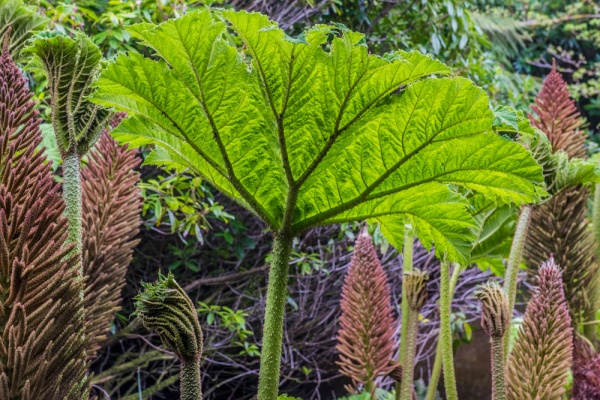 Gunnera in the Valley Garden

Barclay Fox's sister Caroline was a notable diarist. Unfortunately a disastrous fire destroyed all but one volume of her writing. That single volume was published after her death to great acclaim.

In 1935 the attractive present house was built by Waldo and Janet Fox. Janet Fox later left Penjerrick to the National Trust, but the bequest was turned down as the Trust considered the endowment inadequate.

In front of the house a terrace walk leads past the site of a former fernery and grotto.

With the aide of the estate's head gardener Mr Smith, Barclay Fox created a haven for sub-tropical shrubs and trees. Among these are examples of early hybrid rhododendrons. One variety successfully hybridized here is 'Penjerrick Cream'.

Other highlights include gigantic tree ferns (Dicksonia antarctica) stretching up to 5 metres high. Look for copses of bamboo, lush azaleas, camellias, gunnera, and numerous tall trees. The garden is home to Barclayi and Penjerrick hybrid rhododendrons. 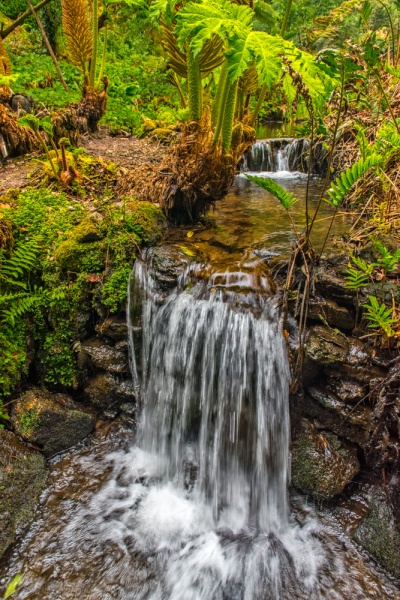 A waterfall in the Valley Garden

There are two parts to the garden. The upper garden, near the house, and the Valley Garden, beyond the minor road to Mawnan Smith and reached by a footbridge over the road. The upper garden has fabulous old trees, including a Ginkgo Biloba and a Paulownia. Trails wind amid overgrown glades where wild garlic and bluebells abound. At the bottom of the lawn is a giant Sequoia, or California Redwood.

When you come to the bottom of the upper garden you will see a footbridge over the public road. Beside the footbridge stairs is a round brain coral brought to Penjerrck by Captain Fitzroy of the HMS Beagle, the ship that took Charles Darwin on his famous voyage of discovery to the Galapagos Islands. The Valley Garden is laid out around four ponds linked by a small stream.

This area is truly a jungle garden, with lush, luxuriant undergrowth, giant tree ferns, hydrangea, and clumps of bamboo. You catch glimpses of a small waterfall, and the trail leads to a huge old beech tree on the upper slope of the valley. 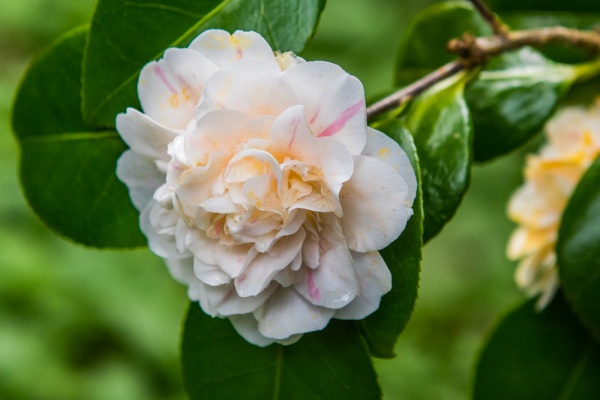 A spring blossom in the Upper Garden

The garden is open seasonally, on specified days between spring and the end of September. You can also contact the gardens for possible openings outside these times. Check the official website for current days.

If you come by car be aware that there is no designated parking area but you are free to park along the grass verge of the main drive to the house. There is a small gate into the garden to the left of the drive.

When we visited there was an honesty box just inside the garden entrance, where you can get laminated garden guides with a very handy map of the site. The admission fee was quite reasonable when we visited. Please be aware that this is a wild garden, with areas that can get very muddy after wet weather. I highly recommend rubber boots, or at the very least good waterproof footwear.

The garden is at its best in spring, from March-May. If you are used to very formal gardens then Penjerrick will be a real eye-opener. Exploring the gardens is like entering the world of a jungle explorer. 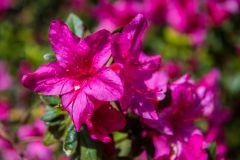 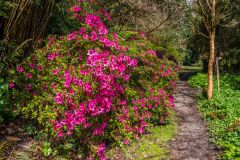 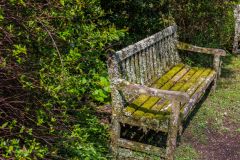 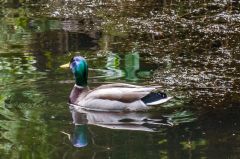 More self catering near Penjerrick Gardens

Self Catering near Falmouth