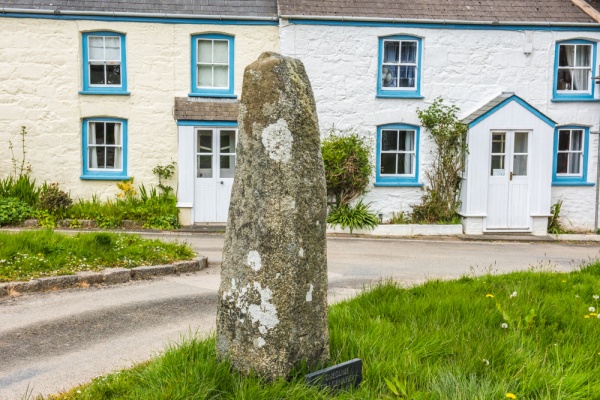 The little village of Mawgan-in-Meneage (not to be confused with the village of St Mawgan-in-Pydar near Newquay) lies in a beautiful rural setting near Helston, accessed by winding lanes. On the triangular village green stands an ancient inscribed stone, often referred to as a cross.

The Mawgan Cross stands roughly seven feet tall, and is carved from granite. The location is atop an ancient boundary. The stone is incised with a worn Latin inscription, no longer legible, reading 'CNEGUMI FILI GENAIUS'. This translates loosely as '[the stone] of Cnegumus, son of Genaius'. Since the inscription is too worn to be clearly seen modern historians have had to rely on an old photograph and drawing of the stone.

It is very difficult to date the stone with any precision, but the style of lettering has led historians to suggest that it was carved sometime between the 6th-10th centuries. Above the inscription are three stylised letters arranged vertically. The top and bottom letters are the Greek 'Alpha' and 'Omega' respectively, often used to represent Christ. Between them is the letter 'M', perhaps for 'Maria' (Mary).

The upper section on the pillar has been prepared to act as a mortice for a cross-head, now missing. It is entirely possible that there was never a cross-head, as many early Christian memorial stones were simple pillars without a cross-head. The mortice suggests that the memorial stone was later adapted for use as a wayside cross.

At the base of the Cross is a modern stone recording the Latin inscription and the words 'What Lieth Here Is Not The Soul'.

The Cross is not signposted, nor is there any obvious information on the site to help interpret the monument. There's not really any good place to park, though we did manage to pull to the side of the road long enough for me to scramble about and take photos of the stone. Having said that it is very easy to find the Cross; it is on the small green just west of the parish church and is impossible to miss if you keep your eyes open. 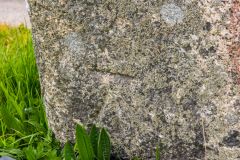 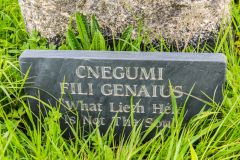 More self catering near Mawgan Cross