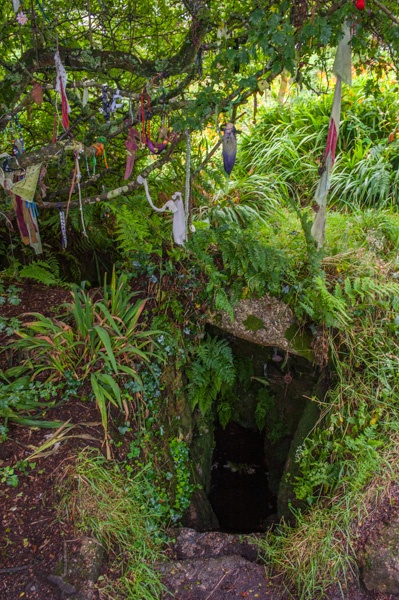 Sancreed is a scattered village on high ground in the beautiful Penwith area west of Penzance. The village is named for an early Celtic saint naned Creden, or Credan, who probably founded a religious community near here. Certainly the circular shape of the churchyard and the presence of 5 Celtic crosses suggest a religious settlement.

Creden was a follower of St Petroc, and became a swineherd in repentance for accidentally killing his father.

Opposite the churchyard, beside the village phone box, a signed trail leads west for several hundred yards before a branching path leads off to the right. After only 400 yards or so you reach a small set of worn stone steps leading down into a shallow pool, protected by stone slabs in the form of a wellhead. 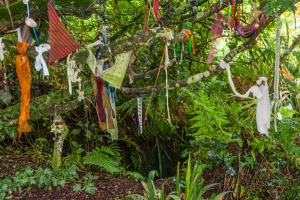 This is Sancreed Holy Well, certainly one of the easiest holy sites to reach in this area of western Cornwall. The well chamber is supported by corbelled walls and a stone slab roof. The steps are worn and slippery, but you can descend if you are careful, or simply lie down and reach a hand into the water if you fancy a drink. I wouldn't recommend it, for several people have reported high levels of radon gas at the well!

A short distance above the well itself is a small, ruined chapel, or baptistry. The chapel is probably medieval, made of granite, with a doorway in the south side of a rectangular layout. The walls are of rubble, and stand at most 1 metre high. It is smaller than the chapel at Madron, but similar in design. (I don't have a photo of the Sancreed chapel, so if you want to get an idea of what it looks like, check the photos in my Madron article).

We don't know when the well was established (English Heritage hedge their bets by saying simply that is 'possibly medieval'). We'd be on fairly safe ground saying it has been in use since at least the Celtic period, that is, from the 6th-7th century.

Traditions die hard in this part of the world, and so it is at Sancreed; a small tree beside the well is decorated with hundreds of 'clouties', or small strips of coloured cloth. The tradition dates back to pagan times, and says that if an ill person hangs a cloutie at a holy well, and either bathes in the water or drinks it, then as the cloutie disintegrates the illness will pass. 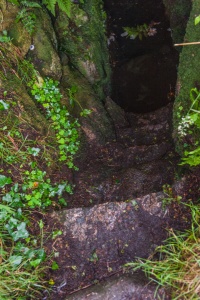 Steps leading down
into the well 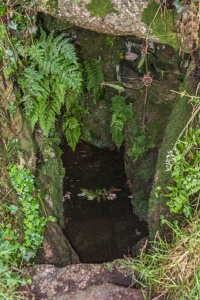 Looking inside the
well chamber

About Sancreed Holy Well
Address: Sancreed, Cornwall, England
Attraction Type: Prehistoric Site
Location: On a signed footpath from the centre of Sancreed, by a phone box opposite the church. Easily reached in five minutes, but the path can be muddy.
Location map
OS: SW418292
Photo Credit: David Ross and Britain Express