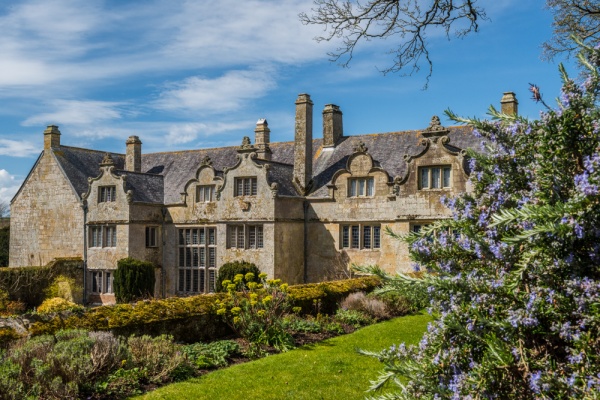 Trerice is a delightful Elizabethan manor house, with ornate Dutch-style gables. The most famous feature of Trerice is its barrel-roofed great chamber. A traditional garden and apple orchard featuring old varieties of trees surround the manor.

The story of Trerice is the story of the Arundell family. Sir John Arundell IV made a fortune in the service of Henry VIII. He was knighted at the Battle of the Spurs in 1513, and later served as the king's Esquire of the Body before serving under Edward VI and Mary I. His son, John Arundell V, began to build a new house at Trerice to replace an older medieval house. Financing his new project was made easier by an advantageous marriage to Katherine Hill in 1562. 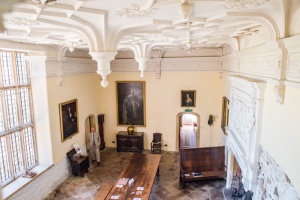 Looking down on the Great Hall

Sir John's heir, John VI, fought for Charles I in the Civil War and was in charge of defending Pendennis Castle for the crown. His support for the royalist cause earned him the nickname 'John for the King'.

Arundell's royalist support caused great hardship for the family during Cromwell's Commonwealth when the family's estates were seized. On the Restoration of the Monarchy in 1660 the estates were duly restored and Richard, John VI's son and heir, was granted the title of Baron Arundell.

In 1675 the 2nd Baron Arundell married Margaret Acland of Killerton, in Devon, a connection that would have far-reaching consequences. By the 18th century the family had begun to spend less time at Trerice, and as a result, the house was altered very little, leaving us with a wonderful time-capsule, unchanged by the tides of fashion.

In 1768 the last of the direct Arundell line died without an heir, and the house passed to the Acland family. The Acland's restored the Great Chamber, with its ornate barrel-vaulted ceiling. The chamber is lit by a huge east window divided by mullions into 576 individual panes of glass.

The rest of the house was let to farming tenants. In the early 20th century the Acland's sold the estate, which was then divided into 12 separate farms. The last tenants were the Elton family, who negotiated a 200-year lease with the National Trust in 1953 on condition that the Eltons restore the house. John Elton expected to pay 20,000 GBP to restore the house but the final cost was 3 times that amount!

The result is a wonderful display of original Tudor interiors, with superb plasterwork ceilings. Outside the house are terraced walks, a recreated Tudor knot garden, and colourful borders. 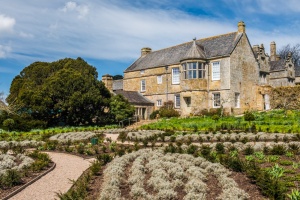 There is a sad tale attached to the house; according to the story, one of the Arundell lords (it is not clear which one) seduced a servant girl. When the girl became pregnant the lord abandoned her. The girl committed suicide, and ever since, her ghost haunts the house.

In this case, however, no one has ever claimed to actually see a ghostly presence; rather, visitors tell of a sudden chill in the air, a rustle of skirts, and the scent of lilac. The aura seems strongest in the library, with some visitors refusing to enter the room.

We came to Trerice on a sunny afternoon in April. We were quite prepared to wander about on our own, but the National Trust volunteer at the ticket kiosk told us there was a short talk about to start if we wanted to hear it. We opted to hear the talk and I was very glad we did. The guide was extremely informative and gave us an overview of the Arundell family and how the house came to be built. He really helped make the history of the family come alive, and that helped us get quite a bit more out of our visit than we otherwise might have.

After the short talk, we were free to wander. We took in the upper garden area and the Parade Ground where the Home Guard practised during WWII. Below the house is The Mohay, where the National Trust has recreated a Tudor turf maze. The maze at Trerice is based on a design by Elizabethan gardener Thomas Hill, author of The Gardener's Labyrinth, published in the 1570s and regarded as England's first gardening manual. Sadly, when we visited the maze had been allowed to grow shaggy, which is a shame as it would have been interesting to see it as a Tudor visitor might have done.

Finally, we explored the house. By far the most interesting chamber is the great hall, decorated with a superb, ornately plastered ceiling. The highlight of the Great Hall is not the ceiling, however, but the huge window, set with over 576 individual panels of glass. The window stretches two storeys in height, and is supported by 4 transoms. Most of the glass dates to the 16th and 17th centuries, and you can make out historic graffiti left by visitors over the centuries.

On the first floor is the master bedchamber, also with a richly patterned plasterwork ceiling and a four-poster bed. Contrasting with the historic rooms is the final section of the house, where the Elton family lived in the mid-20th century. The Eltons were the last people to live at Trerice before it was taken over by the National Trust and you can see their 1950s sitting room and Mrs Elton's sewing room, where there is an exhibition on the Home Guard battalion which was stationed at Trerice during World War Two.

Trerice is an absolute delight; a superb 16th-century house that will live long in the memory. This is what a Tudor manor house ought to be! 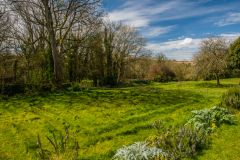 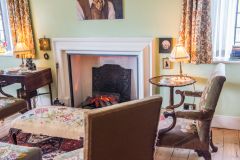 More self catering near Trerice >>

More bed and breakfasts near Trerice >>