HERITAGE HIGHLIGHTS:   One of the oldest Christian sites in Britain 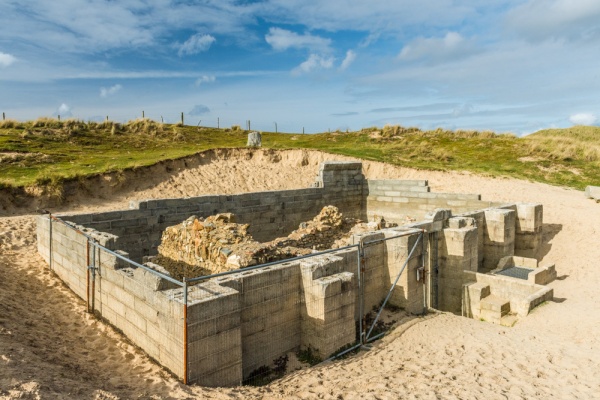 Half-buried in the dunes of Penhale Beach, north of Perranporth, are the remarkable remains of one of Britain's oldest Christian sites, the 6th-century remains of an oratory established by Piran, and Irish saint who landed on the beach here after exile from his homeland.

The saint's oratory, or chapel, remained in use until the 10th century when shifting sand forced its abandonment in favour of a new church in a more sheltered location just inland. That new church, in turn, was overwhelmed by the sand and was abandoned in 1804, leaving not one but two historic churches buried beneath the dunes. Both the Oratory and St Piran's Old Church, as it became known, have been excavated and are now open to be seen.

Curiously, though the Oratory is of ancient origin, the first written record of its existence doesn't come until 1540 when it was mentioned by the Tudor antiquarian John Leland. 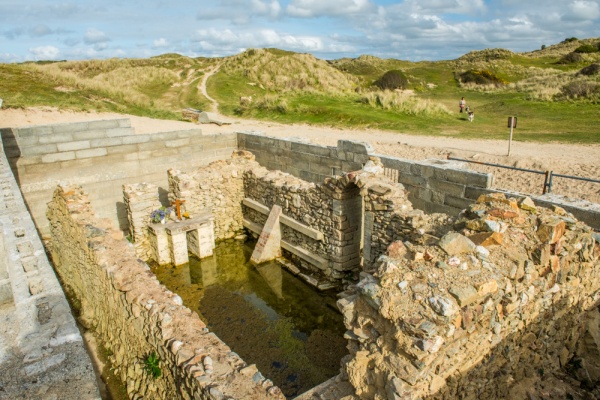 Inside the Oratory, looking east

According to legend, Piran was a 5th or 6th-century Irish monk. A jealous ruler feared his power, and had him thrown from a high cliff with a millstone tied to his neck. As his enemies watched in consternation, rather than drowning the saint began to float on his millstone across the sea towards Cornwall.

After many days floating on his unusual craft, Piran came ashore safely on a beach. The place now bears his name; Perranporth.

St Piran built a chapel on the beach. His first converts to Christianity were said to be a badger, a boar, and a fox, but soon news of his powerful preaching spread and people began to travel from long distances away to see him. Piran not only gained a reputation for miraculous powers but also as a prodigious drinker, giving rise to the expression, 'as drunk as a Perraner'. St Piran is said to have lived to the ripe old age of 206.

St Piran became the patron saint of Cornwall, and he is revered as the patron saint of tinners. He was said to have discovered tin smelting, though tin mining was carried out in Cornwall long before his arrival. The Cornish flag we know today uses his white cross on a black background, symbolic of the white tin emerging from the black ore, and also of spiritual truth shining amidst the darkness.

Though the Oratory was engulfed by sands as early as the 10th century it was exposed to view by the late 18th century, In 1835 archaeologist William Mitchell excavated the Oratory and a nearby building thought to be a baptistry, or Priest's House. A few years later in 1843 the local curate, William Haslam, rebuilt the altar and added an inscribed stone carved with 'Sanctus Piranus', the Latin for 'St Piran'. 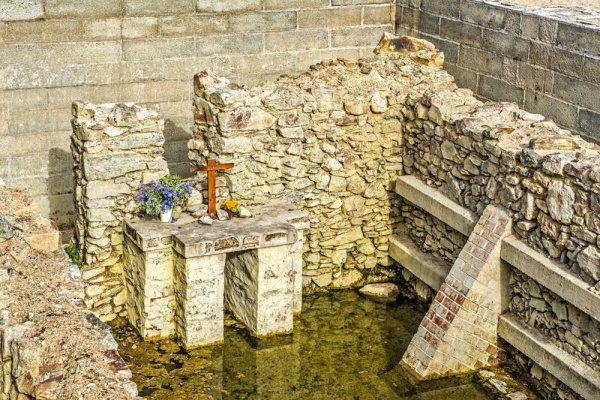 The flooded chancel and altar

The excavated Oratory became a popular destination for visitors, but unfortunately its popularity had negative consequences. Some visitors damaged the buildings and took away pieces of stone as souvenirs. To protect the ancient structure it was enclosed by railings in the 1890s to keep people out. The ever-present sand put pressure on the walls, causing structural damage. In 1910 the entire complex was encased in a stupendously ugly concrete structure to protect it.

Archaeologist Dr TG Dexter, writing in 1922, vividly expressed his feelings about the state of the Oratory when he wrote, 'If the buried church could speak, she would complain bitterly of the writers who have misunderstood her, of the trippers who have robbed her, of the Church that sold her, and of the enthusiasts who have entombed her in that hideous concrete structure'.

Continuing problems with vandalism and flooding led to the decision to bury the entire site in 1980. 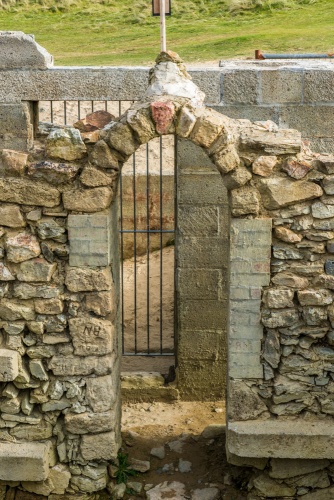 In 2015 St Piran's Trust re-excavated the building, though the concrete structure remains. There are occasional open days when you can enter inside, but the gate is locked at other times. Thankfully you can see inside the Oratory from the high and banks that surround it, and so get a very good sense of the building. The interior is frequently flooded; indeed it was covered in water when we visited. You can still easily make out the ancient altar and the arched doorways.

The Domesday Book of 1086 recorded a settlement known as Lanpiran (Piran's Church), which may have been focused on the Oratory. The Oratory stands within an ancient burial ground, and skeletons are often unearthed near the site. During the re-burial of the Oratory site in 1980, a dozen stone cists were found containing human bones.

The Oratory is still a destination for pilgrims, and there is an annual procession on 5 March, St Piran's feast day, to the Oratory and the Old Church. 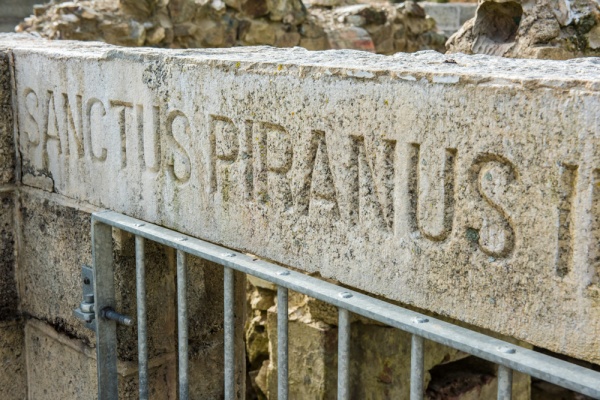 The chapel is a very simple building composed of a small nave and chancel. There are doorways in the south and east walls, and a low stone bench extends around the interior. A stone carved with Roman capitals has been built upside down into one wall. The stone is thought to date to the 5th or 6th century and may suggest an earlier settlement here.

The south doorway was rebuilt at some point, with three carved heads incorporated into the doorway arch. One carving is said to depict a cat's head.

A short distance inland is St Piran's Old Church, which has now also been excavated, and beside it is one of the oldest Celtic crosses in Cornwall. 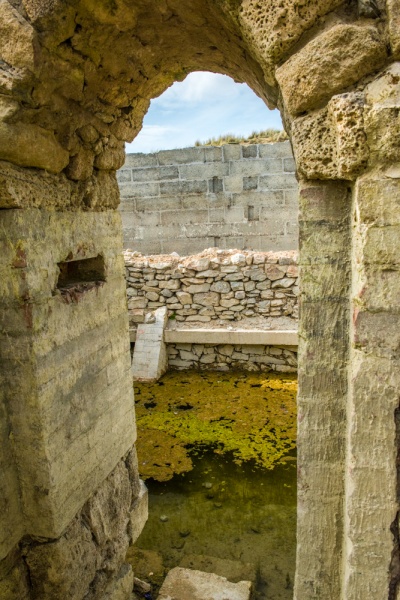 Looking through the south door

You can visit the Oratory and any time, though the door is only unlocked for special events. You can still get a very good view of the roofless interior from outside the walls.

There are no signs to the Oratory or the Old Church. The easiest way to reach it is by a footpath off the minor road to Cubert, heading towards Mount and Trebellan. Look for a layby opposite the lane to Rose and Rosehill. There is also a car park at Perran Sands Holiday Park.

From the layby, paths lead onto Penhale Sands. Head roughly north-west towards the sea and you will eventually find the cross and Old Church to your right, with a path leading left towards the Oratory. There is a useful information panel outside the church, explaining the history of the site. For a longer explanation of the route, see our article on St Piran's Old Church. 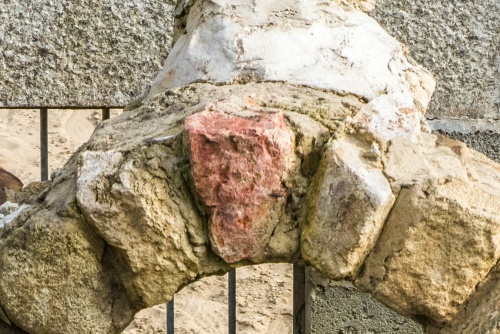 A carved head in the south doorway arch