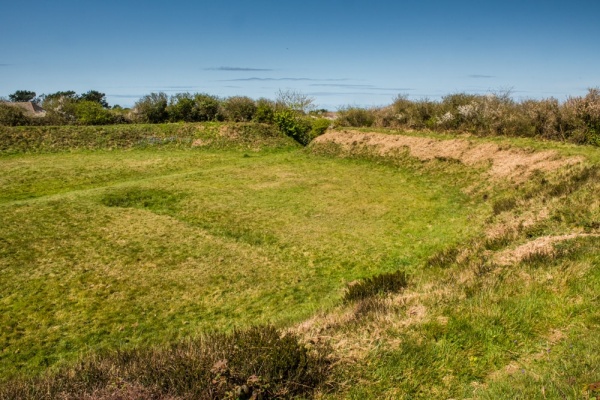 On the edge of the Cornish village of Rosehill, near Perranporth, is one of the most intriguing historic sites in Cornwall, a medieval amphitheatre, or 'plen an gwary', where miracle plays were performed throughout the Middle Ages. It has been called Britain's earliest theatre.

Perran Round is generally thought to have been built specifically as an open-air amphitheatre but it is possible that the site was adapted from an earlier Iron Age enclosure. It may even have formed part of a Romano-British farmstead. One suggestion is that the area was once used as a court of justice.

Miracle plays in the Cornish language were held at numerous sites around Cornwall during the medieval period, but Perran Round is by far the best-preserved example and has become a focal point for Cornish culture and pride in Cornish heritage. The annual Cornish Gorseth has been held here on numerous occasions, and following a resurgence of interest in Cornish heritage there are miracle plays performed here on a regular basis. 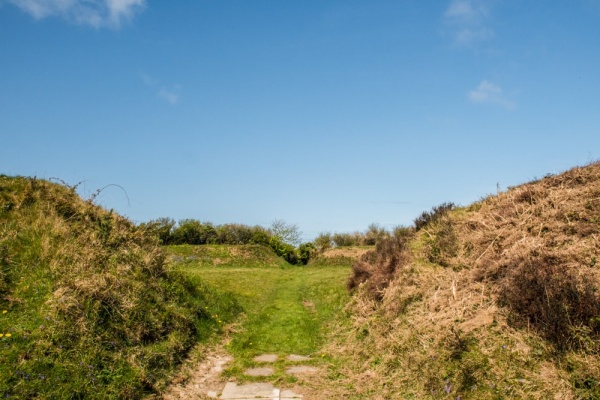 What is a Miracle Play?

Cornish miracle plays were a form of theatrical production; dramas describing Biblical events or the life of a saint. The life of saints like St Meriasek (the patron saint of Camborne) would have been popular subjects. A miracle play might last as long as 2-3 days. The plays would have been performed in the Cornish language, and thus would have a more direct connection to the local people than a regular church service conducted in Latin.

Cornish miracle plays gradually died out as the Cornish language faded from common usage, but the medieval miracle plays are among the oldest documents in the Cornish language that survive today. The longest play is the 'Ordinalia', which covered the Creation story, the Crucifixion, and the Resurrection. Historians think that the earliest plays were written down by monks from Glasney College in Penryn.

Historians suggest that there are remains of nine 'plenys an gwary', and another 19 sites with no visible remains above ground. They would have been in use from as early as the 14th century or perhaps even slightly earlier.

The Round is made with high earthwork banks for seating spectators, who look down on a very wide open space in the centre. There are opposing entrances piercing the circular amphitheatre banks.

The amphitheatre was surveyed by William Borlase for his 1758 'Natural History of Cornwall'. Borlase's drawing of the Round shows that it has changed very little over the centuries, though he does show a series of stepped terraces, suitable for seating, on the inner face of the earthwork bank. There is no evidence of any terraces today; the earthworks are simply a steep slope.

It is entirely possible that Borlase was wrong and that the audience stood in the centre of the area while the actors performed the play around them, using the Devil's Spoon to enter and leave the stage, which would have been full of colourful theatrical sets and props. It is impossible to tell exactly how many people would have attended performances, but the area is large enough to accommodate more than 2,000 spectators. 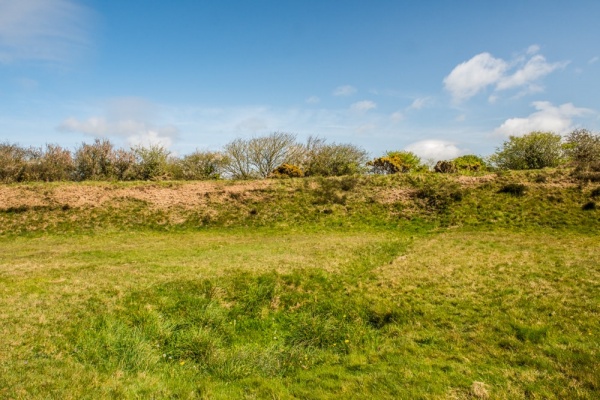 The 'Devil's Spoon' depression and trench

In the centre of the amphitheatre is the Devil's Spoon, a shallow depression with a trench leading to it. The Devil's Spoon was used during performances.

The amphitheatre's central arena is 45m across, with the inner earthwork bank rising roughly 2.6m to a relatively flat top some 2m wide.

In the early 20th century Perran Round was used as a gathering place for political rallies. During WWII it was used as a training ground for the Home Guard.

Perran Round is easy to find. It is located on the north side of the B3285 between Rosehill and Perranporth. There are no obvious signs directing you to the site, but there is a small parking area and an interpretation panel beside the amphitheatre entrance.

Perran Round is a fascinating site. It is easy to climb the earthwork banks and wander across the top, looking down into the performance area, and even easier to simply stroll into the centre of the amphitheatre and examine the Devil's Spoon. It won't take long to explore the site but it is well worth a stop.

Perran Round is cared for by the St Piran Trust, who also look after the nearby St Piran's Oratory and St Piran's Old Church. 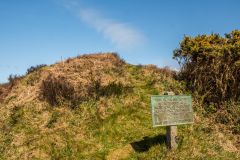 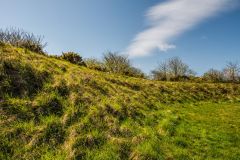 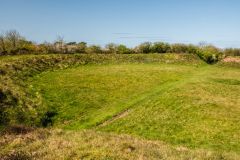 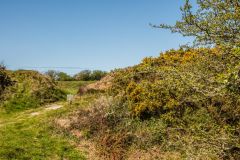 About Perran Round
Address: B3285, Rose, Perranporth, Cornwall, England, TR4 9PF
Attraction Type: Prehistoric Site - Landmark
Location: On the B3285 just east of Rosehill village. There is a parking area on the north side of the road.
Website: Perran Round
Location map
OS: SW778544
Photo Credit: David Ross and Britain Express

Nearest Accommodation to Perran Round:

More self catering near Perran Round

More Hotels near Perran Round

More bed and breakfasts near Perran Round