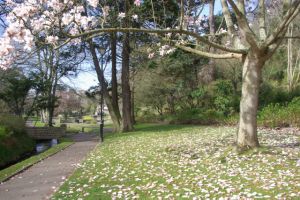 The area now occupied by Trenance Park was once a marshland, frequently flooded by the River Gannel at high tide. It belonged to the Manor of Treninnick and was called Old Moor. The Manor itself dates to at least the time of the Domesday Book in 1086.

The name comes from the Cornish words Tre and Nans, meaning a valley farm. We know there was a farm here in 1327, and farming continued right up until the early 20th century. Just outside the park are Trenance Cottages, built in the 18th century as a malthouse, then converted into dwellings.

Cutting through the valley is a railway viaduct built in 1849 by Jeffrey Treffry, a wealthy engineer. Treffry owned Newquay harbour and wanted to create an easy transport link from the harbour to the railway line. The viaduct is 630 feet long and stands 98 feet high. It was originally built of timber, but rebuilt in stone in 1874. It was then leased to the Great Western Railway in 1877 on a 999-year lease.

Trenance Gardens were laid out in 1906 in a sheltered valley location that gives sub-tropical plants a chance to thrive. One feature of the gardens is a series of picturesque footbridges spanning a stream.

The first major addition to the park came in 1932 when the boating lake was created. The lake was partly a project to alleviate unemployment; local men were given dole money and allotted a pasty and some tobacco daily. Each week their wives were given a packet of tea. The Prince of Wales (later Edward VIII) came to Newquay to see the work in progress.

Since it opened, the boating lake has been the scene of many a challenge race. The lake has proved a major attraction for local bird life, and species such as moorhens, coots, cormorants, and swans are regularly seen. Less often seen but still present are otters.

Feeding into the boating lake is the outflow from Mellanvrane Mill. at the far end of the gardens. There has been a mill here since 1775, and the leat which once fed the mill now flows into the lake. Much of the mill itself is now partly hidden in a private garden.

Within the 23 acres of Trenance Park is Newquay Zoo, the only zoo in Cornwall, plus a leisure centre, restaurants, pitch and putt, crazy golf, playground areas, a bowling green, and many more family leisure activities.

There is no entrance fee to the park, and there is plenty of free parking along the main road, beside the lake.

More self catering near Trenance Gardens >>