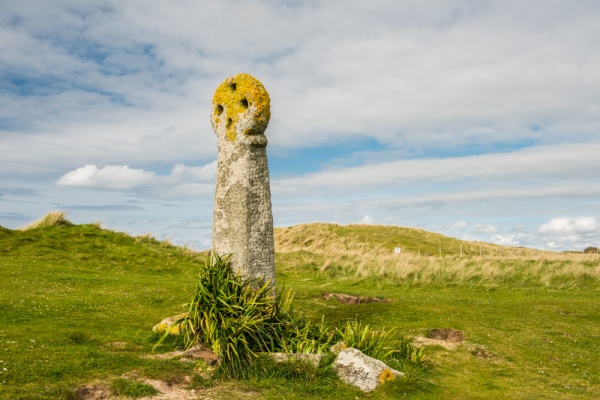 Amid the dunes of Penhale Sands, just a stone's throw from the early medieval St Piran's Old Church, stands one of the oldest stone crosses in Cornwall. The cross and the church stand within an ancient oval enclosure dating to the pre-Christian period.

St Piran's Cross stands just over 8 feet high (2.4m) and is the only three-holed cross in Cornwall. The wheel-head has holes through the top and sides of the cross-head, but where you would expect the bottom hole to be is only a depression in the stone. Was it simply left unfinished?

The cross stands just south of the Penhale Army Training Estate and within the huge sand dune system of Penhale Sands, the largest sand dune ecosystem in Cornwall. The dunes have been named a Site of Special Scientific Interest (SSSI) and a Special Area of Conservation (SAC). 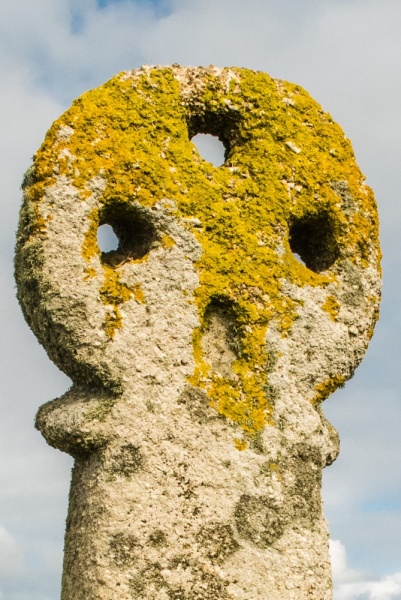 The cross is carved from granite and stands 17m south of the church chancel. The head is 0.6m in diameter. There is a circular boss in the centre of each face. The head and rectangular shaft were carved from a single piece of stone. The shaft measures 0.5m x 0.4m at the base and tapers slightly towards a collar at the base of the head. A 19th-century source mentions a cross-base, but there is no evidence of this today. It is very likely buried beneath the sand.

The cross was mentioned as a boundary marker in a 10th-century charter, where it was called 'Cristen-mael'.

The cross may have been erected to mark the trail to the nearby Oratory of St Piran, established by the 6th-century Irish missionary Piran, the patron saint of Cornwall. Piran's Oratory was buried by sand and abandoned in favour of St Piran's Old Church. The Old Church, in turn, was abandoned and a new church built further inland at Perramzabuloe. 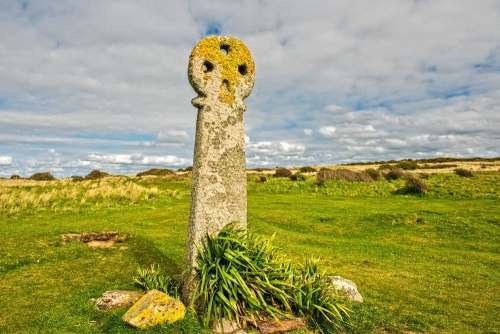 Yet another view of the cross

The cross is not the easiest historic site to find. The easiest way we found was to park on the minor road from Perranporth to Mount. There is a small layby opposite the lane to Rosehill.

The cross is fascinating on its own, but combined with the Old Church and the nearby Oratory it forms one of the most fascinating historic sites in Britain. The atmosphere of Penhale Sands is simply stunning, and to see the cross rising up out of the featureless dunes is a sight you will not soon forget.

NOTE
Do not mistake the nearby modern concrete cross overlooking St Piran's Oratory for this authentic Celtic cross! 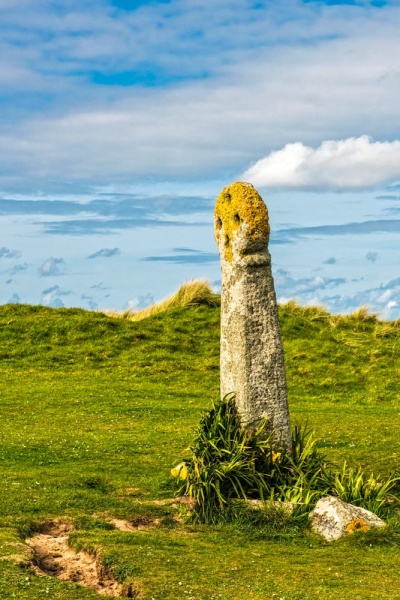