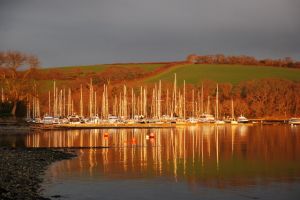 Mylor is an attractive fishing village on the west bank of Carrick Roads, just north of Falmouth. it is a centre for boating, with a popular yacht harbour for pleasure craft and easy access to the Fal River.

Mylor was at one time the westernmost naval dockyard. It is really several scattered villages including Mylor Churchtown and Mylor Bridge.

The ancient church of St Mylor, or Melorus, boasts a 17-foot high Celtic cross found being used as a buttress during a restoration of the church in the late 19th century. The cross, now re-erected in the churchyard, is said to have marked the original site of St Mylor's grave. Nearby are graves of many packet ship captains and sailors.

Also in the churchyard are graves to over 60 sailors who served aboard the HMS Ganges. The vessel was moored at Mylor for many years and was infamous for the difficult conditions and harsh discipline exercised by the ship's captain on the crew.

A fascinating historical dispute is told about the church; it seems that in the late 13th century agents in the employ of the Earl of Cornwall were carrying off sand and soil from the glebe land (land used to support the church).

The Bishop of Exeter collected heavy customs duty on the transport of these goods, but he wanted more. He threatened the Earl with excommunication but was forced to back down and give away the money he had collected as tax.

As for the church itself, it was heavily rebuilt in the Victorian period but retains its original Norman doorway.

A traditional mummer's play, commonly believed to have been invented at Mylor, has recently been shown to have been developed in Truro. 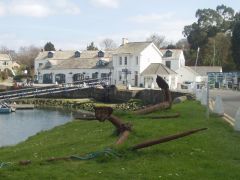 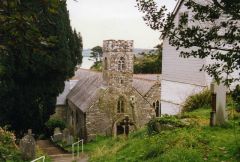 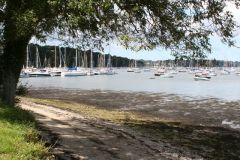 More self catering near Mylor >>

More bed and breakfasts near Mylor >>