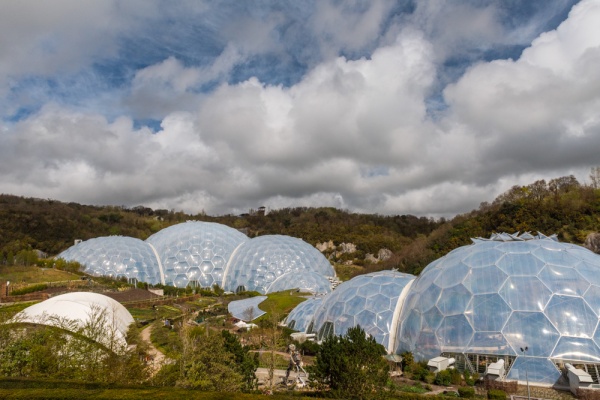 One of the most popular visitor attractions in south-west England, the Eden Project is a series of large biodomes (or 'biomes') housing collections of plants from around the world, sited in an old clay pit. The biodomes are made of plastic cells supported by a framework of steel, creating unique environments for a wide variety of plants.

The two main domes provide environments for Mediterranean and Rainforest species. Plants are labelled according to their medicinal uses, emphasising the Projects theme of how humans interact with and depend upon the natural world. 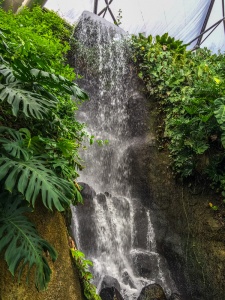 Surrounding the two main domes, or 'biomes' as they are called, are planted landscapes dissected by curving pathways lined with modern sculpture. Sculptures include a gigantic figure of a bumblebee and a huge robot made from recycled electrical appliances.

The largest of the biomes is the Rainforest Biome, covering 3.9 acres. It is home to plants like bamboo, coffee, rubber trees, and banana. As you might expect, this environment is kept humid, with a warm, tropical temperature. The most popular feature is a large waterfall at the top of the biome, reached by a series of ramps.

By contrast, the Mediterranean Biome is less than half the size, covering 1.6 acres, and maintains a dry environment suitable for arid and warm temperate plant species like grapes and olive trees.

The biome structures are completely self-supporting, with no internal pillars or supports to get in the way. They are formed like gigantic geodesic domes, with panels as large as 9 metres wide.

The Outdoor Biome is not covered but is open to the sky. It offers a temperate environment with featured plants including hemp, tea trees, sunflowers, and hops.

In addition to the main garden areas, there is The Core, an education area to tell the story of how humans and plants interact, and our relationship with the natural world. Inside the core is a remarkable 75-tonne sculpture called The Seed.

The Eden Project is very well signposted from all major roads surrounding St Austell and is well served by local buses. The Project is extremely popular with families and school groups, so be prepared to share the space with a LOT of other visitors. I found that the most enjoyable way to experience the Eden Project was to arrive at the morning opening time before the site filled up.

Having said that, the Eden Project covers such a large area that it will take hours to explore and take in all there is to see, and even then you are guaranteed to miss something interesting! It's the sort of place you'll want to come back to again and again.

Note that there is a joint ticket with the Lost Garden of Heligan, offering discounted entry to both properties, and you can save money by ordering online. 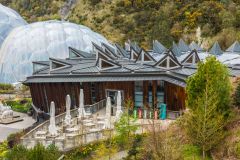 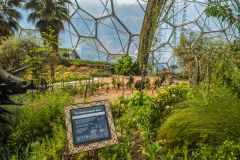 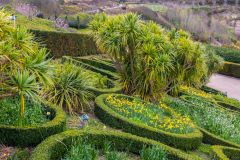 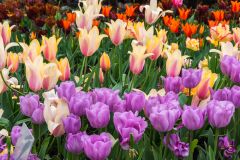 More self catering near Eden Project >>