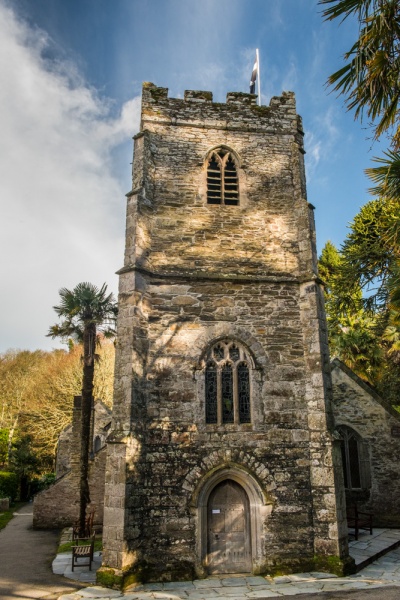 A very tidy little country church on the banks of a creek, made remarkable by its beautiful setting. The slope of the land means that you can stand at the lych gate entrance to the churchyard, and find yourself at a level with the top of the church tower, while the body of the church stretches out far below you.

An ancient legend says that the church stands at the spot where Joseph of Arimathea came ashore with Jesus (think of William Blake's famous line, '... And was the holy Lamb of God on England's pleasant pastures seen?'). A stone by the creek is said to be the one on which Jesus stepped when leaving his boat, and the stone is inscribed with undecipherable carvings.

The current building dates to 1261, when it was built to replace a Norman church attached to Plympton Priory. John le Sor, Lord of Tolverne, successfully prised the living away from the priory, in exchange for agreeing to give 13s 4d from parish revenues to the Priory each year. The amount is still paid to this day, though it now goes to the heirs of the last prior of Plympton.

Unfortunately, well-meaning Victorian restorers got their hands on St Just's church, and little is now left of the 13th-century building beyond the chancel.

Within the chancel is a double piscina from the 13th-century church. There is an octagonal 15th-century font, and the lectern sports a winged lion carving from a medieval misericord.

One unusual feature is a memorial brass of a priest, which from the style of the costume must date to around 1520. Now, there's nothing odd about an early 16th-century brass in an English country church, but it is rare to find brasses in Cornish churches at all.

The dedication to St Just is also unusual; there is only one other English church dedicated to this little-known saint, at St Just in Penwith, also in Cornwall. Just east of the church are the remains of a medieval holy well. 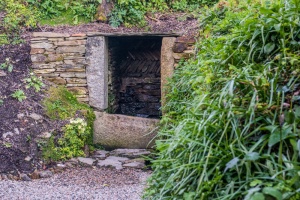 St Just is signposted from the coastal road to St Mawes. A single road leads down to the village parking lot above the churchyard. There is an honesty box for car parking. From the car park, a lovely path winds through the terraced churchyard, which is more garden than graveyard, with seats for enjoying the peaceful surroundings and a quiet stream running down to the waterside below.

Just before you get to the church a path leads along the water to the restored holy well. Pause a moment and look out over the quiet inlet, where boats bob at anchor.

We came on a lovely spring evening and I thought it was one of the most beautiful places I'd ever seen in Cornwall, and that's saying a lot! 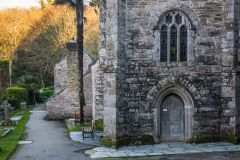 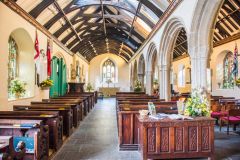 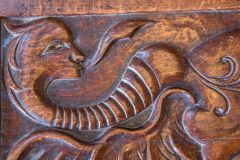 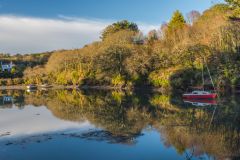 More self catering near St Just in Roseland Church >>

More bed and breakfasts near St Just in Roseland Church >>