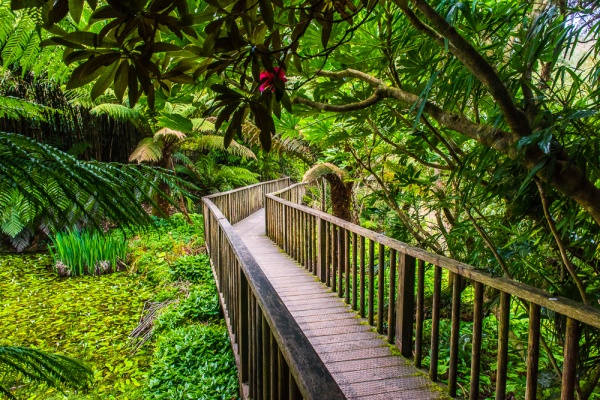 Heligan was the family seat of the Tremaynes for over 400 years. By the early 20th century the house fell into neglect and the gardens were allowed to become overgrown. Now an ambitious reclamation scheme has pushed back the years and allows visitors to see these glorious slumbering gardens as they once were.

The Tremayne family purchased the Heligan estate from the Hill family in the 16th century and built a new manor house here in 1603. The house was rebuilt in 1692 in William and Mary style. The superb gardens surrounding the house were begun by Rev. Henry Hawkins Tremayne in the late 18th century. Rev. Tremayne called in Thomas Gray to create a garden plan around 1780, and this plan helped the eventual restoration work. Tremayne planted trees to screen the site and laid out the northern gardens and rose garden. 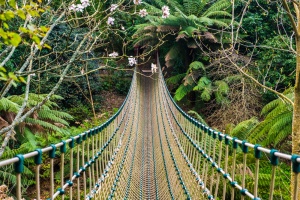 The Burmese Rope Bridge across 'The Jungle'

Later generations of the family added a wild area known as The Jungle, with subtropical plants including giant tree ferns, overlooking the fishing port at Mevagissey below. John Tremayne (squire from 1821) installed a long drive from Pentewan in order to make it easy for horses to haul loads of coal up the hill. Rather than make the drive purely functional, the squire planted ornamental trees and an impressive avenue of Cornus capitata.

The last resident Tremayne was Jack, who built the Italian garden, but then relocated to Italy itself, and leased the house. Heligan was used as an army base in WWII, and the house was later converted into flats and sold.

While the house was undergoing all these changes and the estate lacked a resident owner, the gardens were neglected and quite literally became overgrown and 'lost'. For over 70 years the gardens slumbered on and were covered by an overgrowth of brambles, weeds and dense foliage.

In the 1990s a group of garden enthusiasts joined together to restore the gardens, a process that was featured on a 1996 TV series and became the largest garden restoration in Europe. The gardens were fully restored to their early 20th-century glory and opened as a visitor attraction. 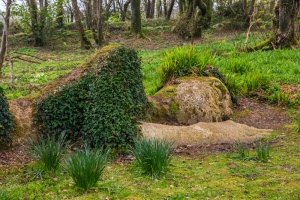 The most exciting part of the restored gardens is the Pleasure Grounds, a network of exciting garden features linked by winding paths. Included are Italian gardens, a New Zealand garden, ravine garden, a greenhouse featuring exotic fruits, a wishing well, and a crystal grotto. In the south of the gardens are the Jungle and the 'Lost Valley', bursting with gunnera, ferns, bamboo, palms, and other exotic trees and shrubs.

A Burmese Rope Bridge crosses the Jungle; it's a massively popular attraction for children - and for this writer, who tried to photograph with one hand while holding onto the wildly swaying ropes with the other hand.

There are 80 acres of delights, including rare shrubs, a collection of Himalayan rhododendrons, exotic greenhouses, and romantic follies. The Jungle is a playground for exotic and unusual varieties of sub-tropical plants, with four ponds arranged on terraces above each other. Here you will find the largest collection of tree ferns in Europe, with boardwalks taking visitors through this unique environment.

The gardens are maintained as a living museum of Victorian gardening, with over 300 different varieties of fruits and vegetables grown using traditional techniques and tools. One of the unique features at Heligan is the pineapple pit, the only remaining pit in Europe, which raises pineapple plants using manure for warmth. A pineapple from Heligan was given to Her Majesty Elizabeth II to celebrate her Golden Wedding anniversary.

The gardens are very well signed from nearby roads. You can also purchase a joint ticket with the Eden Project. 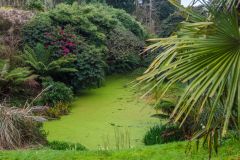 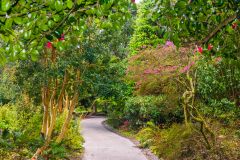 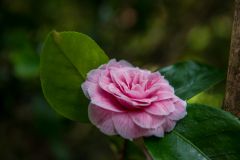 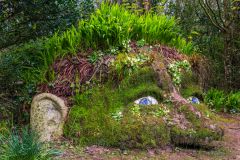 More self catering near Lost Gardens of Heligan >>

More bed and breakfasts near Lost Gardens of Heligan >>