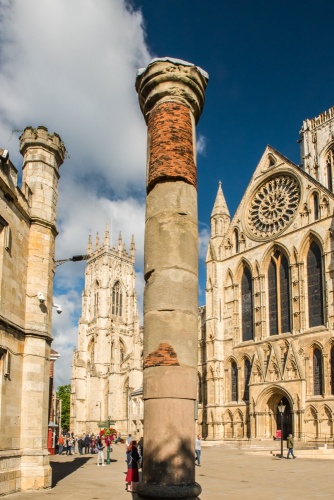 Directly opposite the south front of York Minster is one of the city's oldest historical attractions - and one that is probably missed by most of the visitors that descend of the Minster each day.

Standing some 9.5m high (roughly 31 feet) is a Roman column, one of sixteen similar columns that supported the roof of the basilica, or headquarters of Eboracum, one of the most important roman forts in northern England. The basilica stretched 72 metres and was as high as the present Minster's nave. It was very likely inside the basilica that Constantine was proclaimed Emperor of Rome in AD 306. 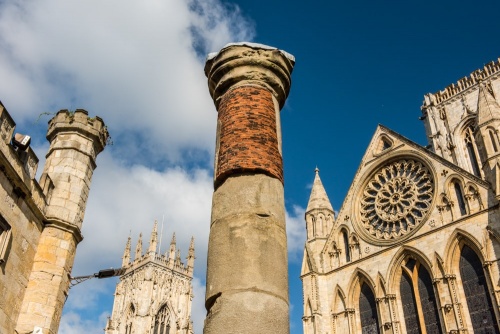 The column capital and York Minster

The column was discovered buried under the tower of York Minster in 1969, broken and lying on its side. The Dean of York Minster gave the column to the City of York to commemorate the 1900th anniversary of the city's founding in AD 71. It was re-erected in its present location in 1971.

If you explore the Minster undercroft you can see a second Roman column still in its original position, along with other finds from the basilica.

The Roman Column was erected around AD 100 by the 9th Legion. In the 4th century it was reassembled by the 6th Legion. It is cylindrical in shape and is made of gritstone. The style is Tuscan, an architectural order often used by the Romans for military architecture. 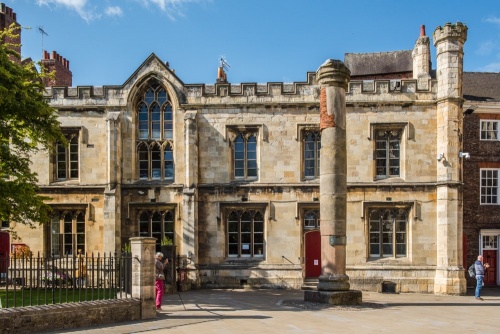 The column from across Minster Yard

The column stands on a moulded base atop a square plinth. The moulded capital at the top has been damaged and you can where the column has been repaired with stone and Roman tiles over the centuries.

Wrapping around the column at about 1m off the ground is plaque that reads:

THIS ROMAN COLUMN ONCE STOOD WITHIN THE GREAT HALL OF THE HEADQUARTERS
BUILDING OF THE FORTRESS OF THE SIXTH LEGION (WHOSE EMBLEM WAS A BULL) IN THE
FOURTH CENTURY A.D. IT WAS FOUND IN 1969 DURING THE EXCAVATION OF THE SOUTH
TRANSEPT OF THE MINSTER, LYING WHERE IT HAD COLLAPSED.

IT WAS GIVEN BY THE DEAN AND CHAPTER TO THE YORK CIVIC TRUST WHO IN 1971
ERECTED IT ON THIS SITE TO MARK THE 1900TH ANNIVERSARY OF THE FOUNDATION OF
THE CITY BY THE ROMANS IN A.D. 71.

The Roman Column is a Grade II listed building. 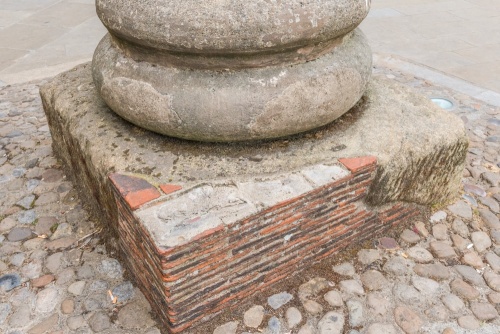 The column stands in Minster Yard opposite the south entrance to York Minster at the western end of Deangate. It is very close to the iconic statue of Emperor Constantine. The site is open at any time. 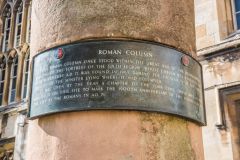 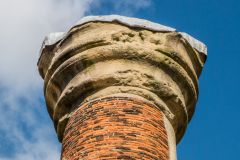 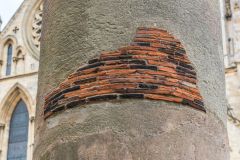 More self catering near Roman Column