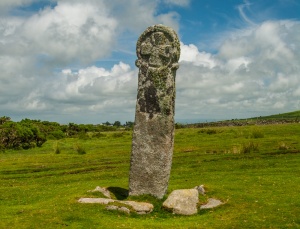 Longstone Cross, or Long Tom as it sometimes called, is one of the best-preserved examples of a wayside cross, still in its original position on the southern edge of Bodmin Moor. The stone stands beside a long-stablished route on the southern edge of Craddock Moor, and at least 2 other crosses are aligned on this ancient route across the moor.

The cross was first investigated by antiquarians in the 18th century, and is one of the most frequently recorded wayside crosses due its well-preserved state and ease of access.

The short answer is that no one knows. It may have originated before the Norman Conquest or as recently as the 15th century. There is simply no way of telling.

The cross is carved from local granite and stands 2.6m high (about 9 feet). The head is circular, about 0.7m across. The shaft is a slender rectangle, but the cross head tapers markedly towards the top.

The cross head is decorated with an incised carving of a cross on the north and south faces. The south face is much better preserved. Two faces of the shaft are carved with a plain rectangular panel. At the base of the cross are large stone slabs with were originally used to keep the cross upright.

Was the Longstone Cross originally a pagan site?

There are a few curious things about the cross. It sees to be aligned with the 3 stone circles of The Hurlers and the barrow at Rillaton. It is also possible that the cross was a solitary standing stone, part of the larger ceremonial landscape, which was carved with a cross head during the spread of Christianity to this area. It was common practice for early Christians to adapt existing ritual sites to their new religion. Could the stone have been an existing pagan standing stone adapted to Christian symbolism? 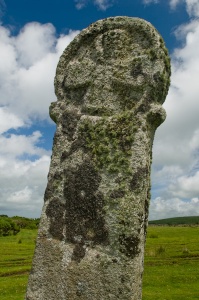 Bodmin Moor is a treasure trove of ancient sites, from burial mounds to stone circles. In addition to the prehistoric remains there are quite a few early Christian crosses, with most dating between the 9th and 15th centuries. Wayside crosses serve a dual purpose; they were a gathering place for preaching the Christian message, but also served as waymarkers; signposts in a landscape that could be treacherous and difficult to navigate.

Wayside crosses might mark tracks between villages, paths to religious sites, or routes for ceremonial routes like funeral processions.

In Cornwall such wayside crosses tended to be modelled after churchyard crosses or market crosses. Most were made from a single slab of stone topped by a rounded wheel head carved with religious figures. The most common wheelhead decoration was a relief carving of Christ, arms outstretched. The cross shaft might also be carved. Curiously, the earliest crosses often had the most elaborate, intricate carving on the shaft.

Thirty five crosses have been found on Bodmin Moor, and of these, 21 are wayside crosses.

The cross stands on the road running through Minions, toward Redgate. On the north eastern edge of the village is The Hurlers stone circle, and footpaths lead to the Cheesewring rock formations. There is no parking area by the stone, but it is easy enough to pull off onto the verge. 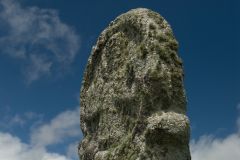 More self catering near Longstone Cross