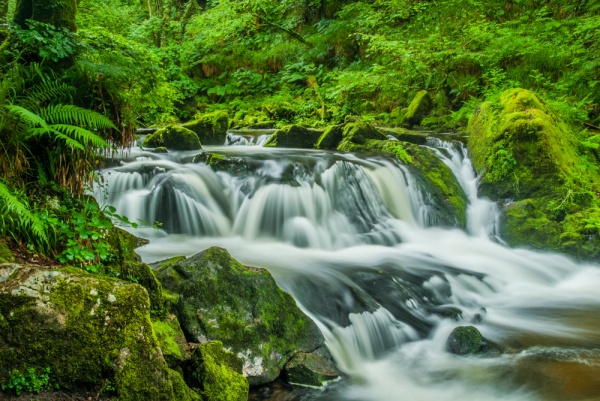 The River Fowey runs down from the heights of Bodmin Moor, then briefly turns west outside the village of St Cleer before continuing south on its journey to the port town of Fowey. At St Cleer it runs through a picturesque wooded area, set aside as the Golitha Falls National Nature Reserve, one of the most popular natural beauty spots on Bodmin Moor. The reserve is managed by Natural England (formerly English Nature) who have reintroduced traditional methods of coppicing for woodland management.

The reserve takes in a beautiful series of waterfalls, reached by a shaded footpath along the river. The reserve has been named an Area of Outstanding Natural Beauty, and with good reason, for the combination of the forest and waterfalls make exploring the reserve a special experience. 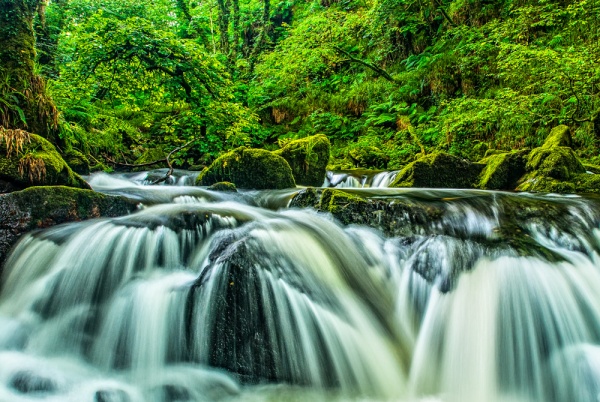 A closer look at the falls

There is a car park at Draynes Bridge, on a minor road about one mile west of St Cleers. From the parking area a signposted trail leads along the river, first south-west, then north-west until you reach the waterfalls. The route is constantly changing; at the beginning o the trail the woodland is spread out, with airy, spacious glades, but as you approach the waterfalls the trail passes through a narrow, rocky gorge with steep sides looming above you.

It won't be immediately obvious, but as you walk through the woodland you are exploring a historic area where the trees have been managed by coppicing since at least the time of the Domesday Book in 1086 and possibly much earlier. The woodland is still being managed in part by the same coppicing methods used for over 1000 years. You can also see evidence of past industrial use, with several old buildings once used by the Wheal Victoria copper mine visible past the falls.

The best time to visit is after heavy rains, when the falls are at their most spectacular. Of course if you visit after heavy rains you'll need to make sure you have good waterproof footwear that can deal with mud on the trail. The going is quite level and is suitable for anyone with reasonable mobility. Beyond the waterfalls the going gets a bit more difficult. 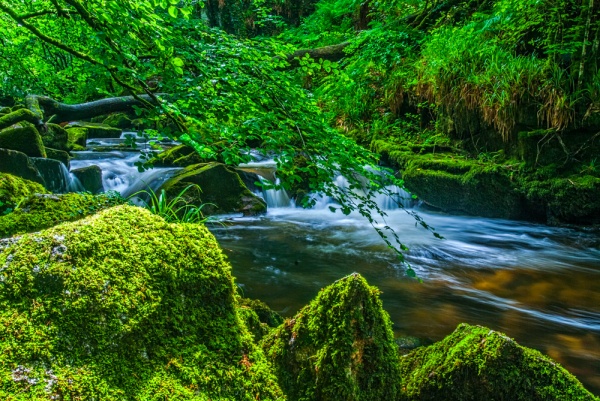 The River Fowey above the waterfalls

The falls are not spectacular in the way of St Nectan's Glen in North Cornwall, but are more of a series of gentle cascades. The river falls 90 metres over the course of several small cascades.

The area is also a Site of Special Scientific Interest (SSI), preserved for its woodland plant life, liverwort, mosses, and lichens. Over 120 species of mosses grow on the forest floor, and over 50 varieties of lichen. The area is especially suited to plants that thrive in light soil, such as bilberry, greater woodrush, wood anemone, and hard ferns. Wildflowers thrive, especially in the spring, when bluebells at their best.

Though its precious plant life is the reason the woodland has been preserved, it is also home to an abundance of wildlife , including several species of bats such as the lesser horseshoe, nactule, and brown long-eared bats.

Nuthatches breed on the reserve, as do buzzards, dippers, and treecreepers. There are over 80 species of moths, and butterflies abound, especially small skippers, speckled wood, and marbled white varieties. 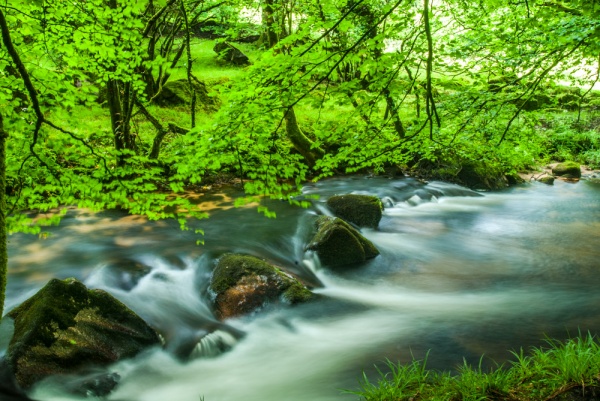 Woodlands beside the river

Dormice live in the hazel coppices, and salmon and sea trout swim in the river. Otters can often be seen playing amongst the rocks by the waterfalls.

In addition to the main waterfall trail, there are several other waymarked walking trails, including trails suitable for wheelchairs and people with limited mobility.

Halfway between the nature reserve car park and St Cleers village stands King Donierts Stone, an ancient carved cross commemorating Doniert, or Durngarth, one of the last kings of Cornwall, who is said to have died in AD 875 in a fight just below the lower falls at Golitha.

Our family enjoyed a wonderful afternoon outing to Golitha Falls. Even our youngest managed most of the walk without needing to be carried. The woodland environment is wonderfully atmospheric, and the falls make a perfect exclamation point for a lovely walk.

More self catering near Golitha Falls