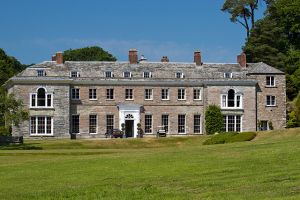 Boconnoc is an elegant 18th-century house with late Elizabethan foundations, set in the largest park in Cornwall. Boconnoc estate dates to at least the time of the Domesday Book of 1086. Boconnoc has been featured in several film and television series, including the original 'Poldark' series and 'My Cousin Rachel'. In the grounds are a water-powered sawmill, a 14th-century church, a deer park and 20 acres of gardens.

The estate was recorded in the Domesday Book of 1086 as Bochenod, but the name probably comes from a combination of old Cornish words meaning 'the dwelling place of Conoc'. The first recorded owner of the estate belonged to the De Cant family. In the 13th century, a fortified tower house was erected, called the Tower of Boconnoc.

In 1579 Sir William Mohun purchased the estate and built a new Elizabethan house. The Mohuns held the estate until 1712 when the 4th Baron Mohun was killed in a duel. His widow sold the estate to Thomas Pitt, a wealthy merchant who made a fortune in India and served as Governor of Madras.

Pitt was the first of a long line of successful politicians that included his grandson, William Pitt, and great-grandson, Pitt the Younger. Pitt got the money he needed to buy Boconnoc by selling the 'Pitt Diamond' to the Regent of France. The jewel was later set on the hilt of Napoleon's sword, and can now be seen in the Louvre Museum in Paris.

Around 1721 Thomas Pitt began to build a new Georgian house to replace the earlier medieval mansion. His son, also named Thomas, extended the house with two wings, forming an L-shape.

He also had a hand in erecting a striking obelisk on the hill above the house, in memory of Sir Richard Lyttleton.

In 1804 Thomas Pitt was also killed in a duel. The house passed to his sister, Anne, who married Lord Grenville, the Prime Minister. FromLady Grenville Boconnoc passed to the Fortescue family, who still own the property, though not without some hardship along the way!

During WWII American troops were stationed at Boconnoc, but by the time the owners took possession again after the war they had no money to keep the property up, and Boconnoc was left derelict and was in danger of becoming nothing more than a ruinous, romantic shell.

Anthony and Elizabeth Fortescue purchased the estate and began the long process of restoring the historic house and gardens. The restoration of Boconnoc House took 12 years, but the result was awarded a Historic Houses Association / Sotheby's Restoration award.

The house is open for private hire, weddings, and corporate entertainment. Group visits can be arranged, with guided tours and lectures on the house and its history.

The historic gardens are also open for pre-booked tours, plus several charity open days each year. Tours include the garden, house, and nearby church.

Garden: A 17th-century deer park with 100 head of deer is set in a larger estate with parkland and formal gardens surrounding the 18th-century mansion of Boconnoc House. The gardens are lush with colour in spring and summer. 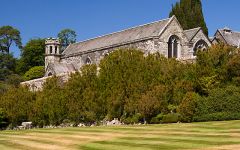 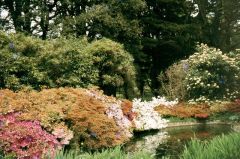 More self catering near Boconnoc >>

More bed and breakfasts near Boconnoc >>