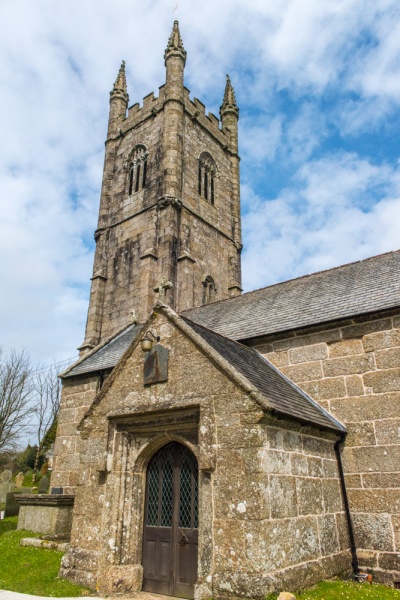 The village of Lanlivery sits high on a hilltop west of Lostwithiel, surrounded by attractive cottages and just opposite a medieval inn. No one knows exactly how long there has been a church on this elevated site. There is evidence of Norman stonework in the base of the striking west tower, but the circular churchyard enclosure suggests a very early pre-Norman date. The village name is a clue; the prefix 'lan' comes from the Celtic word for a monastery or church.

Early records suggest that the first church here was dedicated to St Vorck, of whom almost nothing is known. Lanlivery church was certainly a place of importance locally, and acted as the mother church for chapels at Lostwithiel and Luxulyan.

The present church dates to the 15th century, with the addition of a 17th-century granite tower, visible for miles across the surrounding landscape. At almost 100 feet high the tower is the third highest in Cornwall and acted as a landmark for sailors. The top was painted white to help ships entering Fowey harbour. 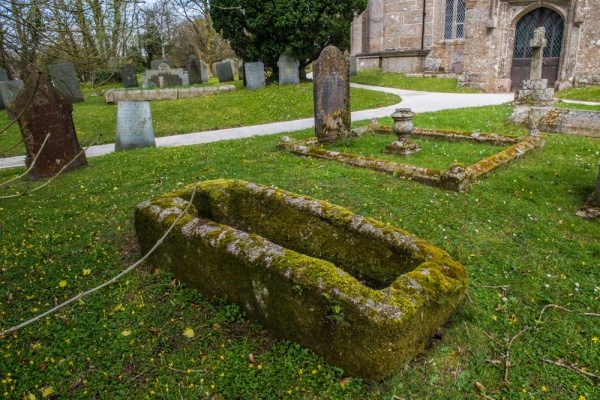 The Norman coffin in the churchyard

Inside the tower is a large painted board depicting the letter of thanks written by Charles I to the people of Cornwall in 1643 for their support during the Civil War. The letter, written from the king's court-in-exile in Oxford, was sent to every parish in Cornwall and many churches across the county still have painted boards proudly reproducing the letter's message. A later royal visited the church in more peaceful times, and you can find Prince Charles' signature in the visitor's book.

The letter from Charles I is particularly relevant to Lanlivery, where the staunchly Royalist Kendall family were lords of the manor. Colonel Nicholas Kendall led a band of soldiers in a successful attack on Bodmin and later lost his life while fighting for the king at the siege of Bristol.

Near the Charles I painted board is a printed board from 1811 showing five bell-ringers at their work, together with a rhyming guide to bell-ringing. The delightful verse reads:

Hark how the chirping Treble sings most clear,
And covering Tom comes rolling in the rear:
Now throw them up on end that all may see
What laws are best to keep sobriety:
We ring the quick to church the dead to grave
Good is our use such usage let us have:
To swear or curse or in a choleric mood
To strike or quarrell 'tho he draws no blood
To wear a hat or spur or overturn a bell
Who by unskilful handling mars a peal,
Such shall pay sixpence for each single crime
To make him cautious against another time:
And we the whole society do agree
To spend our fines in peace and unity. 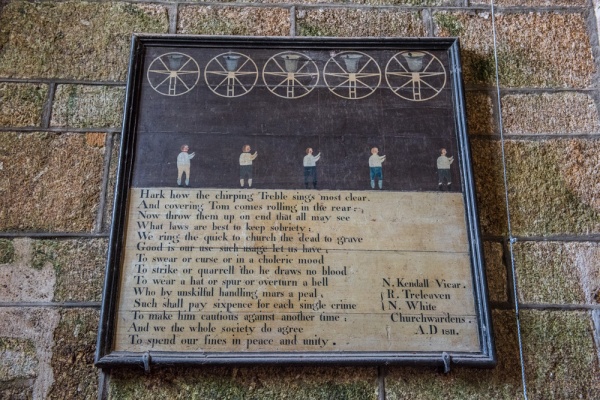 The porch is 15th century, and over the gable arch is a 1755 sundial. The impressive organ dates to 1888 and was made for the Congregational Church in Truro.

Many of the church furnishings date to a Victorian restoration, including the pulpit. Near the pulpit is a stone slab carved with the date 1643, thought to have formed part of a tomb chest for Jane Kendall.

Lanlivery church was closely connected to the Kendall family, and within the church are memorials to generations of the family. On the south wall is a memorial to the daughter of Bernard Kendall, who died in 1658 and was buried in the same grave as her grandfather Nicholas Kendall.

At the end of the south aisle is a beautifully carved late medieval font, with a extremely large octagonal bowl carved with quatrefoil patterns.

The wagon roof in the south aisle is 15th century and boasts very finely carved bosses. Over the font are two bosses carved with Green Men faces.

Outside in the churchyard look for an ancient stone coffin with a head hole, found near the war memorial opposite the south porch. The coffin is thought to be Norman, and was found under the north transept floor during restoration work in the 17th century.

Almost opposite the church is a footpath next to the Crown Inn. The path leads behind the inn, down an overgrown lane to St Brevita's Holy Well.

Lanlivery church is very rewarding to visit, and the location is wonderful. The church is usually open daylight hours to visitors and was open when we visited. 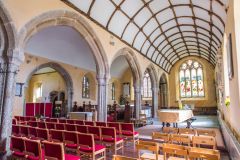 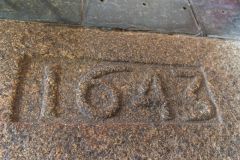 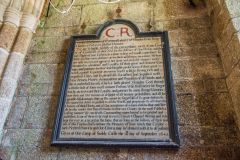 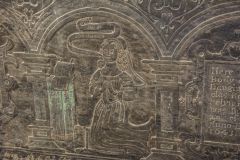 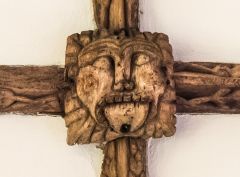 Self Catering near Lanlivery