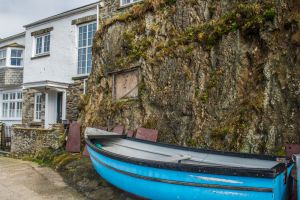 Explore the rich history of Mevagissey, from the Bronze Age through the infamy of smuggling, and the fascinating detail of village life in times past. The museum is housed in a dockside 18th-century building used to construct and repair smuggling vessels.

This free museum takes up three floors of a 1745 boat-builder's workshop on the inner harbour. The roof timbers are made of spars from smuggling boats, known as 'revenue-dodgers'. The building was erected flush against the rock-face. Boats were built on the ground floor, with a carpenter's shop above and a storage area on the top floor.

See a hand-turned lathe and tools used to repair these smuggling vessels when they became damaged.

There is much more to Mevagissey than its history as a smuggler's haven, though. See agricultural tools, including a cider press and apple crusher used to make the local cider. One fascinating piece of equipment is a horse-drawn barley thresher.

See what life was like in centuries past with a recreated traditional kitchen, complete with a fully functional cloam oven. These are small clay ovens, usually built into the side of a chimney, and often seen in traditional Cornish houses.

An archive of old photos shows what life was life in Mevagissey since the middle of the 19th century. The top floor exhibits showcase objects found on nearby beaches or captured in fishermen's nets.

Outside the museum entrance is the Armada Anchor, dating to 1588. The huge iron anchor was netted by a local fisherman, Colin Williams, near the Dodman in 1975.

Learn about local soapmaker Andrew Pears, born on the edge of Mevagissey. Pears moved to London where he spent years trying to invent a pure, clear soap. He finally achieved this by using glycerin and a mix of natural products, stored in old brandy barrels to create a distinctive smell. Pear's soap is still made, though not in Mevagissey!

Did you know that Mevagissey had its own currency? In 1801 Philip Ball founded the Ball & Son bank in Mevagissey and issued his own banknotes. The bank went bankrupt in 1824, but you can see the original front door, and even more fascinating, an 'official' Mevagissey 1 pound note. In an interesting twist, the 'Son' in the family bank, became the village doctor and helped treat the people of Mevagissey in the devastating 1849 cholera outbreak.

Here's another 'did you know'; Mevagissey was the first place in Cornwall to have electricity. See how the advent of electric power changed the lives of local people. Also on display are examples of pottery by Bernard Moss, who lived in the village from 1949. Learn the story of how Moss sold his design to a popular London shop after a chance encounter with the store owner.

It is great to see a museum of local heritage actually housed in a historic building! That, and the wonderful location beside the Inner Harbour makes Mevagissey Museum a must-see. The nearest parking is at the public car parks at River and Church Streets. The museum is open seasonally from Easter through autumn. 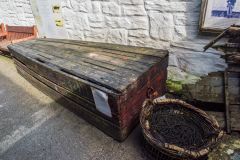 More self catering near Mevagissey Museum >>


He suffered bouts of mental illness throughout his reign