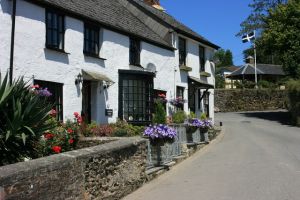 Lanreath is a pretty village near Looe, boasting some beautiful historic buildings. The church is 15th century, and has some finely carved bench ends and a medieval rood screen. Historic cottages and a fine old inn stand beside the village green, as does the 17th-century manor house.

The name of Lanreath's parish church is subject to a variety of spellings. I've seen it spelled Marnock, Marnack, and Marnarck, but I'm sticking with Marnarch, which is what the informative village website uses. According to a 15th-century chronicle, Lanreath was the last resting place of Marnarch, a 6th-century monk who became abbot at Caer Gybi, at Holyhead, Anglesey.

Just to confuse things further, the church was originally dedicated to St Sancredus. The dedication may be a curiosity, but the name of the village itself may provide a clue as to who established the first church here. The name Lanreath means the church of Raydhogh, though who Raydhogh is we do not know.

The walls are probably Norman, but most of the current building is 15th century, with alterations by GF Bodley in the late Victorian period. The oldest historical object in the church is the carved font, dating to the Norman period, while the roof is substantially 15th century.

The most striking memorial is an ornately carved wooden monument to Charles Grylls and his wife, crafted in 1623. The early 16th-century screen is one of the finest in Cornwall, with painted figures of saints set against landscape scenes.

The Grylls family built the manor house of Court Baron, near the church, around 1610.

This small museum of local heritage is housed in a former tithe barn, which now houses hundreds of historical objects related to life in Lanreath. The museum was founded by the Facey family in the 1960s and has continued to grow over the past 5 decades. Exhibits include the workings of an old mill, stationary engines, old telephones, and a steamroller, just to name a few.

The 'local' for Lanreath for almost 400 years, the Punch Bowl was the very first licensed pub in England in 1620. The building itself goes back much further, into at least the 16th century. Over the centuries the pub has been used as a coaching inn, courthouse, and a smugglers' den. 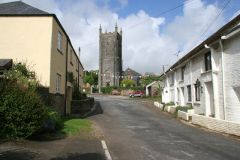 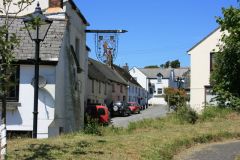 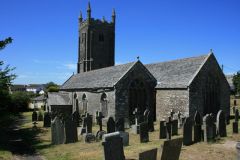 More self catering near Lanreath >>

More bed and breakfasts near Lanreath >>