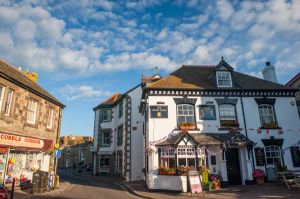 Marazion is one of the most beautifully situated of all south Cornish towns, with lovely sandy beaches, and the romantic spectacle of St Michael's Mount rising above Mounts Bay. Have a meal at the Godolphin Arms and look out at the cobbled causeway that leads to the castle and its island, or just walk along the shore of one of Cornwall's best beaches.

The castle that dominates the small island is just the latest in a long line of historic buildings on the site. The island was a busy centre for the tin trade and was perhaps the place known as Ictis to the ancient Greeks.

In AD 495 a local fisherman reported seeing a vision of St Michael on the island. A religious settlement grew up on the island as early as the 6th century. In the medieval period, a Benedictine monastery was established, with monks coming from Mont St Michel in France.

A military garrison was founded here, and in 1588 the first beacon was lit on St Michael's Mount to warn that the Spanish Armada had been sighted. The last military governor was Colonel John St Aubyn, who purchased the island and built a fortified stately home out of the old monastic buildings.

The island is now in the care of the National Trust, though the St Aubyn family maintain the Mount and is welcome tourists to explore the castle and the remarkable sub-tropical gardens that surround it.

The most common way to reach the island is by a tidal causeway curving out from Marazion, following in the footsteps of medieval pilgrims. If you have a chance to see the castle floodlit at night, reflected in the still waters of the Bay, it is a sight you won't soon forget!

Most people come to Marazion to visit St Michael's Mount, but the town is a perfect spot for seaside breaks. There are two sandy beaches, offering sweeping views from the picturesque fishing village of Mousehole to the Lizard peninsula. There is a promenade along the shore, above the beach, with wonderful views across the bay to St Michael's Mount.

On the ground floor of the town hall is a local museum, housed in what was once the headquarters of the Marazion fire brigade. The rear of the building was once used as the town gaol, and a reconstructed cell shows what life was like for miscreants held there.

The museum offers a fascinating collection of civic regalia, made even more interesting because Marazion no longer has municipal status. There is an exhibit on the HMS Warspite, a battleship that served in both World Wars. The Warspite earned more battle honours than any other ship in Royal Navy history.

Near the shore is the Memorial Garden, a small park area that once served as the town's burial site. A short climb up the hillside brings you to The Dollan, a striking viewing platform in Art Deco style given to the town in 1937 by Lord St Leven to commemorate the coronation of George V. The Dollan offers wonderful views out over Mount's Bay.

The South West Coast Path leads through Marazion to Mousehole, and just 4 miles distant are the remains of Chysauster Ancient Village.

I've been to Marazion many times, and I can't wait to get back. The atmosphere is amazing, and St Michael's Mount rising up out of the bay draws your eye like a magnet. 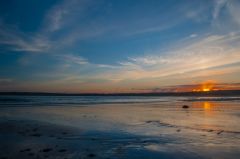 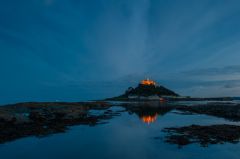 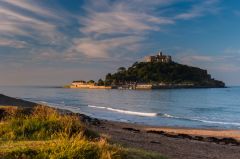 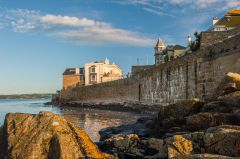 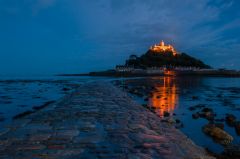 More self catering near Marazion >>

More bed and breakfasts near Marazion >>