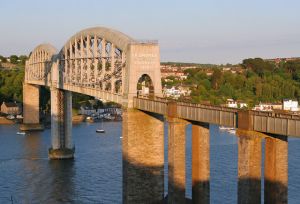 The Royal Albert Bridge in Saltash

A town on the Tamar estuary in southern Cornwall, on the border with Devon. Saltash is home to a bridge built by Isambard Kingdom Brunel in 1859 to carry the railway across the Tamar. As the first town on the Cornwall side of the river Saltash has traditionally been known as the 'Gateway to Cornwall', or as the town council rather grandly puts it, 'Cornwall’s 1st Place '.

The town grew up around a ferry run by fisherman, taking travellers to Trematon Castle and the monastery at St Germans. After the Norman Conquest the new lord of Trematon, Robert of Mortain, moved the local market to Saltash, and from this point, the settlement grew in importance to become a thriving town and regional centre.

There are 2 historic churches serving Saltash. St Stephens by Saltash stands well away from the town centre, but until 1821 it was the parish church. It dates to the 15th century, though it stands on much older foundations and retains a Norman font.

While St Stephen's served as the parish church a chapel was built in the town itself, dedicated to St Nicholas and St Faith. In 1881 this was made the parish church. The church retains several Norman features, including the west tower, a blocked south doorway, and much of the nave and chancel stonework.

The bridge linking Devon and Cornwall was designed by the famed Victorian engineer Isambard Kingdom Brunel and opened in 1859. It runs parallel to the modern Tamar Bridge, built in 1959. The bridge was dedicated to Prince Albert, Victoria's consort, who officially opened it to traffic on 11 April by walking from Cornwall to the Devon side.

The bridge is an astonishing piece of engineering, with a pair of arches spanning 455 feet each. Crowds of 20,000 people watched the trusses being lifted into place. The bridge has a place in history, being the first bridge in the world to be strengthened and widened whilst remaining open to traffic.

One place to view the bridge is from the Waterside area of Saltash. Here on Culver Road you will find Mary Newman's house, built in the 15th century. Newman was the first wife of Sir Francis Drake.

An old tale recounted by natives of Devon says that Cornishmen leave their tails in the cloakroom of Saltash railway station before crossing into Devon.

Just outside Saltash is Trematon Castle, with a stone keep dating to the 12th century. The fortification was begun shortly after the Norman Conquest, as a simple motte and bailey with timber defences, later rebuilt in stone. The circular keep stands on high ground overlooking Plymouth Sound. Within the castle fortification is a Georgian house erected in 1808.

Perhaps the most famous event in the castle's history came in 1580, when Elizabeth I ordered Sir Francis Drake to store treasure he had amassed on his circumnavigation of the globe at the castle before it was transported for permanent storage in the Tower of London.

Just 3 miles outside Saltash is the stately home of Antony House. Another historic house is Burrell House, built in 1621. 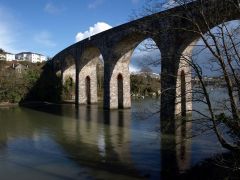 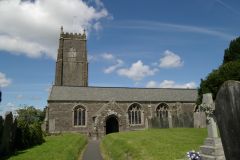 More self catering near Saltash >>

More bed and breakfasts near Saltash >>

Edith was the sister of Harold, who would be defeated at the Battle of Hastings