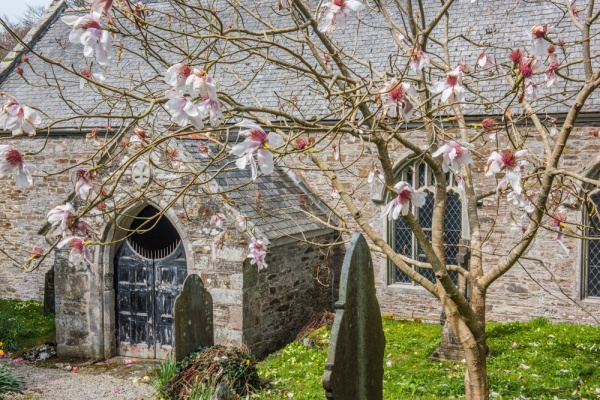 Veryan is one of the prettiest villages in Cornwall, known for its collection of unusual circular thatched cottages built by a former rector of St Symphorian's church. The church stands in the centre of the village, above the picturesque pond and opposite the village school.

The church dates to at least the 13th century, though the presence of a Celtic cross shaft near the war memorial suggests that there was a church here long before then. Another reminder of the church's great age is a carved wheel head cross set over the south porch near a carved head.

By contrast, the panel of carved faces on the west porch date to the Norman period. They may have been brought here in the 1830s from the chapel of St Nun at Grampound. The vicarage lodge contains a rose window from the chapel. The tower is also an early Norman feature and unusually stands on the south side of the nave rather than at the west end.

The nave arcade is 14th century. The font appears to be Norman but is probably a medieval copy of an original Norman design. It is of the Altarnun style, with carved heads at each corner of a large, square bowl and matching heads at the base of each supporting shaft. The tower arches were built around 1300 and the tower contains an original newel stair of stone. 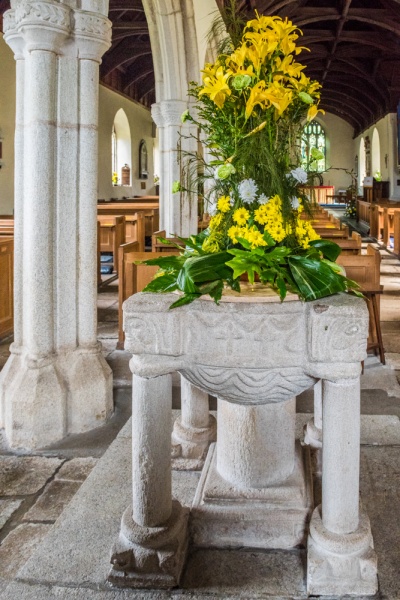 The medieval font in Norman style

The most interesting monument inside the church is to John Trevanion, the 13-year-old son of Richard Trevanion, who served as the Governor of Pendennis Castle in Falmouth. John died in 1712 and the lower half of his memorial tablet is empty, as if waiting for another name to be filled in.

Another very good memorial is an oval tablet to John Kempe (d. 1814) who left £100 to the church, to be invested in 'promoting Christian Knowledge amongst the Poor of this Parish, by the distribution of Godly Books, agreeably to ye Doctrines of the Church of England, at the discretion of the Vicar'.

One of those vicars was Jeremiah Trist (1773-1829), who followed his father in the post and whose son Samuel succeeded him. Jeremiah Trist was responsible for building the five round cottages that make Veryan such a popular place for visitors. He also established the village school and paid for the church clock.

Samuel Trist, the third of his family to hold the post of vicar, was responsible for the 1847 church restoration, directed by the prolific Victorian architect JP St Aubyn. He also built a grand mansion to replace the vicarage, reached by an impressive gatehouse and lodge. The Bishop of Exeter was not pleased, considering the vicarage 'too grand for the vicar of Veryan'.

During that 1847 restoration the original medieval roof was replaced, but several carved bosses and braces were retained. 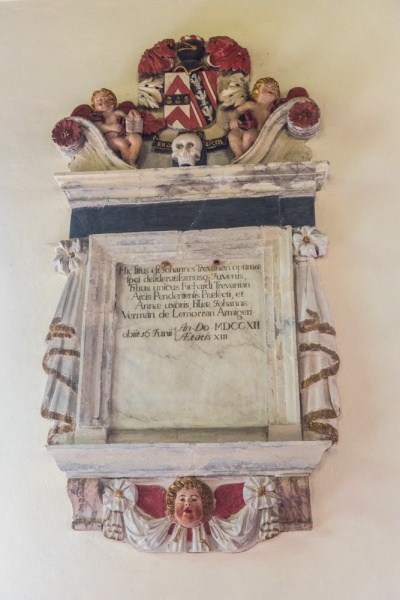 The first recorded vicar was appointed in 1309, shortly after the present building was completed.

Another Kempe memorial is to Charles Kempe (d. 1765), who acted as steward to Benjamin Foote, a wealthy landowner with properties throughout Devon and Cornwall. Kempe and his wife Ann had ten children, but five of them died young. The epitaph laments their loss, reading:

"Ten children was her lot to bear;
To mourn the loss of half, her fate severe,
O virtuous mother! Blest domestic wife!
God grant that ALL may meet in future life."

Another memorial commemorates Arthur Kempe, Admiral of the Red Squadron, who served at the Battle of Quebec in 1759 and died in 1823. 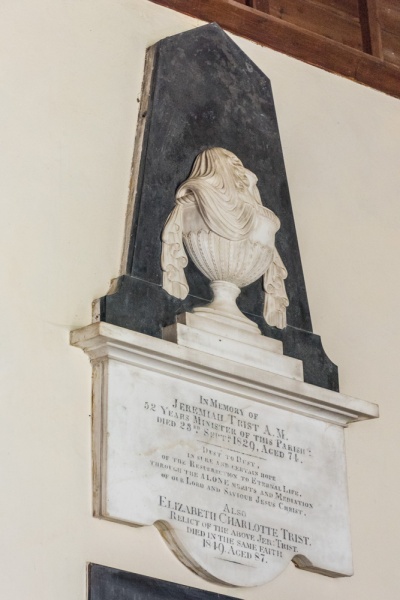 One final monument is worth a mention. One of Jeremiah Trist's daughters was Charlotte, who married John Gwatkin, a civil servant whose career took him to Madras in the service of the East India Company. When Jeremiah Trist died the couple returned to Cornwall. John's memorial reads in part:

After discharging faithfully the responsible duties of a civil servant of the HEI Company at Madras he returned to pass the remainder of his life in his native country, still active in public duties as a magistrate and Chairman of the Truro Union.

In every relation of life he was uniformly one of the most upright and high principled of men. Deeply mourned, his remains were placed in the adjacent family vault. This tablet is erected by his widow and three daughters.

One of those three daughters mentioned above was Charlotte, who was born in India in 1816. She married a regular soldier in the British Army named Henry Aylmer. One wonders what the parents thought about their daughter marrying an enlisted man, but if they had any misgivings they must have been put to rest, for Aylmer embarked on a glittering military career which saw him serve in the Crimean War and rise to the rank of Major General. 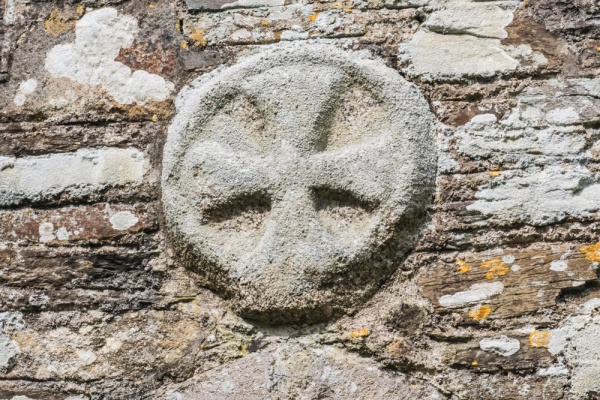 Other highlights include a church clock made around 1790 by Richard Willis. There are 6 bells, the oldest cast in 1740. The frame of the screen is possibly medieval, with two panels surviving from the late 15th or early 16th century.

In the churchyard is a gravestone to the crew of the Hera, which ran aground off Nare Head in 1914. Nineteen sailors lost their lives in the wreck, and they are commemorated with what is thought to be the longest grave in England.

There is a small unpaved car park in front of the church gates, and it is usually possible to find parking along the main road through the village. The church is usually open to visitors during daylight hours and it was open when we visited.

St Symphorian's is a beautiful historic building in a wonderfully picturesque setting and is well worth seeking out. Do take the time to explore the village, with its famous round houses. One can be seen at the top of the churchyard and another two just a short walk up Tollyfrank Hill. 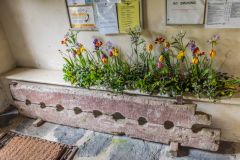 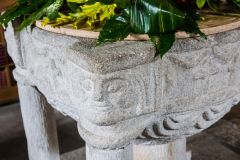 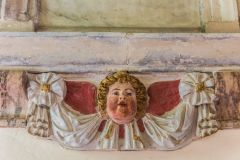 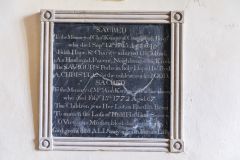 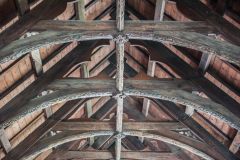 Self Catering near Veryan