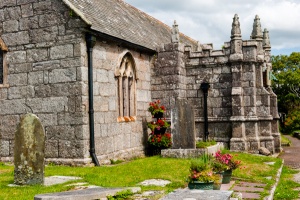 A large 15th-century church standing just off the town square of St Just, built in Perpendicular Gothic style. There is so much of historical interest that it is hard to know where to start describing it all!

The first historical feature is immediately obvious before you even reach the churchyard, for immediately beside the gate is a Celtic cross on a modern plinth. This has a large circular cross-head, carved with a simple figure of Christ on the cross. There is a second, worn cross, covered in lichen, but with the carving still discernable. 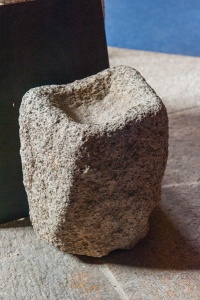 Inside the church the first thing you see is the font, to the west of the door. The font itself is not of any great age, but at its base is a small stone basin. This was found on nearby Cape Cornwall in the late 19th century near the ruins of St Helen's Chapel. It was thought to be a holy water stoup or font, but since the chapel did not have the right to baptise or keep holy water either use seems unlikely. So what is it? We don't know, but its shape and size suggest a very great age - well into the Celtic period.

The next thing you notice are the beautifully carved 15th-century capitals of the nave arcade. These are a variety of foliage patterns, some with vines and leaves on a horizontal band, some with shields, quatrefoils, and roses.

At the extreme north west corner of the church is a white ensign flown on the HMS Revenge at the Battle of Jutland in 1916. It was given to the church by Captain Russell Grenfell. The nave has some lovely 16th and 17th century carved bench ends. Some bear the arms of the local Arundell and Bosavern families; scallop shells and swallows. 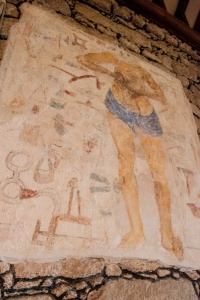 Christ of the Trades

Near the north wall is an upright stone slab, inscribed on all four sides. It is believed to date to the late 5th or early 6th century. There is a Latin inscription on one side that says 'Selus ic Iacit', or, 'Selus had me made'. Selus is thought to be St Selevan, the brother of St Just. One face of the stone has a chi-rho sign, an early Christian symbol.

Two marvellous medieval frescoes decorate the north wall. The first is a depiction of Christ of the Trades, showing Jesus clad only in a loin cloth, surrounded by the tools of various medieval tradesmen. Some are obvious to modern viewers, others are a bit more puzzling.

I could easily make out scales, a compass, a scythe, and what looks like a rake, but other implements are befuddling. The scene shows Christ blessing tools used by craftsmen in the parish.

The second wall painting shows St George and the Dragon. Unlike many medieval and later portrayals of the story, St George is not mounted and does not carry a spear; he is standing, wields a sword, and does not wear a helmet. An angel hovers over his shoulder while he battles the rather faded dragon. 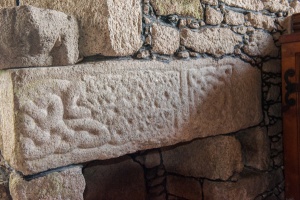 Further along the north wall is a carved Celtic cross shaft embedded into the wall. The carving is worn in places but clearly shows traditional interlace patterns. The cross probably dates to the 9th century.

In the north wall of the chancel is a canopied opening, thought to be an Easter Sepulchre.

On the south wall is a memorial tablet to Francis Oats (d. 1918), who was known as 'Diamond Ring'. Oats was an associate of Cecil Rhodes in South Africa, and made a fortune as one of the first chairmen of the hugely successful De Beers diamond company. The tablet also commemorates his three grandsons, all of who lost their lives in WWII.

Nearby is a touching 18th century memorial to a child, erected by his sorrowing mother.

He received his Dismission the XVIII of February MDCCLXXI from this Vale of Tears where the Fluctuating Scenes of Sorrow are perpetually changing, the mournful voice of Woe is ever heard ...

Note: Do not confuse St Just in Penwith with St Just in Roseland, also in west Cornwall!

The church is usually open daylight hours and is enormously gratifying to visit. It is easily one of the most interesting historic buildings in the Penwith area. 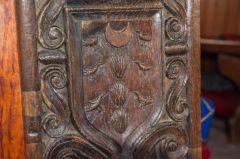 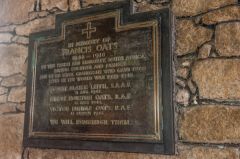 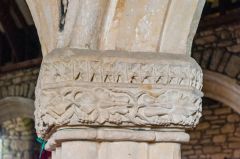 More self catering near St Just in Penwith

More bed and breakfasts near St Just in Penwith