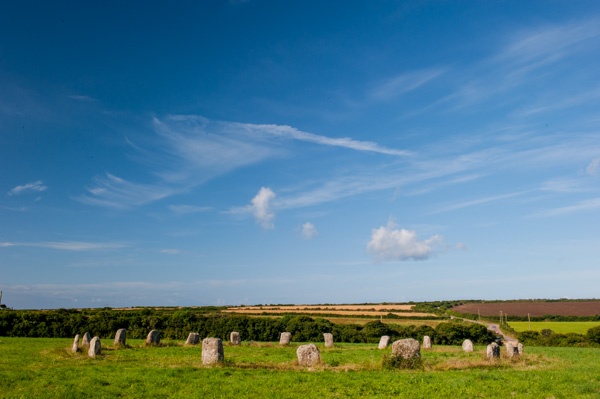 The Merry Maidens are a circle of 19 small stones in a field near Lamorna, on the Lands End to Newlyn road. This is probably the best-preserved of all the stone circles in Cornwall, and it is, unusually, believed to be complete and unaltered.

The circle is remarkably regular, being nearly perfectly circular, on a diameter of 78 ft (23.8 m), with the stones evenly spaced at 12-foot intervals (with a larger gap of 20 feet on the east side of the circle). A few of the stones are skewed out of alignment, the result of a well-intentioned 19th-century preservation effort by the local landowner, Lord Falmouth.

The stones were obviously arranged with care, for they gradually get smaller as you move from south-west to north-east. This suggests that they were arranged to mirror the wax and wane of the lunar cycle. The stones have been shaped carefully, with levelled tops and flat sides facing the interior of the circle. The tallest stones are 1.4m (about 55 inches).

Though the stones are not tall or impressive like more famous stone circles (think Avebury or Stonehenge), the setting more than makes up for that. I've been to the Merry Maidens a couple of times now and I find it really atmospheric and intriguing. 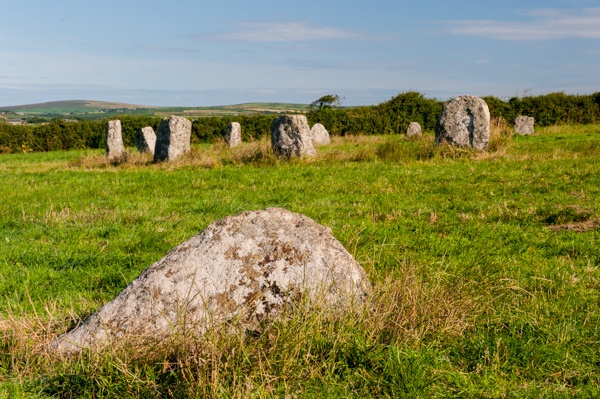 The stone circle from the eastern outlier stone

The Merry Maidens are so named because local legend tells that the stones were 19 maidens celebrating a wedding who were turned to stone for daring to dance on a Sunday. In the field across the road to the north is a pair of stones called The Pipers, who were supposedly the pipers who played the music for the maidens' dance.

There is no public access to the Pipers, so you will have to ask at the nearby farm for permission. The Pipers are the two largest standing stones in Cornwall, standing 4.1m and 4.6m high respectively.

The name probably comes from the Cornish 'Zans Meyn', meaning sacred stone, and was corrupted over time to become 'Dans Meyn', or dancing stone. This title was given generically to all Corning stone circles up to the Victorian period, suggesting that they were used for traditional rituals involving dances.

The story of the maidens turned to stone for dancing on the Sabbath is likely to be very recent, an effort by the Christian Church to deter people from observing old pagan rituals at ancient sites.

There is a small parking area by the field boundary to the south of the circle. From the parking area, you have to climb a stile and make your way across the field. A very short walk west along the road brings you to Tregiffian burial mound, an early Bronze Age chambered tomb in the care of English Heritage.

From the Merry Maidens, you can see a solitary standing stone tucked into a hedgerow. This is the Gun Rith Standing Stone, which may have formed part of a processional alignment with the Merry Maidens. 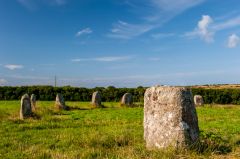 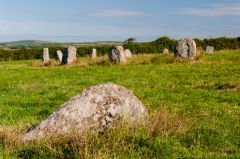 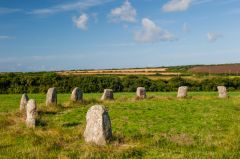 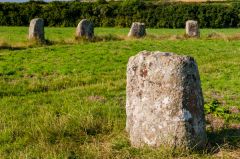 More self catering near Merry Maidens