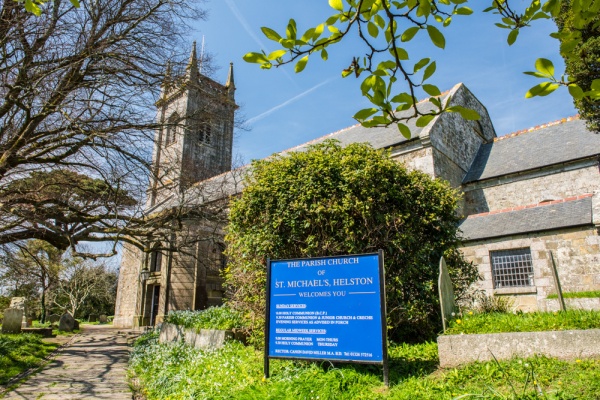 In 1729 a lightning strike destroyed the 12th-century church of St Michael in Helston. It took almost 3 decades for a new Georgian church to be built on the site of the medieval building.

In 1751 the Earl of Godolphin paid for a new church to replace the damaged medieval building. The new church was designed by Thomas Edwards, an architect from Greenwich, and took 10 years to complete. Edwards must have been familiar with St Alfege's Church in Greenwich, designed by Nicholas Hawksmoor, for the new St Michael's bears a striking resemblance to the Greenwich church.

The striking west tower is 150 feet high. The porch was added in 1830, with a staircase leading up to the west gallery. Inside the porch are several Elizabethan memorial brasses rescued from the old church.

The exterior of St Michael's looks like a traditional medieval church, but the interior is pure Georgian elegance, with a wide aisle-less nave leading to a rounded chancel arch shaped like an upside-down horseshoe. At the west end is a large gallery from which is hung a gilded royal coat of arms

One of the interior highlights is a huge brass chandelier given by the Earl of Godolphin. 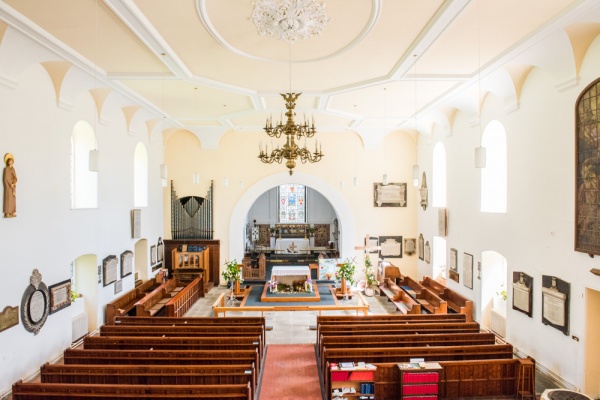 The church interior from the west gallery

Look for the colourful east window, designed in 1938 by Krugar Grey and depicting a pair of angels dancing the Furry Dance, a traditional folk dance popular in Helston since at least medieval times.

On the wall is a painted board commemorating the gift of Henry Penberthy (d. 1783) of an annuity to the poor of Helston, who were to be given material for their 'clothing, bedding, and accommodation' every 25 January forever.

On the wall is an oval plaque in memory of John Rogers, a former alderman of Helston, who died in 1768. It is interesting to compare the Rogers plaque, inscribed in English, with an ornate plaque to Robert Hooker, who died just a few years later in 1775, but whose epitaph is carved in Latin. 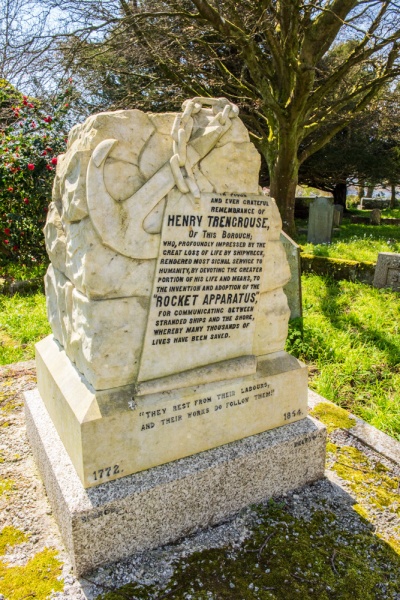 Outside the entrance to the south porch is the grave of Henry Trengrouse (1772-1854), inventor of the rocket-powered Bosun's chair device for saving lives at sea. Trengrouse witnessed the devastating wreck of the HMS Anson off Gunwalloe in 1807 and was inspired by the tragedy to invent a way to use rocket propulsion to fire a line to ships in distress.

He also invented one of the first lifejackets. Trengrouse has been called Helston's most famous native, and his inventions helped save thousands of lives around the world. There is an exhibit on Trengrouse's life and work at the Helston Museum on Market Place, and a cannon rescued from the wreck of the HMS Anson stands in front of the museum. 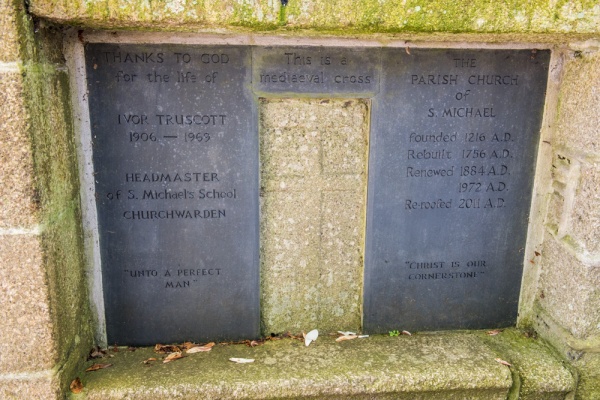 The medieval cross-slab set into a memorial plaque

At the south-east entrance to the churchyard is a carved section of a medieval cross-slab set into a low stone wall. The cross-slab measures roughly 0.8m by 0.35m. It is carved from granite in the form of a Latin cross in relief. Above the cross is a deep groove, and there are similar grooves on either side, forming a panel, or frame around the cross-head.

Above the slab is a memorial plaque made of slate, carved with the words, 'This is a medieval cross'. The cross-slab was first mentioned in 1936 and is thought to have formed part of a medieval coffin lid.

In the churchyard is a medieval wayside cross, standing just 0.5m high, with a traditional rounded 'wheel head'. Each face is carved a cross with equal length arms and splayed ends decorated with a thin bead. The wayside cross forms part of chest tombs to members of the Penberthy family. No one knows where the cross originally stood, but it formed part of a collection of antiquities held by Mr Penberthy of Porthleven.

St Michael's is a beautiful Georgian church, with a wonderful 18th-century interior that makes it well worth a visit. The church forms part of the town's heritage trail. The church stands just uphill of the old National School on Church Street, a very short walk north from Coinagehall Street. 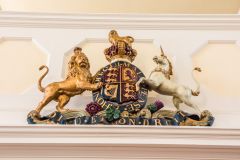 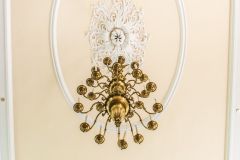