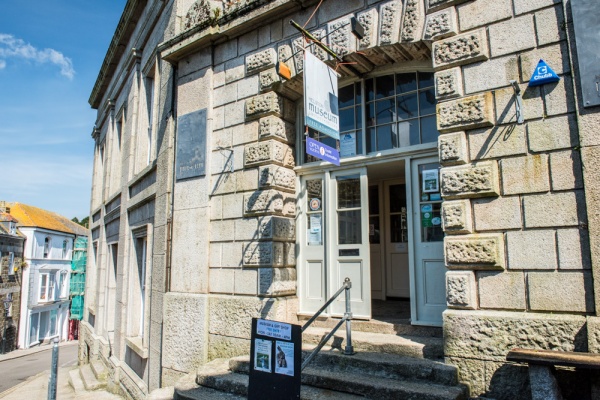 The Helston Museum describes itself as 'A Treasure Trove of Memories and Curiosities', and having explored the museum I'd say that 'treasure trove' is a pretty accurate description. The museum is housed in Helston's historical Market House and Drill Hall, with two floors of fascinating displays on the town's heritage.

The museum building is of great heritage value in its own right; it was built in 1837 to serve as a market hall, with one building devoted to selling butter and eggs, the other to selling meat.

This fascinating historical building is home to displays covering local history, geology, industry (specifically the farming, fishing & mining of Helston and The Lizard), archaeology, and costume, and also hosts a large photographic collection of local people, places, and events.

From prehistory to a recreated 1950s kitchen, the range of exhibits is remarkable. There are a staggering number of historical artefacts crammed into the museum and seeming to occupy every square inch of the interior.

In front of the museum entrance is a cannon rescued from the wreckage of the HMS Anson in 1807. One hundred sailors lost their lives in the disaster. A witness to the futile attempts to save the crew was Helston native Henry Tregrouse, who was inspired to invent a rocket-powered means of firing a lifeline to a stricken vessel. Tregrouse's life-saving inventions are the subject of a special exhibit.

There are so many interesting items from Helston's past it is hard to know where to start. One eye-catching item is a red whicker mail cart used by the post office for delivering parcels. Then there's a huge cider press made with heavy wooden beams, and a cider crushing contraption made with a huge stone wheel driven around a basin by means of a heavy timber axel. 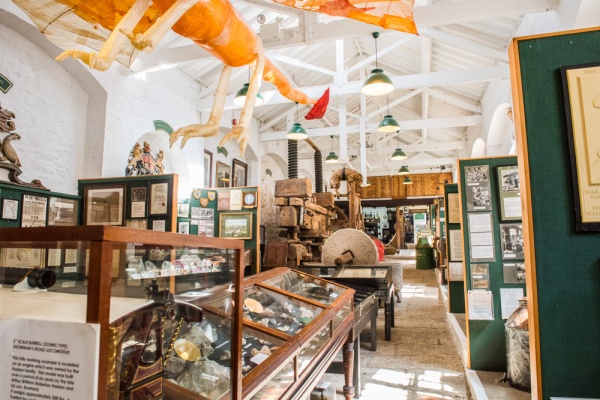 One oddity that caught my eye was an egg-shaped stone used in pagan ritual. The stone is thought to have been venerated as a symbol of fertility. It was discovered in the churchyard at Breage and given to the museum in 1939 by the wife of the vicar of Breage.

Another highlight is the walking stick used by inventor Richard Trevithick, a native of Cornwall. Trevithick was born in Illogan parish in 1771. A man of legendary strength, he stood 6'2" - at a time when Cornishmen were noted for being short and stocky. The walking stick has a brass top with the initial RT on it.

There is a very good recreation of a Victorian schoolroom, and, this being Helston, a fascinating exhibit on the traditional Furry Dance and the annual Flora Days festival. One of the Furry Dance artefacts is a 'Helston Furry Dance' nameplate made for Virgin Trains when the company adopted the name for a new train in 2002. There is a collection of Furry Dance memorabilia, including Victorian-era souvenir porcelain. 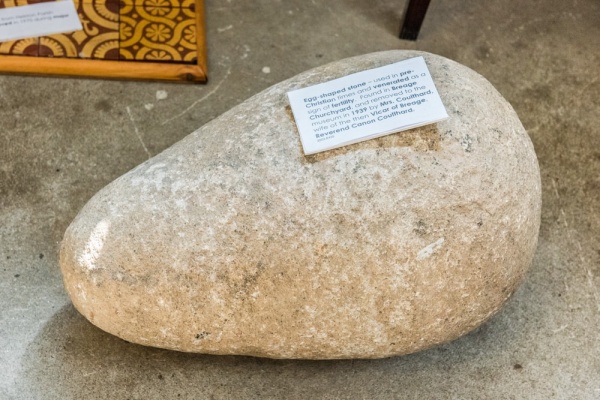 There is a fascinating reconstruction of a traditional Cornish fireplace with a hearth-spit turner made in Helston. The device was used to turn a spit of meat over an open fire.

There are also several examples of a Cornish cloam oven, a small clay oven built into a cottage hearth. Furze or gorse embers were placed into the oven. The clay absorbed the heat and when it was hot enough the embers were raked out and food placed inside the oven to bake with the clay door covering the opening.

There really is a bit of everything in Helston Museum. I spotted a 17th-century window uncovered during alterations to a building at No. 7 Meneage Street. Since glass was taxed, the window was made with a removable frame, held in place with lead ties, so that if you moved house you could take out the window frame, glass and all, and take it with you.

In addition to the regular museum exhibits, there is a special gallery suspended from the ceiling that houses a changing programme of art exhibitions and workshops.

I can't recommend the museum highly enough. To say that there is a lot to see is an understatement. The museum is simply bursting with fascinating exhibits. Our family enjoyed our visit immensely. As of this writing, the museum is free to enter. 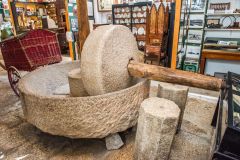 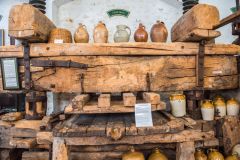 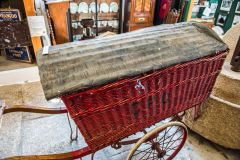 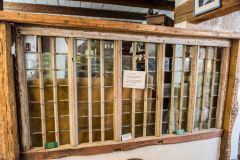 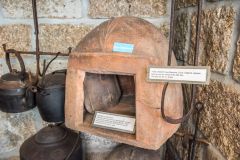 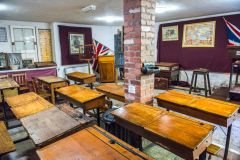 More self catering near Helston Museum