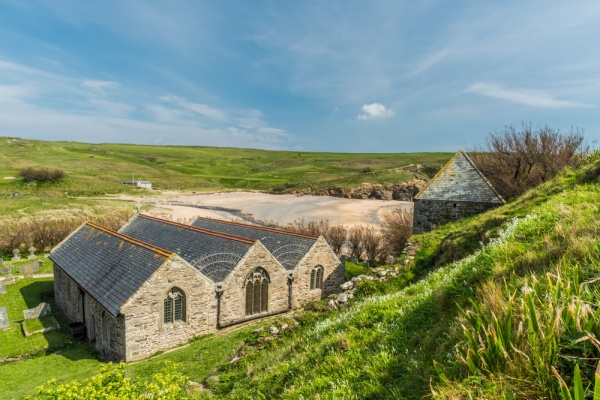 The picturesque medieval church at Gunwalloe sits low on the dunes overlooking a wide swath of sandy beach. The church is named for a 5th century Breton saint, who is said to have founded the first church on this site. It is the only church in Cornwall located on a beach.

The earliest mention of a church at Gunwalloe comes from 1332 when it was mentioned as a chapel connected to Breage. It seems likely that the first chapel served the manor of Winnianton. That early church stood beside a holy well, but no trace of the well remains.

Its exposed position has made the church a target for the fierce storms that can sweep this stretch of the Cornish coast and has led over time to the church's popular nickname, The Church of the Storms. 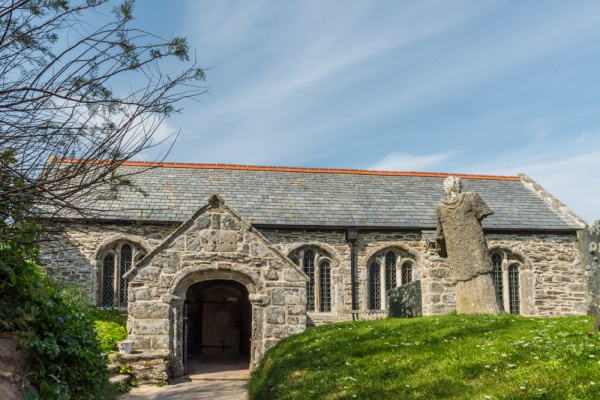 Winwaloe, or Winwallus, was a 5th century Breton cleric who founded and served as the first abbot of Landevennec Abbey in Brittany. He was the son of a prince of Dumnonia, the Brythonic kingdom that occupied most of modern Cornwall and Devon. He was born in Brittany around AD 460 after his parents fled there to avoid an outbreak of the plague.

He was educated by a British saint named Budoc, and later had a vision of St Patrick that convinced him to establish his own monastery. He founded his abbey on the banks of the Landevennec estuary and died there in AD 532. Churches dedicated to St Winwaloe were founded throughout Cornwall, Devon, and Wales, in addition to a monastery in Norfolk.

Tradition says that the saint founded the churches himself, though there is no record of him ever leaving Brittany, though he may well have sent his followers to spread the Christian message on the far side of the English Channel.

We do know that Gwenhael, his successor as abbot, definitely travelled to Great Britain, so it is quite possible that the British churches, including the one at Gunwalloe, were in fact founded by Gwenhael.

Gunwalloe church is built to a three hall design quite different from the traditional English rectangular layout. In this case, there are three short (54 feet long) rectangular halls of equal length, joined by gabled roofs like a set of triplets. The west end of the central hall acts as the nave, with the chancel occupying the east end of the hall.

The three halls are probably 15th century in date. To the south-west is a free-standing bell tower set well into the bank of a sloping dune. It is possible that parts of the west end may survive from the 13th-century church. 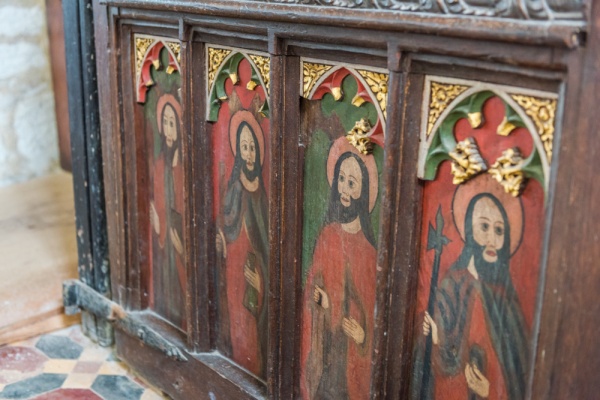 Tudor Screens from a Wreck

One of the most interesting historical features of the church is a 15th-century screen, painted with a depiction of the Crucifixion. The screen originally spanned the entire width of the nave and aisles. It was later cut down and two bays were reused as the north and south church doors. These reused sections of the medieval screen are painted with figures of the apostles.

A local tradition says that the screen was salvaged from the wreck of the Portuguese treasure ship The Saint Anthony, which ran aground at Gunwalloe on 19 January 1527. There is no evidence to confirm the tradition, and it is just as likely that wreck money was used to pay for the screen.

There are two fonts. The oldest is Norman, made of Pentewan stone carved with a tree of life design. It was discovered in the churchyard, where it presumably was cast after it was replaced by the second font, carved of granite in the 15th century to an octagonal design.

The church's location beside the beach led to inevitable incursions of sand, and church accounts show that sand had to be removed from the churchyard on a regular basis. There was once a west gallery, but this was removed around the time PJP Sedding restored the church in 1871. 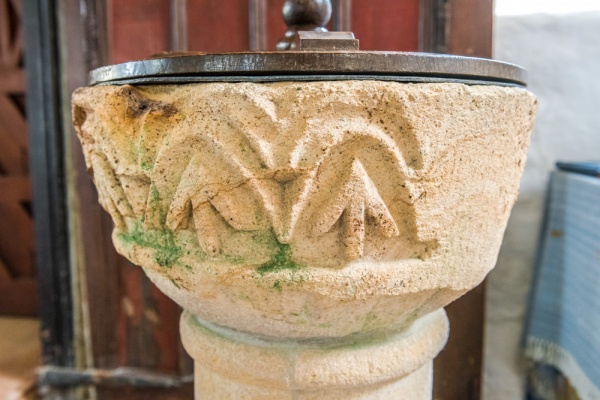 There is a pay and display car park near the end of the road through Gunwalloe village. From there follow the roas it it leads to the churchyard. The church is usually open to visitors.

The coastal setting is simply stunning. St Winwaloe's seems to crouch down, half hidden beneath the dunes, and yet a few steps from the church door bring you to a viewpoint looking down on the golden sand of Gunwalloe Church Cove. It is a glorious location, and one that will live long in my memory. 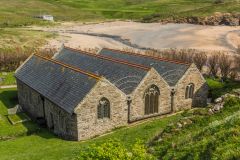 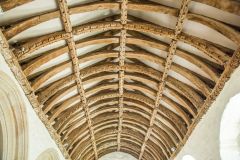 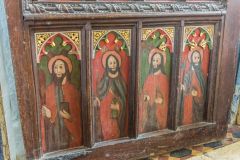 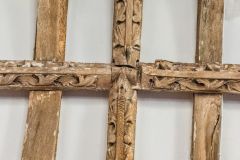 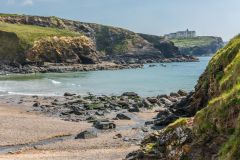 Self Catering near Gunwalloe