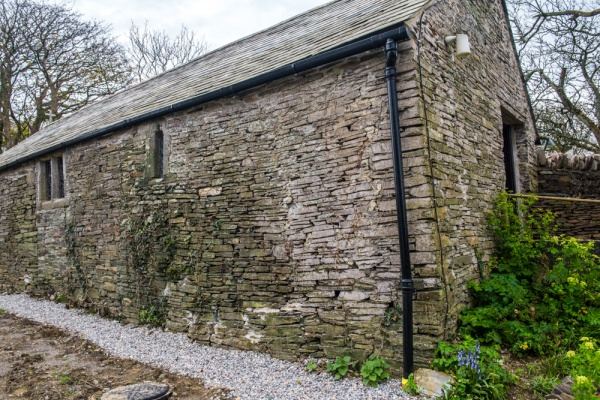 St Piran was a 5th-century Irish saint and abbot, perhaps synonymous with St Ciaran of Saigir. He is considered the patron saint of Cornwall, and his emblem of a white cross on a black background is used as the flag of Cornwall. Piran established his oratory near the coast at Perranzabuloe, which translates as 'Piran in the sand'.

Several churches dedicated to Piran sprang up throughout western Cornwall, and one was founded much further north, near Tintagel, at the small hamlet of Trethevy. We do not know when the first chapel was founded here, but in 1457 the Bishop of Exeter granted a license for Parson John Gregory to celebrate Mass in the chapel of Tintagel Castle, St Denys Chapel at Trevena, and in St Piran's chapel at nearby Trethevy.

This is the first record of a chapel at Trethevy, but it seems certain that the chapel stood on a site long considered sacred. It is now a chapel of ease for Tintagel parish. 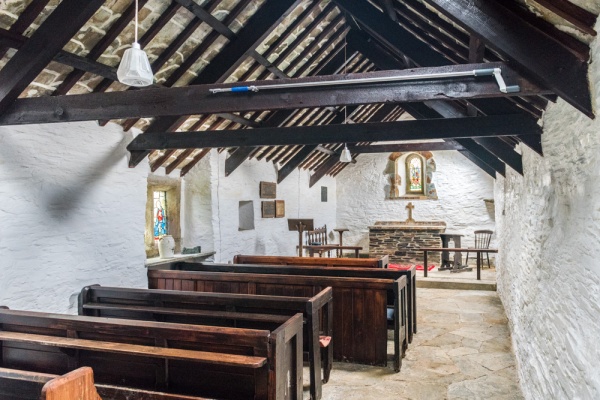 Just below the chapel is a dwelling named St Piran's House. Parts of the house are thought to be 14th century and may have formed part of a small monastery. The field above the chapel is still known as Chapel Meadow.

Very little is known about the chapel's early history, but it fell into decay after the Reformation and was abandoned. For many years it was used as a farm building, and it was not restored to ecclesiastical use until 1941. 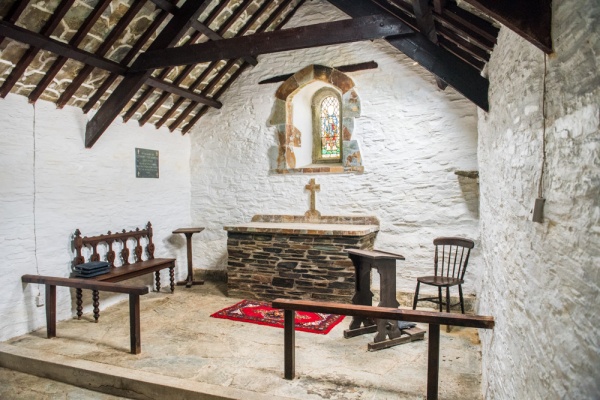 The altar and sanctuary area

During the restoration process a stone coffin was found near the chapel entrance, containing a skeleton with its feet towards the west. This suggests that the skeleton may have been that of a medieval priest.

The first service in the restored chapel took place on 8 February 1944. Tragically, the landowner, Sidney Harris who gave the chapel back to the Church of England' died in hospital on the following day.

Older residents of the parish remember that the chapel used to have stone pews of slate, but these were apparently used for local building projects including capping the drains below the holy well.

Until the early 20th century there was a large stone altar slab and an oak door frame. The outline of the door frame can still be seen. Until 1993 the chapel boasted an early medieval oil lamp made of granite, but the lamp was stolen in that year and never recovered. One local source suggests that the lamp was much earlier the the Norman period and may have been Roman.

The chapel was rebuilt in the early 21st century, but several ancient features remain, including a small lancet window with a trefoil head, set into the east wall, and a piscina against the south wall. In the north wall is a colourful modern stained glass window depicting St Piran against a backdrop of the Rocky Valley, which is perhaps misleading, for there is no indication that the saint actually ever visited the area.

The chapel is an extremely simple rectangular building under a slate roof. 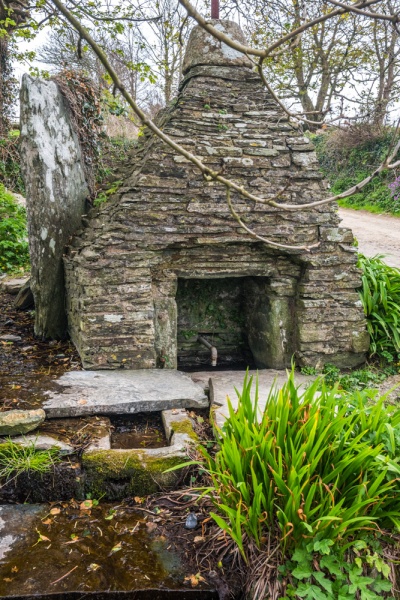 Across the rising lane leading up to the chapel is an ancient holy well, topped by a peculiar beehive-shaped wellhead. Atop the wellhead is an old iron cross of uncertain date, set in a granite cap. The stone cap is possibly part of an ancient font, though it could equally be something far more prosaic such as a mortar.

The wellhead is probably not of ancient origin, but the spring itself must be. At the back of the wellhead is a pump, installed in the 19th century to make it easier to supply water to the surrounding dwellings.

Just below the churchyard is a lane that leads to a footpath along the River Trevillet and eventually to St Nectan's Glen and Hermitage, said to have been the site of a 6th-century hermit cell established by St Nectan. 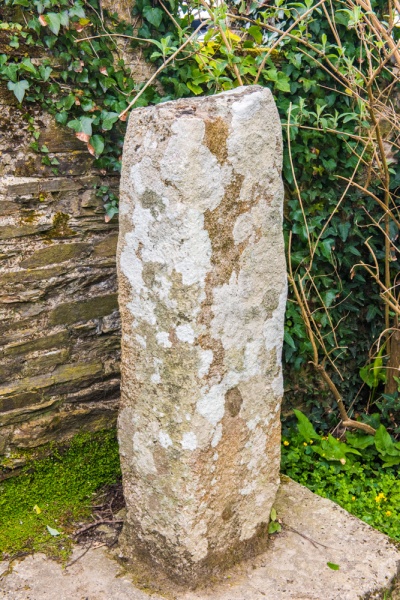 Near the start of the lane leading to St Nectan's Glen is a Roman milestone dating to the 3rd century. It was discovered in 1919 being used as a gatepost. The milestone is one of just 5 in Cornwall and one of 20 in England still in place. The Latin inscription reads:

which translates as ‘For the Emperor Caesars our lords Gallus and Volusian’.

This suggests that the stone dates to the short reign of the emperors Gallus and Volusian, from AD 251-253. There is another Roman milestone in St Materiana's church in Tintagel, suggesting that there was a major Roman road running near both sites.

St Piran's Chapel is usually open daylight hours to visitors and was open when we visited. Occasional services are still held here. 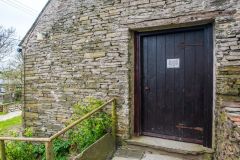 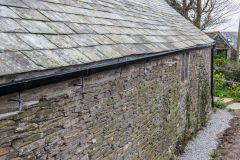