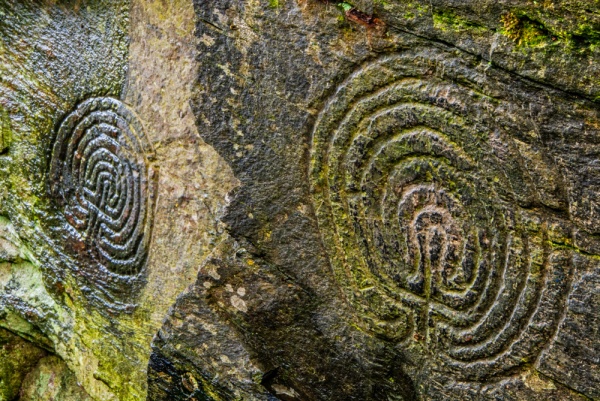 North of Tintagel and its famous castle the River Trevillet descends through a wooded gorge, passing the ancient hermitage of St Nectan and spilling over the waterfall known as the Kieve. From St Nectan's Glen, the river flows through beautiful woodland before plunging once more through a jumble of jagged rocks to the sea west of Trewethett Farm.

This final section of the river's descent is known as Rocky Valley. The power of the water made it a natural source of power for two mills. One of the mills, Trevillet, is now a private dwelling, but the other, 18th century Trethevy Mill, produced cloth and yarn until 1861 but now stands derelict.

Near the decaying mill buildings is an exposed rock face of dark shale, and onto the surface of the rock face have been carved a pair of mysterious labyrinth symbols, with concentric circular lines very much in the same style as the turf mazes that were popular in the medieval period. 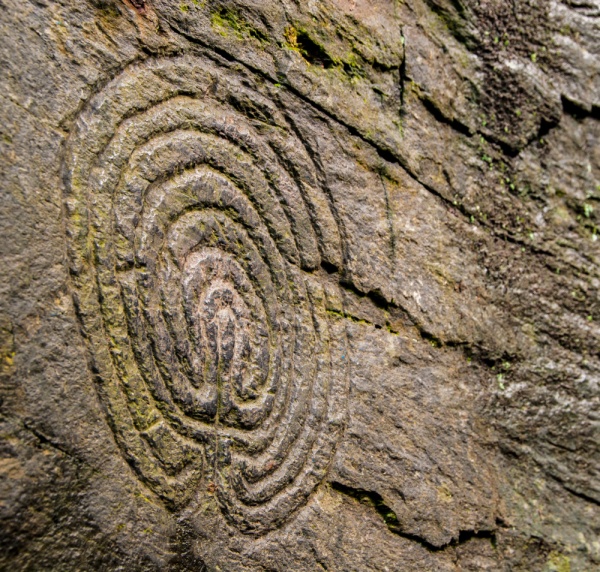 How old are the Rocky Valley Labyrinths?

There are (at least) three schools of thought on the age of the carvings. The most commonly quoted version suggests that they date to the Early Bronze Age (1800-1400 BC). Supporters of this view point to the similarities between the Rocky Valley carvings and carvings from Galicia, in Spain. There are some notable difference, however. The Spanish carvings are made on high ground, not in a valley bottom, but perhaps more tellingly, they are carved into relatively soft shale. Could they have survived 4000 years in such good condition?

A second theory is that the carved incisions in the rock face are so deep and crisp that they would have required metal tools, suggesting a date in the Celtic (Iron Age) period, roughly between 500 BC and AD 200.

A third theory is that the carvings are relatively modern, perhaps made by one of the mill owners. In support of that theory, there are several examples of dates and initials carved into stones on the mill. Could one of the mill's tenants have carved the labyrinths?

The carvings were discovered in 1948 by SJ Madge, who was writing a book of walks along the Cornish coast. The carvings were 'officially' brought to the attention of archaeologists in a 1954 article in The Illustrated London News. Excited archaeologists leapt on the presence of the carvings as proof of settlement by large numbers of Mediterranean people into Cornwall. It seems much more likely that the motif of a labyrinth emerged in the Mediterranean and diffused westward to the British Isles, rather than being brought directly by settlers. 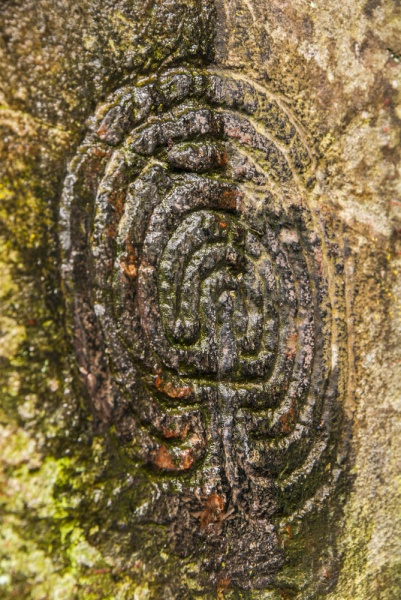 What makes the Rock Valley petroglyphs so fascinating, and so controversial, is that there are no comparable rock carvings anywhere in southern England. The theme just doesn't appear. The most complex carvings elsewhere in Cornwall are simple cup-marked slabs connected with burial sites.

The Rocky Valley Labyrinths have attracted large numbers of neo-pagan and New Age visitors in recent years. Many of these visitors are content to take only photos and leave with memories, but unfortunately, some leave behind small offerings such as coins, driven into the rock face with force. This has caused damage to the soft shale, and is a very real concern for the preservation of the carvings.

When we visited there were colourful ribbons hanging from a nearby tree, and a rather eye-catching metallic pinwheel. It certainly added colour to the site, though whether it added or detracted from the atmosphere is open to personal interpretation.

The labyrinth symbols have been interpreted in many different ways. They are said to be a Celtic fertility symbol or as a representation of the tree of life. Modern writers have suggested that the labyrinth was used by local witches to help induce states of altered consciousness. Alternatively, they are said to be a reminder of the Classical Greek cult of Ariadne and Dionysus. 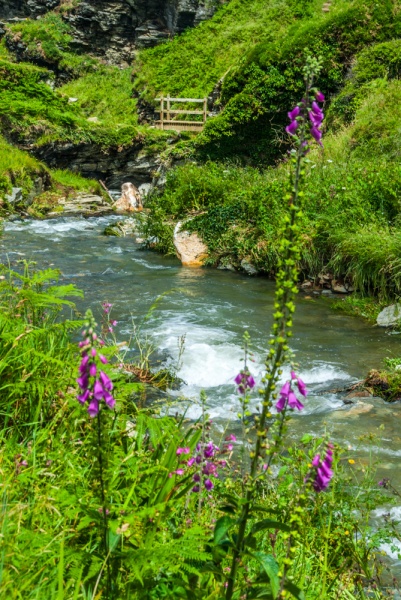 The River Trevillet from the Labyrinths

A more plausible theory is that the carvings are related to the early Christian hermitage at St Nectan's Glen, further up the river. We know that the hermitage was a destination for pilgrims as early as the 6th century, and it would make sense that pilgrims would have walked up the river from Rocky Valley to the hermitage. Could the labyrinths have been carved on the old pilgrim's path, and if so, what did they signify?

Finding the labyrinth carvings is straightforward. Just follow the footpath off the B3266 between Tintagel and Trethevy, opposite the minor road to Hagabron. Alternatively, take the South West Coast Path from either Boscastle or Tintagel, and turn inland when you come to the mouth of the River Trevillet. You will see the exposed rock face near the ruins of Trethevy Mill, and the carvings are quite easy to spot.

I took the longer route, starting in Boscastle and following the South West Coast Path along the cliffs. The scenery is simply stunning and well worth the exertion. Just follow the signposted path to Rocky Valley. When I visited one of the footbridges across the river was washed out, but I was able to find a safe place to leap across without too much trouble. 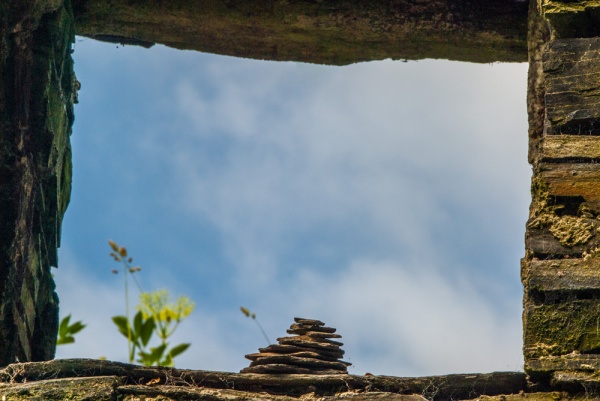 Ruins of the old mill near the labyrinths 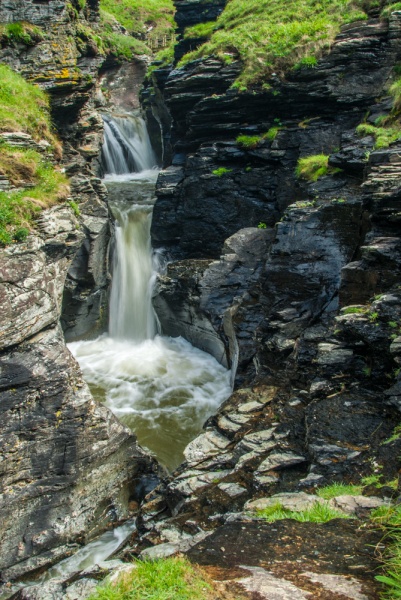 A waterfall on the River Trevillet 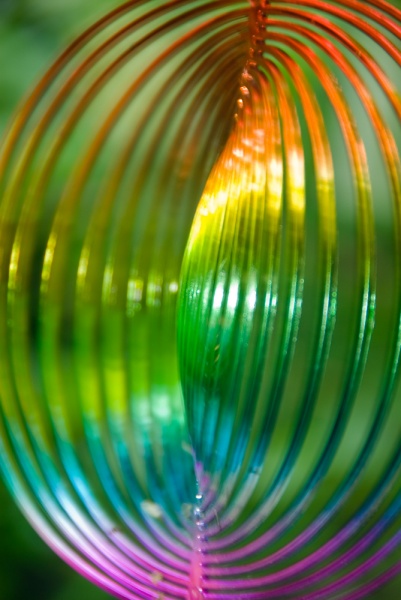 A colourful neo-pagan offering hanging over the labyrinth carvings