Self Catering in Cornwall - Tintagel 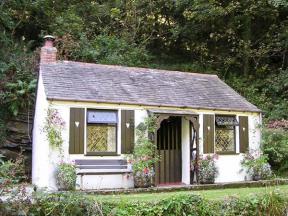 This cosy cottage is in St Nectan's Glen, a wooded valley, just one mile from Tintagel in Cornwall and sleeps two people.

Coachman's is a lovely cottage within St Nectan's Glen, a wooded valley of outstanding natural beauty, one mile from Tintagel in Cornwall. This property sleeps two people and has a mezzanine double bedroom as well as a ground floor family bathroom. The cottage also has an open plan sitting room and with dining area and woodburning stove, plus a kitchen.

Outside this cottage, there is ample off road parking and shared use of a lawned garden and patio with garden furniture and stream. Coachman's is a cosy romantic retreat and is perfect for exploring the area.

Memories
My husband and I stayted in the coachmans back in 1975 when I was about 18 we had a lovely holiday there. So this year for our 30th anniversary we decided to go back, the place hadn't changed much but had changed, we found it comfortable and warm in the evenings and there was a log burner if we got cold, the good change was there were stairs up to the hay loft where the bed is not a ladder which was there last time in the 70s, not sure we could of done the ladder now as my husbands 72.and when he went up there I would shout mind your head, the kitchen was nice and great bathroom and shower, there was a bit of a musky smell but the cottage is built up against the cliff. And it's old there was no sign of mould it was very clean. We had a lovely holiday there reliving the memories of all those years ago, Robin the owner was very friendly and helpful the only negative is maybe get the new mattress for us old ones. Thank you Robin for letting us relieve our youth.
Sally M
2019-09-07

Not fit for human habitation
My partner booked this so called "romantic" cottage for a week as a surprise holiday. The place looked charming and decently appointed, but what a disaster. The place stank so much of damp and rot that we that we checked out after the first night and moved to a bed and breakfast for the rest of the week. The owner was was totally disinterested and told my partner "If you have a problem with the cottage, move out". Sykes cottages denied any responsibility and have been most unhelpful. Our only recourse is now to take legal action.
George O
2018-07-28

A beautiful place to stay!
My partner and I have stayed in coachman's for the last three years. The cottage is perfect - it is immaculate in terms of cleanliness, warm, dry and comfortable. Although some reviews mention damp we have never experienced this in the slightest. The cottages are vintage but this adds to their charm! The cottage is incredibly romantic and quaint. We wouldnt have chosen to have our honeymoon here if not! Although it is situated near a road we have never been disturbed or heard any traffic. It is in walking distance of Tintagel - only 20 mins to half an hour which is perfect as the walk is stunning. The views from the cottage are also incredible. There is a bench directly outside which allows you to sit and observe the amazing gardens and listen to the relaxing stream. The owner could not be more helpful. Each time he has offered us a lift to the station as we do not drive. We booked out the cottage during our wedding and he moved heaven and earth to make sure any re-paving was completed in time as to not disturb any of our plans. We highly recommend staying in this gorgeous property and we will definitely be returning for a fourth year in a row!
Yavanna_x
2018-07-27

Absolutely terrible!
At the time of writing this England has been in the grip of a phenomenal heatwave that has lasted more than two weeks. Despite this, upon our arrival the cottage absolutely reeked of damp and mould. It is deeply unpleasant to spend any amount of time in the sitting area. What is also not disclosed is that the cottage is situated right at the entrance to the property, and because of the folks occupying the other cottages there is constant stream of traffic along a noisy gravel road, which passes only inches from the front door. The cottage is also not romantic in the least. It is dull, dark, depressing and mouldy. Really not conducive to romance! It was so bad that we left after only one night, which meant kissing goodbye to more than £600. The owner really couldn?t care less. Avoid at all costs! Other reviews on Google and Tripadvisor also mention the mouldy smell, so please don't think I have an axe to grind. Well, actually I do. I will most definitely be taking this up with English Tourism.
speak2kate
2018-07-07

AVOID!! Damp, musty smelling and uncomfortable.
My partner and I have recently been having short breaks away and have stayed in many lovely places but had to move out of Coachmans after one very uncomfortable night. The 'mezzanine ' floor is more of a shelf , is extremely uncomfortable and reached by a ladder which I, as a fit and able person felt was unsafe as it's treads have been so polished with years of use. The so called 'mezzanine' floor was so cramped my partner , who's 5' 3" had to continually stoop to avoid banging her head. Note that a review in 2012 said the place was 'dated' and personally I would describe it as merely VERY basic 'bunkhouse' type accommodation DEFINITELY NOT a ' romantic , character cottage'. The only clothes storage is a hanging space by the front door ,which is very inconvenient. We were kept awake through the night by the bathroom fan which kept switching itself off and then on again.The only way of keeping it quiet was to clamber down the ladder to remove the fuse from the fuseboard meaning there were then no lights! The place is built hard up against the side of the valley, which when we were there was running with water which explains the damp and musty smell as having windows on just one side of the property means it is not possible to properly 'air' the place. Consequently , to clear the musty smell we had to open the front door in the morning to get some amount of fresh air into the place . Not ideal in October !! We moved out having found a beautiful place with Classic Cottages who we would heartily recommend ..... Unlike Sykes Cottages, and the owner of this very poor accommodation , who are currently both refusing us any refund for the money we have wasted on our ruined holiday in Coachmans . Shameful !! I have never taken the trouble to write a review before , but I really felt it was necessary to set the record straight about this place, and the poor service I feel we have received from the owner and Sykes Cottages , who it turns out do not inspect their properties ,which I would suggest can then lead to misleading descriptions such as 'Romantic ,Character Cottage' .... ' Coachmans ' is certainly NOT that in my view!! Buyer Beware , of 'Coachmans' and Sykes Cottages!!
Chris N
2017-11-26

Get an Ordnance Survey map covering the Tintagel area.