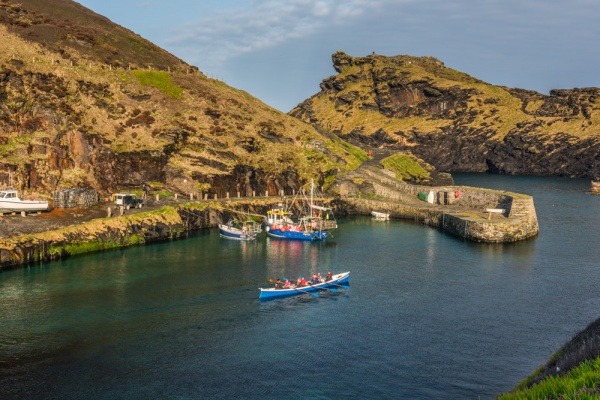 One of the most scenic villages on Cornwall's north coast, Boscastle has a postage-stamp sized harbour built to handle trade in slate from the nearby Delabole quarries. The village is located in an Area of Outstanding Natural Beauty, and the medieval harbour is maintained by the National Trust.

There is wonderful walking along the cliffs and inland, following swiftly flowing rivers. One trail leads beyond the harbour to Willapark headland where you can see a coastal lookout tower created from an old folly. Nearby are the ruins of an Iron Age cliff castle. 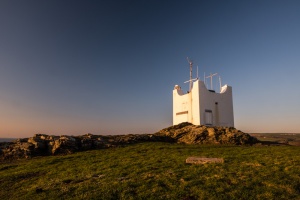 Inland of Willapark is Forrabury Stitches; an ancient field system composed of long strips separated by unploughed ridges. The field system was laid out in the medieval period but follows a system of farming begun in the Celtic period. The 'stitches', or strips, are still being farmed in a traditional way, with crops rotated each year and a fallow period when animals are allowed to graze the plot.

The quay was built in the Elizabethan period and has hardly been altered since. It helps protect the harbour, once one of the busiest in north Cornwall. Because the Cornish coast was such a dangerous place until the 19th century, boats would put in to Boscastle rather than attempt a dangerous landing elsewhere.

But even at Boscastle entering the harbour could be fraught with peril, so every ship was towed into the harbour by a 'hobbler' boat, rowed by 8 men, while more men on shore used ropes to keep the ship in the centre of the channel. Once ships were safely at anchor, goods were offloaded and put on carts. Strong teams of horses pulled the carts up the steep slope out of Boscastle. The horses were often kept at the Palace Stables, which is now the youth hostel.

The heyday of shipping and trade in Boscastle came to an end when the railway reached north Cornwall in 1893. Trade declined, and Boscastle dwindled in importance to become a base for pleasure craft. 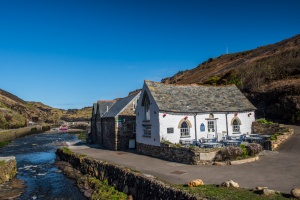 One of the unusual features at Boscastle is the Devil's Bellows. This is a blow-hole located under Penally Point. When conditions are right, rushing water through the blow-hole produces a horizontal jet of water that reaches almost halfway across the harbour mouth.

Beside the harbour is one of the most unusual museums in England, the Witchcraft Museum, a fascinating look at witchcraft in world culture, with a collection of objects associated with various forms of witchcraft around the world, from crystal balls and broomsticks to paraphernalia used for divination and spells.

If you follow the South West Coast Path north from Boscastle it leads you to the hanging valley of Pentargon, where Pentargon Falls plunges down almost sheer cliffs to the shore far below. You can see the waterfall from a viewing area on either side of the falls, though it helps if you don't suffer from vertigo!

Much of Boscastle and the surrounding area of coastline is owned by the National Trust. Part of the estate is Valency Valley, where novelist Thomas Hardy came as a young architect to restore the medieval church of St Juliot in 1870. Here he met his first wife, Emma, who was living at the rectory. Hardy used Valency Valley and the surrounding area as inspiration for his novel 'A Pair of Blue Eyes'.

In 1912, after Emma's death, Hardy paid for a memorial tablet, made by a stonemason from Boscastle, and you can see the memorial against the north wall of the church. A long but very enjoyable walk follows footpaths up Valency Valley to St Juliots then loops around to historic Minster Church, set in a glorious wooded glade, before returning to Boscastle by way of Forrabury.

Our family has visited Boscastle on several occasions and loved it. Our favourite memory is taking the coastal walk between Tintagel Castle and Boscastle, arriving just in time to get an ice cream from the National Trust cafe before they closed for the day. 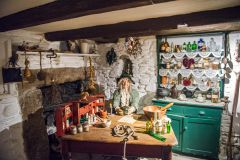 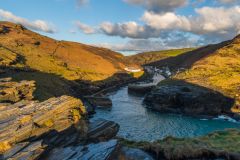 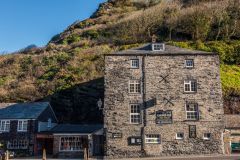 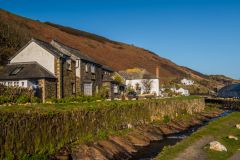 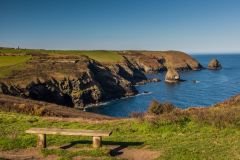 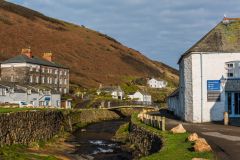 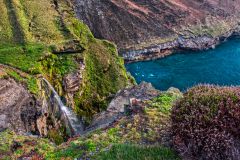 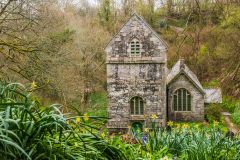 More self catering near Boscastle >>

More bed and breakfasts near Boscastle >>